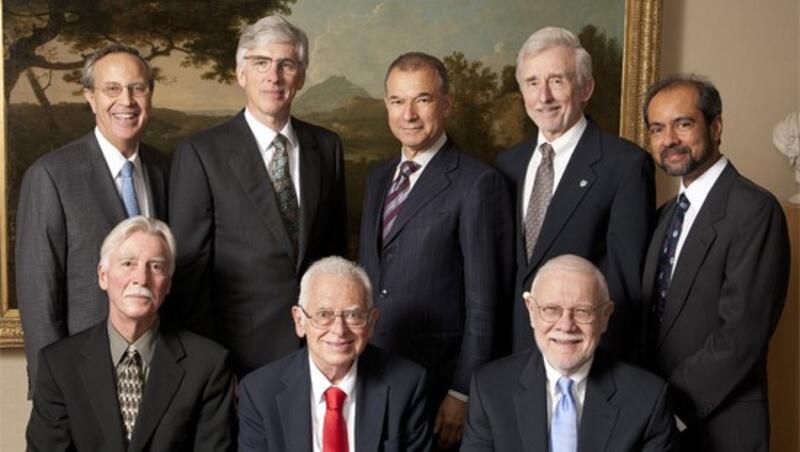 Stephen Greenblatt (B.A. 1964, Ph.D. 1969, English) is the Cogan University Professor of the Humanities at Harvard University. One of the world's leading literary scholar-critics, he is author of 13 books, including the recent biographical study, Will in the World: How Shakespeare Became Shakespeare (2004). Among his other groundbreaking books are Hamlet in Purgatory (2002), and Marvelous Possessions: The Wonder of the New World (1991). Greenblatt is general editor of The Norton Shakespeare (1997) and The Norton Anthology of English Literature (2006), 8th edition, and former president of the Modern Language Association. He has pioneered what has come to be called the “New Historicism,” a critical approach that considers works of literature in the context of the historical world in which they were written and read.

Greenblatt has been invited to give endowed lectures and keynote addresses at universities and scholarly conferences around the world. His many honors and awards include the William Shakespeare Award for Classical Theatre, given by the Shakespeare Theatre of Washington, D.C. (2005), the Independent Publisher Book Award for Biography (2005), the Mellon Distinguished Humanist Award (2002), and the Erasmus Institute Prize (2002). He is a Fellow of the American Academy of Arts and Sciences, the American Philosophical Society and the American Academy of Arts and Letters.

Fred Greenstein (Ph.D. 1960, Political Science) is professor emeritus of politics at Princeton University and a long-time leader in the field of political psychology.  In the course of his career, he taught at Yale (1959-62) and Wesleyan (1962-73), before joining the faculty of Princeton, where he served for many years and was director of the Research Program in Leadership Studies at the Woodrow Wilson School. He held several leadership roles in the International Society of Political Psychology and served as its president in 1996-97. He is a fellow of the American Academy of Arts and Sciences.

Greenstein helped establish the field of political psychology within the discipline of political science through his books, Children and Politics (1965) and Personality and Politics (1969). He explored the dynamics of effective presidential leadership and decision-making in his influential book, The Hidden-Hand Presidency: Eisenhower as Leader (1982, reissued 1994).  Among his other publications are Leadership in the Modern Presidency (1988), the eight-volume Handbook of Political Science (with Nelson W. Polsby, 1975), The Presidential Difference: Leadership Style from FDR to Clinton (2000) and The George W. Bush Presidency: An Early Assessment (2003).

Among his many honors, Greenstein has won the Harold D. Lasswell Award from the International Society of Political Psychology (2000) and the Career Service Award, Presidency Research Group, given by the American Political Science Association (2004).

Timothy J. Richmond (Ph.D. 1975, Molecular Biophysics and Biochemistry) has been a professor at ETH Zurich's Institute for Molecular Biology and Biophysics since 1987. Richmond is best known for defining the classic structure of the nucleosome, a subunit of chromatin composed of a short length of DNA wrapped around a core of histone proteins. Genomic DNA is packaged in chromatin, which plays a fundamental role in the regulation of gene activity.

Richmond’s work provides a basis for integrating decades of biochemical, physical, and genetic studies of chromatin. His focus has been to establish the atomic structures of large macromolecular assemblies, particularly those involved in protein-DNA complexes and to relate these structures to the biological processes of chromatin assembly and transcription regulation. His skill and creativity in both x-ray crystallographic and biochemical approaches to understanding macromolecular assemblies are unmatched by any other laboratory.

Richmond’s many honors include membership in the Academia Europae, the National Academy of Sciences, and the Deutsche Akademie der Naturforscher. He was awarded the Louis-Jeantet Prize in Medicine in 2002 and the Marcel Benoist Prize in 2006 for his contribution to elucidating the structure of nucleosomes, the basic building blocks of chromosomes, at an atomic level.

Paul Wender (Ph.D. 1973, Chemistry) is the Francis W. Bergstrom Professor of Chemistry at Stanford University and a world leader in the field of “green chemistry”— environmentally responsible chemistry that has a minimum of impact on the environment — and “function-oriented synthesis,” which has made major contributions to interdisciplinary research, especially in chemotherapy. His research involves the design and development of new reactions, methods, reagents, and strategies that introduce fundamentally new ways of synthesizing complex molecules of biological or medicinal significance. He also studies the molecular mode of action of these agents, as well as drug delivery and novel mechanisms for transporting them into cells.

Jon Butler, who served as dean of the Graduate School for six years, is the Howard R. Lamar Professor of American Studies, History, and Religious Studies at Yale. He is currently on a one-year leave to work on God in Gotham, a history of religion in Manhattan from the Civil War to the election of John F. Kennedy. In 2010 he received the Byrnes-Sewall Prize for Teaching Excellence in Yale College and the Edward Bouchet Leadership Award for Diversity and Equal Opportunity.

He grew up in rural Minnesota and earned his B.A. (1964) and Ph.D. (1972) from the University of Minnesota.  His books include Power, Authority, and the Origins of American Denominational Order (originally published in 1978 and reissued in 2009), The Huguenots in America: A Refugee People in New World Society (1983), which won the Saloutos Prize and the Chinard Prize; Awash in a Sea of Faith: Christianizing the American People (1990), which won the Outler Prize and the AHA Beveridge Award for Best Book in American History; Becoming America: The Revolution Before 1776 (2000); and Religion in American Life: A Short History (2003), co-authored with Grant Wacker and Randall Balmer, as well as many articles and reviews.