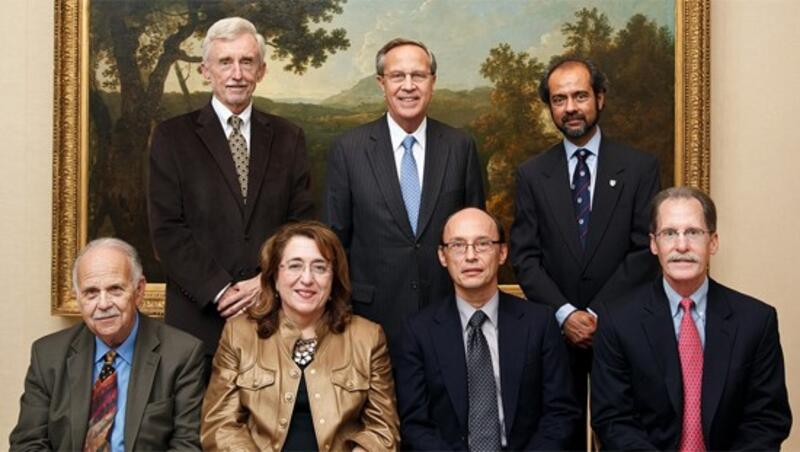 Stanley Fish (Ph.D. 1962, English) is best known as a public intellectual, one of the most prolific and important literary and cultural critics alive today.  He is the Davidson-Kahn Distinguished University Professor and Professor of Law at Florida International University, and has also taught English, political science, criminal justice, religion, and law at the University of California-Berkeley, Johns Hopkins, Duke, the University of Illinois, and Cardozo Law School. His lively, often irreverent essays on a wide range of topics appear regularly in The New York Times and on the editorial page of the Wall Street Journal. His 1967 book on English poet John Milton, Surprised by Sin: The Reader in Paradise Lost, not only turned the field of Milton Studies upside down but became one of the most influential books of literary criticism on any subject published over the course of several decades. His work on “reader-response criticism” drew attention to the process of reading and the significance of a reader's experience, creating an entirely new set of tools with which to make sense of literature. He is author of about 200 scholarly publications and over a dozen books, including Is There a Text in This Class? The Authority of Interpretive Communities; Save the World on Your Own Time; There's No Such Thing As Free Speech, and it's a Good Thing, Too; and, most recently, How to Write a Sentence: And How to Read One (2011), a celebration of the craft and pleasure of the sentence.

Leslie F. Greengard (M.D. 1987, Ph.D. 1987, Computer Science), professor of mathematics and computer science at New York University, is one of the world's leading applied mathematicians and computational scientists. He has made – and continues to make – fundamental contributions to his field that have changed the standards of what can be computed and how accurately it can be done. Working with collaborators, students and postdocs, he has creatively solved problems that conventional wisdom said were unsolvable. The Fast Multipole Method (FMM), which he introduced with his colleague Vladimir Rokhlin, was cited by the American Institute of Physics and the IEEE Computer Society as one of the top ten algorithms of the twentieth century. The FMM provides a way to calculate gravitational or electrostatic forces and solve problems related to Maxwell's equations. This algorithm and its variants are now at the core of large-scale simulation packages in molecular dynamics, quantum chemistry, chip design, radar analysis, remote sensing, fluid mechanics, and a host of other applications. Greengard's other work includes representation of electromagnetic fields, non-reflecting boundary conditions for wave propagation, and random dispersion — major discoveries in very different areas.
Greengard's honors include the American Mathematical Society's Steele Prize, shared with Professor Rokhlin, and election to the National Academy of Sciences and the National Academy of Engineering.

Bernice A. Pescosolido (Ph.D. 1982, Sociology) is Distinguished Professor and Chancellor’s Professor of Sociology at Indiana University and director of the Indiana Consortium for Mental Health Services Research. She is known for her groundbreaking research, outstanding teaching and mentorship, and impressive professional contributions. Serving on advisory boards and panels, she has shaped the issues she studies and influenced how sociologists think about teaching and learning. Her research focuses on the processes that promote and inhibit access to medical and mental health care, especially among disadvantaged populations. In the early 1990s, she developed a model that illuminated how people come to recognize the onset of health problems, respond to them, and make use of health care services. She has initiated major national and international studies of the stigmatization of people with mental illness.

Huntington F. Willard (Ph.D. 1979, Genetics) is the Nanaline H. Duke Professor of Genome Sciences at Duke University and the founding director of Duke's Institute for Genome Sciences and Policy. He has been a leader in genetics research since his doctoral dissertation on the biochemical genetics of human metabolic diseases, which resulted in 15 peer-reviewed papers in distinguished journals. Since then, he has written or co-written over 300 scientific publications and is co-author of Genetics in Medicine, a widely used textbook, now in its seventh edition.

Willard's most influential discovery was the mechanism of X chromosome inactivation in humans.  With colleagues, he identified a previously unknown transcript called XIST, which coats the chromosome from which it is expressed although it encodes no protein. His discovery of a mutation in the XIST promoter confirmed the role of this non-coding RNA in silencing one of the two X chromosomes in all mammalian females.

Willard has been president of the American Society of Human Genetics, chair of the Review Panel of Genome Canada, served on the Genetics Review Board of the Howard Hughes Medical Institute, co-founded the journal Human Molecular Genetics, and was a member of the Health and Human Services Secretary’s Advisory Committee on Genetics, Health and Society. His honors include the William Allan Award from the American Society of Human Genetics, a Faculty Excellence award from Duke University, and election to the American Association for the Advancement of Science.