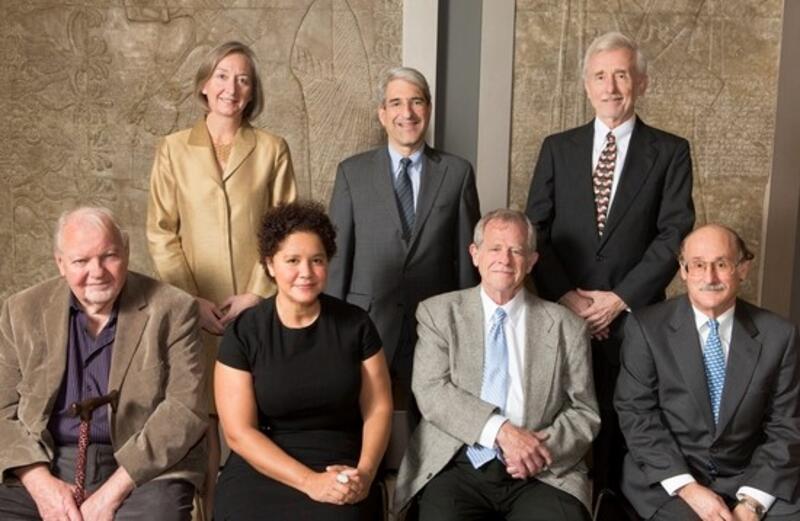 Frederic Jameson (Ph.D. 1959, French) is a world-renowned cultural critic, a brilliant scholar, an inspiring teacher, and a gifted academic administrator. He is currently the William A. Lane, Jr., Professor of Comparative Literature at Duke University, where he has been a member of the faculty since 1985. He established Duke’s Program in Literature and is the founder and director of that university’s Institute for Critical Theory. With Sartre, The Origin of a Style – his very first book, published by Yale University Press in 1961– he became a prominent voice in comparative literature. The Political Unconscious: Narrative as a Socially Symbolic Act (1981), which laid out the parameters of Jameson’s multi-layered social and historical interpretation of texts, is one of the most cited of all works on English language literary theory in the past fifty years. Jameson’s intellectual range includes Marxist criticism and esthetics, modernism and post-modernism, science fiction, Third World literature and cinema, and more. He is the author of 25 books of criticism and over 150 articles, which have been translated into languages as diverse as Catalan and Chinese, French and Korean, Polish and Japanese. A dedicated and gifted teacher, Jameson has mentored generations of graduate students and young scholars. His honors include Fulbright and Guggenheim fellowships, the Modern Language Association’s William Riley Parker Prize (1971) and James Russell Lowell Prize (1990), election to the American Academy of Arts and Sciences, and the Holberg Prize, awarded by the Norwegian parliament in 2008.

Alan M. Lambowitz (Ph.D. 1972, Molecular Biophysics and Biochemistry) is director of the Institute for Cellular and Molecular Biology at the University of Texas at Austin, where he runs a ground-breaking lab and holds two endowed professorships. Lambowitz’s pioneering research combines genetic, biochemical, and structural approaches to investigate gene expression, RNA splicing, mobile self-splicing introns, and retroviral-like genetic elements. Among other outstanding accomplishments, his lab discovered and described Neurosporamitochondrial retroplasmids — the simplest retro-element — laying the groundwork for tracing the evolution of modern retroviruses such as HIV back to much simpler RNA viruses. His work on an enzyme involved in both protein synthesis and mRNA maturation established that unrelated enzymatic functions can be integrated in a single complex molecular structure. He devised a method to target a specific gene in an organism’s DNA to alter its biological function. This work provided an important foundation for gene therapy and genetic surgery. Author of nearly 200 research papers and co-author of two books, he also holds several patents on his work with DNA and RNA. Before joining the faculty at UT in 1997, he was the Ohio Eminent Scholar in Molecular Genetics and a professor at Ohio State University. His honors include membership in the National Academy of Sciences; the American Academy of Arts and Sciences; and the Texas Academy of Medicine, Engineering, and Science; and being named a Fellow of both the American Academy of Microbiology and the American Association for the Advancement of Science.

Theodore J. Lowi (Ph.D. 1961, Political Science) is a scholar whose influence has extended far beyond academia. The End of Liberalism (1969) is considered one of the most influential books ever written by a political scientist. Challenging the belief that the American political system was driven by pluralism and asserting that “interest-group-liberalism” was the true driving force, the book became an instant classic. Lowi also pioneered the systematic study of public policy, identifying “distributive,” “redistributive,” and “regulatory” sectors. He is the John L. Senior Professor of American Institutions at Cornell University, a position he has held since 1972. He has written or co-written more than 20 books and over 200 articles. His textbook, American Government: Power and Purpose (with Benjamin Ginsberg, Kenneth A. Shepsie, and Stephen Ansolabehere), is in its thirteenth edition, and We the People: An Introduction to American Politics (with Benjamin Ginsburg, Margaret Weir, and Robert J. Spitzer) is in its ninth. He is co-editor, with Isaac Kramnick, of The Norton Anthology of American Political Thought and author of The Personal President: Power Invested, Promise Unfulfilled (1986), Arenas of Power (2009), and more. His recent work focuses on the politics of globalization, the history of the Democratic Party, and a computer project that links information to methodology. Elected to the American Academy of Arts and Sciences in 1972, Lowi is the recipient of several honorary degrees and was president of the American Political Science Association, the Policy Studies Organization, and the International Political Science Association.

Annette Thomas (Ph.D. 1993, Biology) was named CEO of Macmillan, one of the world’s leading publishing houses, fifteen years after completing her dissertation on the shared properties between pancreatic insulin secreting cells and neurons. After earning her Ph.D. from Yale in biology in 1993, Thomas began her career as cell biology editor for the journal Nature, where she selected which cell biology and neurosciences manuscripts would be published. Her “profound scientific knowledge, outstanding intelligence and amazing sense for publishing” were quickly recognized, says Stefan von Holtzbrinck, president of Holtzbrinck Publishing Company, which owns Macmillan. Thomas rose quickly through the ranks. After launching the highly successful Nature Insight program, she started Nature Cell Biology and less than a year later, launched the Nature Reviews series. The Nature Publishing Group (NPG) made her president and managing director, with overall editorial and financial responsibility. Under her leadership, NPG expanded into the physical sciences and clinical medicine and became a leading innovator in digital publishing. Thomas is now CEO of Macmillan Science and Education, a global array of science, scholarly and education businesses in which NPG is included. In her years at the helm, she has developed innovative divisions and promoted science education at every level. She is a member of the board of directors of the Verlagsgruppe von Holtzbrinck and an advisor to Creative Commons. She was the first publisher to join the advisory board of the National Institutes of Health.