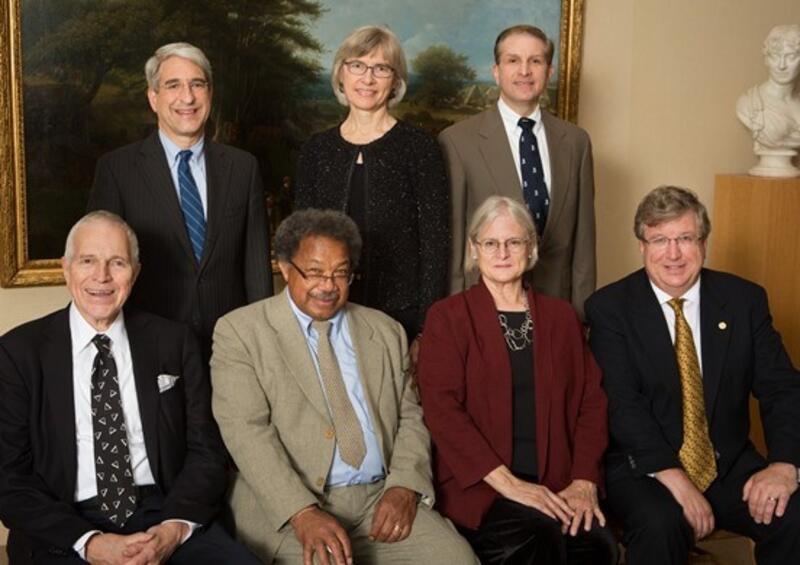 Eric Fossum (Ph.D. 1984, Engineering and Applied Science) is a scientist, inventor, entrepreneur, and educator. While working on interplanetary spacecraft cameras for NASA at Caltech’s Jet Propulsion Laboratory in the 1990s, he conceived a way to produce an ultra-small, inexpensive “camera on a chip” that is now an essential element in billions of cell phones and tablets around the world. His groundbreaking work incorporating imaging-sensing devices onto semiconductor chips has changed the way people communicate and enhanced not only social media, but also medicine (pill cameras), the automotive industry (side-view and rear-view cameras), and filmmaking. He co-founded Photobit Corporation in 1995 to commercialize the technology, and worked for Micron Technology Inc., when it acquired Photobit. He was CEO of Siimpel Corporation, developing micro-electro-mechanical-based camera modules with autofocus and shutter functions for cell phones. In 2008 he joined Samsung Electronics as a technical consultant. For his pioneering work on CMOS (complementary metal-oxide semiconductor) image sensors, the Institute of Electrical and Electronics Engineers honored him with the Andrew Grove Award in 2009. He was inducted into the National Inventors Hall of Fame in 2011, and in 2013, he was elected to the National Academy of Engineering. After fifteen years in the private sector, he returned to academia in 2010 as a faculty member of the Thayer School of Engineering at Dartmouth, where he teaches, conducts research, and coordinates the PhD Innovation Program. Fossum holds more than 180 patents and has published over 250 journal articles.

Thomas Holt (Ph.D. 1973, American Studies), is the James Westfall Thompson Distinguished Service Professor of American and African American History at the University of Chicag. He has transformed and deepened scholars’ understanding of American, Caribbean, and transatlantic history; the African diaspora; and race relations. His first book, Black over White: Negro Political Leadership in South Carolina During Reconstruction, placed African Americans at the center of that era’s social and political history. It won the Charles S. Sydnor Prize from the Southern Historical Association and became both an instant classic and required reading for generations of students. His second book, The Problem of Freedom: Race, Labor, and Politics in Jamaica and Britain, 1832-1938, won the Elsa Goveia Prize from the Association of Caribbean Historians. The Problem of Race in the 21st Century, the published version of his Nathan I. Huggins lectures at Harvard University, re-envisioned the history of race relations in the United States. His most recent book, Children of Fire, is a magisterial survey and reinterpretation of African American history.  Holt was elected president of the American Historical Association. His honors include a John D. and Catherine T. MacArthur “genius” grant and fellowships from the John Simon Guggenheim Foundation, the American Academy in Berlin, and the Social Science Research Council. He has served on the Council of the National Endowment for the Humanities and on the board of the American Council of Learned Societies and is a fellow of the American Academy of Arts and Sciences.

Kristin Luker (Ph.D. 1974, Sociology), trailblazing thinker, dedicated mentor, and public sociologist, is largely responsible for creating a new field of study focused on the intersection of reproductive rights and the American justice system. Her scholarship spans sociology, law, gender, family, and sexuality.  Luker is the Elizabeth Josselyn Boalt Professor of Law, professor of Sociology, and founding director of the Center on Reproductive Rights and Justice at the University of California, Berkeley. Her books have influenced public discourse and won major awards. Abortion and the Politics of Motherhood was nominated for a Pulitzer Prize, and Dubious Conceptions: The Politics of Teenage Pregnancy was listed as a New York Times Notable Book of the Year. Her most recent books are When Sex Goes to School: Warring Views on Sex – and Sex Education – Since the Sixties and Salsa Dancing Into the Social Sciences: Research in an Age of Infoglut, a highly original, engaging, and unorthodox manual for teaching research methods. Luker’s pioneering work has been recognized by her election to the American Academy of Arts and Sciences and to the Sociological Research Association, which limits its membership to 150 scholars. Other honors include the Innovation in Scholarship Award from the Center for Reproductive Rights in New York and grants from the National Endowment for the Humanities, the Commonwealth Fund, and the Ford, Spencer, and Guggenheim foundations.

Nobel Laureate Edmund Phelps (Ph.D. 1959, Economics) has changed the way theorists and policy-makers understand the interconnected macroeconomic issues of growth, employment, inflation, and stagnation. A prolific scholar, he has published 22 influential books and more than 100 major papers. Phelps was awarded the Nobel Prize in Economics in 2006 for “his analysis of inter-temporal tradeoffs in macroeconomic policy,” according to the Royal Swedish Academy of Sciences. His work on growth theory stimulated a wave of research on how much a nation should spend and how much it should save for future generations. His models have proven to be ahead of their time in recognizing the importance of education and technology.  Phelps is the McVickar Professor of Political Economy and director of the Center on Capitalism and Society at Columbia University, where he has been on the faculty since 1971. He has advised governments and international organizations and was a charter member of the Economic Advisory Council of the European Bank for Reconstruction and Development. He has consulted for the U.S. Treasury Department, the Senate Finance Committee, and the Federal Reserve Board.  His many awards include honorary doctorates and election to the National Academy of Sciences and the American Economic Association. The French government named him a Chevalier de la Légion d’Honneur and the Kiel Institute in Germany awarded him its Global Economy Prize. He has won the Russian Academy of Sciences’ Mendeleev Medal and the President’s Medal of the National University of Ireland, Galway.