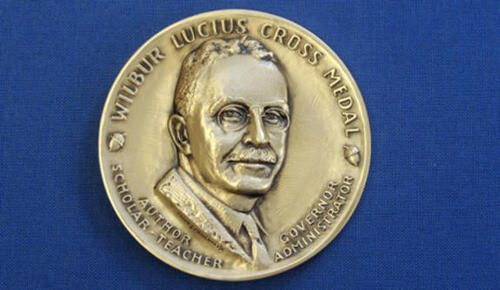 Four alumni of the Yale Graduate School of Arts and Sciences will receive 2019 Wilbur Lucius Cross Medals for Alumni Achievement in honor of their outstanding work.

The Cross Medal recognizes the continued legacy of service and excellence inaugurated by Wilbur Lucius Cross (Ph.D. 1889), who served as dean of the Graduate School from 1916 to 1930, and governor of Connecticut from 1930 to 1939. 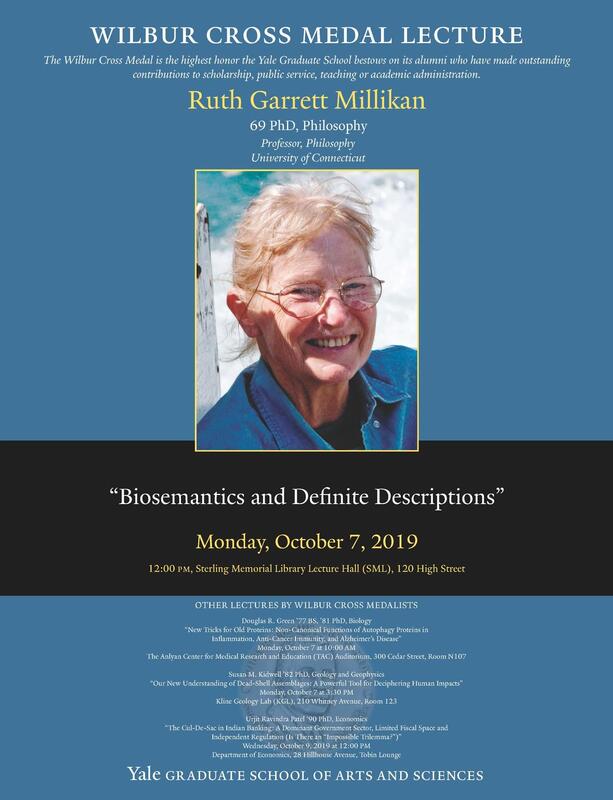 Millikan received her Ph.D. in philosophy from Yale in 1969. A student of Wilfrid Sellars, she has written prolifically since the publication of her first book, “Language, Thought and Other Biological Categories,” released in 1984. Known as a philosopher of biosemantics or intentionality, Millikan has applied a broadened notion of selection, of which “natural selection” is one example, to cast light on traditional and current philosophical debates. Her most recent book, “Beyond Concepts: Unicepts, Language, and Natural Information,” published in 2017, has been called “a great philosophical achievement”; in it, Millikan develops an influential account of cognition and language, applying contemporary evolutionary theory to a number of traditional philosophical problems. Millikan has taught at Berea College, the University of Western Michigan, and the University of Connecticut, as well as several foreign universities. A member of the American Academy of Arts and Sciences, she has received the Jean Nicod Prize in Cognitive Science, the Rescher Prize for Systematic Philosophy, and the Rolf Schock Prize for Logic and Philosophy, a prize also awarded to Willard Quine, John Rawls and Hilary Putnam, among others. 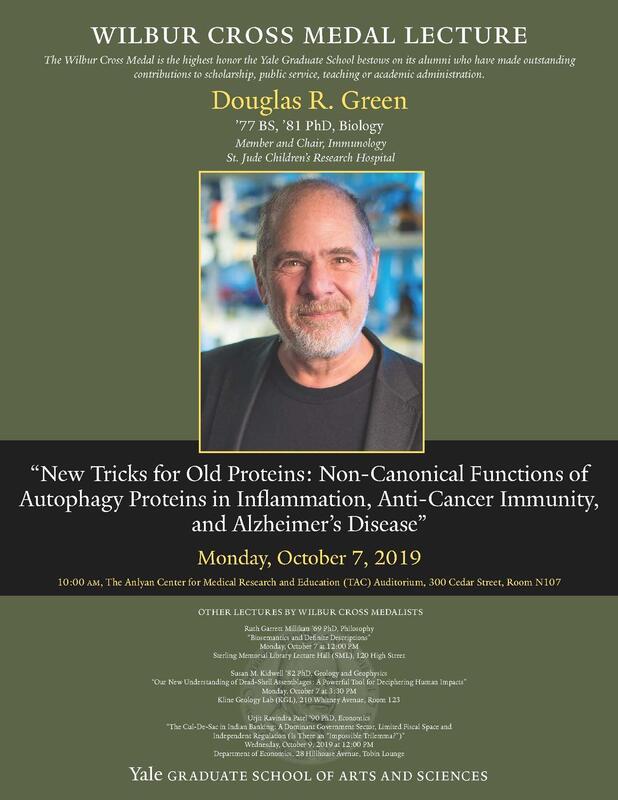 Green holds the Peter C. Doherty Endowed Chair of Immunology at St. Jude Children’s Research Hospital. Prior to this post, he was head of the Division of Cellular Immunology at the La Jolla Institute for Allergy and Immunology. Green completed his B.S. degree at Yale in 1977 and his Ph.D. in immunology in 1981, followed by postdoctoral work in experimental surgery and marine ecology, also at Yale. His research has focused on the process of active cell death and cell survival, extending from the role of cell death in the regulation of cancer and immune responses in the whole organism to the fundamental molecular events directing the death of the cell. More recently, Green discovered the process of LC3-associated phagocytosis, which links the autophagy pathway to phagosome maturation. Other areas of his interest include regulated necrosis and metabolic reprogramming during asymmetric division in T lymphocytes. He has published over 600 papers, chapters, commentaries, and books, and is an ISI highly cited researcher. In 2017, Green was awarded the Jurg Tschopp Prize for research on cell death. He is an honorary fellow of Trinity College in Dublin, an honorary Einstein Professor in China, a foreign fellow of the Royal Society of Canada, and an honorary Ph.D. degree recipient from University Tor Vergata in Rome. His most recent book, “Apoptosis and Other Cell Death Mechanisms: Means to an End,” was published in 2018. 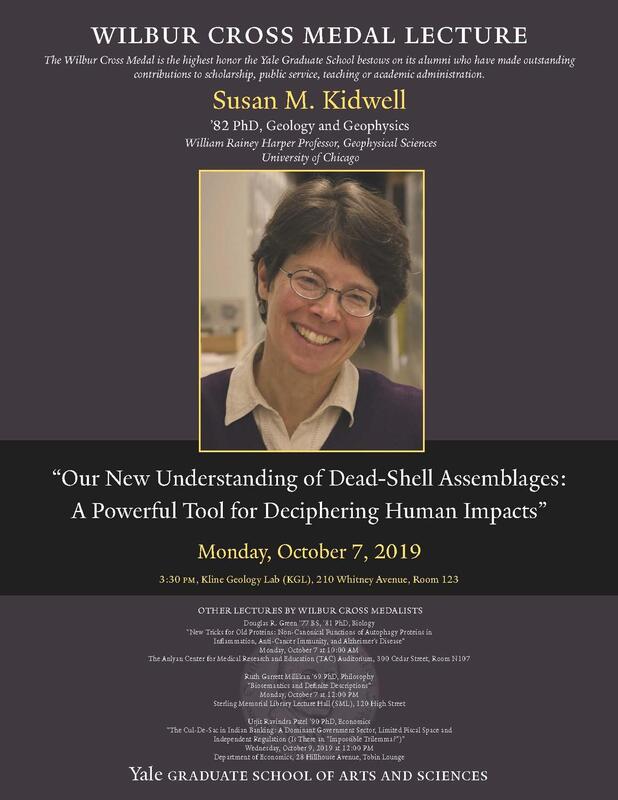 Kidwell, a sedimentary geologist and paleoecologist, is the William Rainey Harper Professor in Geophysical Sciences and the Committee on Evolutionary Biology at the University of Chicago. She earned her Ph.D. from Yale in geology and geophysics in 1982. Kidwell has combined geological fieldwork, laboratory experiments, measurements in modern environments, statistical meta-analysis, and modeling to investigate how the fossil record forms and how best to use it to understand the past and anticipate the future of today’s biodiversity. Her work is essential to evaluating anthropogenic impacts, developing targets for remediation, and solving complex modern-day environmental problems, but it also pushes towards a rigorous understanding of the fossil record. The author of numerous scientific papers, Kidwell is a fellow of the American Academy of Arts and Sciences and the American Association for the Advancement of Science. She has received many awards, including the 2015 Mary Clark Thompson Medal from the US National Academy Sciences. 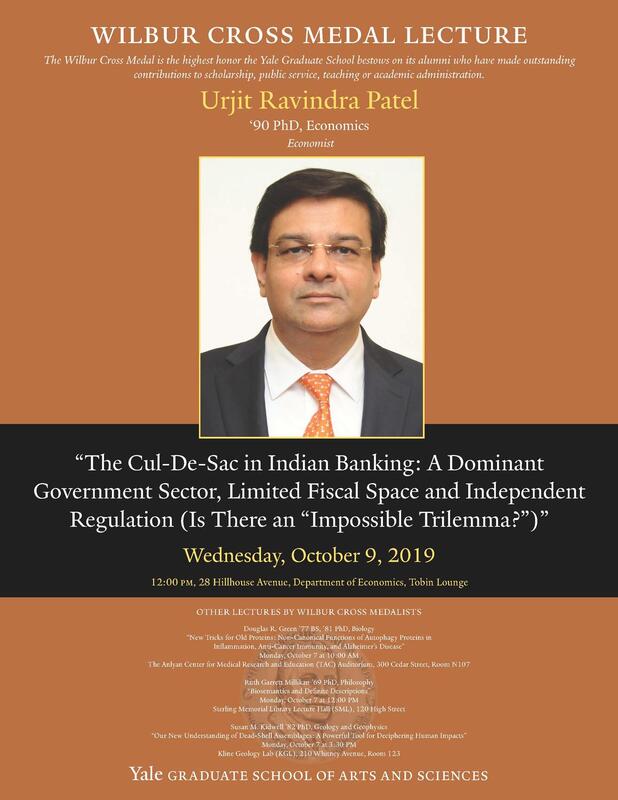 Patel earned a Ph.D. in economics from Yale in 1990. He served as governor of the Reserve Bank of India (RBI) from September 2016 to December 2018. During that period, he was a member of the board of directors at the Bank for International Settlements, and served on the advisory board of the Financial Stability Institute. He was a deputy governor in charge of monetary policy, economic research, and financial markets operations at the RBI. From 2009 to 2012 he was a nonresident senior fellow at The Brookings Institution in Washington, D.C. Patel was also chair of the Expert Committee to Revise and Strengthen the Monetary Policy Framework, a member of the Committee to Comprehensively Review the Fiscal Responsibility and Budget Management Roadmap, and a member of the Task Force on Direct Taxes. Patel has authored (singly and jointly) about 40 scholarly publications and papers, and given lectures by invitation, in the areas of public finance, monetary policy, the Indian financial sector, theory of international trade, the economics of climate change, regulatory economics, and the global financial safety net. In 2019, he was elected an honorary fellow of Linacre College at Oxford.