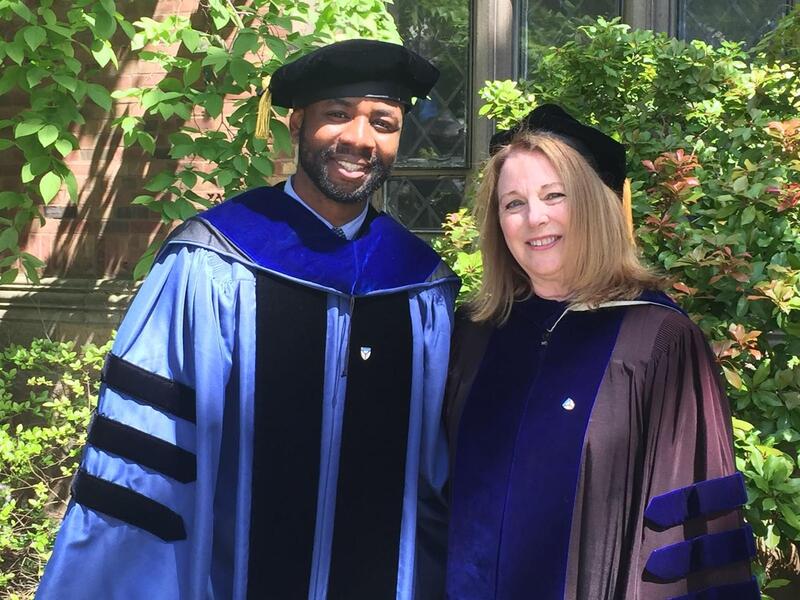 As the first African-Canadian male and the first Ghanaian-born scholar, as well as one of the first Africans overall, to earn a doctorate from the Yale Department of History, Wendell Nii Laryea Adjetey (Ph.D. ’18) has special insight into the importance of the study of history in the current political climate.

“History, and the craft of history is fundamental to our pluralistic, liberal, democratic project,” Adjetey said. “Partly because critical history allows us to understand human nature: it helps us understand fault lines in our society. It’s also a primer to the pitfalls that we can anticipate. Whether we’re cultivating this craft in the academy or applying its lessons in civil society, it’s fundamental to some of the challenges we face in this post-truth era.”

Born and raised in Accra, Ghana, Adjetey immigrated to Canada as a child, where he was the first in his family to attend and graduate from high school. Even before college, he expressed an interest in history, encountering the work of Yale historians in his senior year of high school.

Adjetey’s dissertation, which won the Sylvia Ardyn Boone Prize for African American history, the Edwin W. Small Prize for “outstanding” contribution to U.S. history, and the Canadian Studies Prize, examines the crossborder migration of diasporic Africans in Great Lake cities in the United States and Canada, and how this movement forged a new continental identity of African North Americans. He is expanding his dissertation into a monograph on notions of pan-Africanism in North America and ideas of racial solidarity across Canada, the United States, and the Caribbean titled Cross-Border Cosmopolitans: The Making of a Pan-African North America, 1919-1992. In addition to the prizes for his dissertation, Adjetey won the Willard “Woody” Brittain, Jr. ’70 Leadership Award.

He also cites the importance of teaching to his work as a historian.

“Teaching at Yale is a far more intimate experience than I expected,” Adjetey said. “I found that grading and providing feedback on assignments allowed me to gain a better appreciation of common challenges with writing.”

“Adjetey’s work fills a gap in Canadian historiography about the black experience from the early twentieth century onward, and his diasporic orientation creates a new way of looking at transnational racial formation,” said Glenda Gilmore, the Peter V. and C. Vann Woodward Professor of History and Adjetey’s advisor. “It contributes to U.S. history by theorizing the black experience with race and migration as transnational experience that bears on U.S. labor markets and civil rights activism. He deeply understands the immigrant experience and feels an enduring responsibility to contribute to social justice in North America and Africa. His open-hearted commitment to his fellow human beings guides his scholarship and his daily life. Yale is a far better place because of the time he spent here.”

Adjetey sees the importance of history in a real-world context. He is President and Co-Founder (along with another Yale graduate, Etienne Mashuli) of the Tujenge Africa Foundation, an organization devoted to development initiatives in Burundi focused on “education, dialogue, and economic advancement…while maintaining a long-term vision of providing the same opportunities in the Democratic Republic of the Congo, Rwanda, Uganda, Tanzania, as well as in other conflict-ridden nations in Africa.”

“History is vital to the peace and nation building work that we do,” Adjetey said. “The past informs governance and stability. Studying history allows for critical, candid, and courageous conversations about reconciliation in the present.”

Adjetey also took an active role in community-building at Yale. He was Head Graduate Affiliate at Davenport College, overseeing a cohort of graduate and professional student mentors, as well as Graduate Affiliate for the Yale World Fellows Program. He also served as a Graduate Fellow for the Office for Graduate Student Development and Diversity, supporting efforts to recruit and retain graduate students from under-represented groups.

This year, Adjetey is the William Lyon Mackenzie King Postdoctoral Fellow at Harvard University’s Weatherhead Center for International Affairs. He is also a lecturer in the History Department at Harvard, teaching a course this semester titled “’Binding Ties’: African North Americans and Citizenship, 1775 to the Present.” Next year, he will begin a position as Assistant Professor at Providence College.