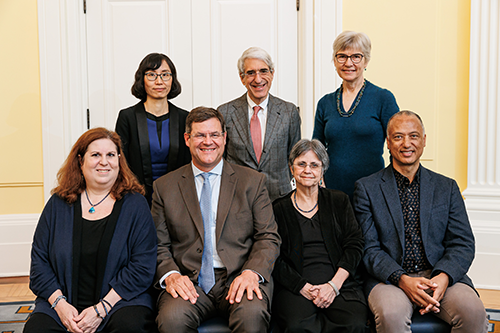 Four alumni of the Yale Graduate School of Arts and Sciences will receive 2022 Wilbur Lucius Cross Medals in honor of their outstanding work and service.

The Cross Medal is given in honor the continued legacy of service and excellence inaugurated by Wilbur Lucius Cross (Ph.D. 1889), who served as dean of the Graduate School from 1916 to 1930, and later as governor of Connecticut from 1930 to 1939.

Dominguez received her Ph.D. in anthropology from Yale in 1979. Alumna of the first co-ed undergraduate class of Yale, she has gone to write about race, social classification, identity, law, epistemology, as well as global and transnational processes. She cites Sidney Mintz, former professor at Yale, as a source of intellectual development during her time as an undergraduate student. Dominguez has a long history of participating in field work, from New Orleans, Louisiana, to Jerusalem to Berlin, Germany; she has also been a prolific writer, having contributed to and edited multiple books, as well as having published her own. Among these books are White By Definition (Rutgers University Press, 1993), People as Subject, People as Object: Selfhood and Peoplehood in Contemporary Israel (University of Wisconsin Press, 1989), and From Beijing to Port Morseby: The Politics of National identity in Cultural Policies (Taylor & Francis, 1998), which she edited alongside scholar David Wu. Further, she is a multi-grant recipient (including grants from the likes of Fulbright, the Rockefeller Foundation, and the U.S. Department of Education), as well as co-founder for the International Forum for U.S. Studies. Dominguez currently teaches at the University of Illinois at Urbana-Champaign.

Ewell received a Ph.D. in Music Theory from Yale in 2001, where he studied under theorist Allen Forte. Currently a professor of music theory at Hunter College of the City University of New York (CUNY), his research interests and specialties involve race studies in music theory, Russian opera and music theory, twentieth-century music theory, as well as hip-hop and popular music. His work has found a broad audience and as such, has been featured across YouTube, BBC, the New York Times, podcasts, and other popular news sources. Additionally, Ewell’s writing has appeared in online blogs, edited volumes, encyclopedias, conferences, and peer-reviewed journals; his monograph On Music Theory, and Making Music More Welcoming For Everyone will be published via the University of Michigan Press in the Spring of 2023. Ewell is in the process of co-authoring a “modernized and inclusive textbook” concerning contemporary music theory pedagogy, set to also be published in 2023. Since 2013, Ewell has been the recipient of several honors and awards, such as the Leonard J. Reade Distinguished Lecture in Music and Racial Justice at Dartmouth College (2022) and the Presidential award for Excellence in Creative Work from Hunter College (2019-20).

Johnson received a Ph.D. in geology and paleobotany from Yale, where, while studying, he discovered an extinct species of linden leaf, which would go on to be named in his honor (Tillia johnsoni). Since graduating in 1989, he has gone on to become an acclaimed scientist and paleontologist. After serving as lead scientist, curator, and researcher at the Denver Museum of Nature and Science for over 20 years, in 2012 he transitioned roles to become the Sant Director of the Smithsonian National Museum of Natural History, where Johnson currently oversees the world’s largest natural history collection. He has led expeditions across the United States and globe, and his research interests lie in fossil plants and the extinction of dinosaurs. In 2011, Johnson led an ice age excavation near Snowmass Village in Colorado where remains in excess of fifty mastodon skeletons were discovered. He is the host of the PBS Nova series “Making North America,” the special Polar Extremes, and the series The Great Yellowstone Thaw. Johnson is also a published author, most recently having published the educational, fun, and well-received book Cruisin’ the Fossil Coastline: The Travels of an Artist and a Scientist Along the Shores of the Prehistoric Pacific (Chicago Review Press-Fulcrum, 2018), with co-author Ray Troll.

Tishkoff graduated with a Ph.D. in Genetics from Yale in 1996, where, under advisement of Kenneth Kidd, developed an interest in African genomics and evolution. She would go on to be published and do groundbreaking work in the field to demonstrate the diversity among African populations. Tishkoff became the David and Lyn Silfen University Professor at the University of Pennsylvania in 2012, where she also holds appointments in the Department of Biology and the Department of Genetics. Additionally, she serves as the Director of the Penn Center for Global Genomics and Health Equity. Her research specialties are in evolutionary genomics, African phenotypic and genetic diversity, and genetic basis regarding resistance to infectious diseases and human adaptations. Alongside her students, she uses a multi-methodological approach in her work, utilizing field work, computational approaches, and laboratory research. As testament to her influence in the field, Tishkoff is the recipient of several awards, including the NIH Pioneer Award and the Burroughs/Welcome Fund Career Award.  She is a member of many professional organizations, associate editor of journals like Cell and PLOS Genetics, the first author on many publications and co-author of several books regarding population genetics, biology, and evolution.