In 3MT Contest, Doctoral Students Teach and Triumph in 180 Seconds 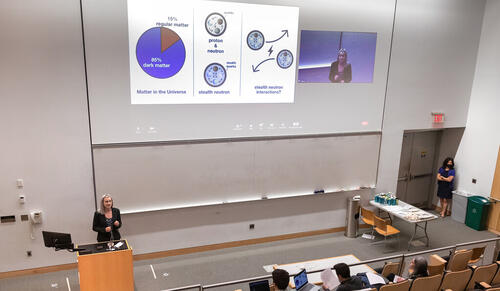 Reprinted from YaleNews
By Susan Gonzalez

“Think about the last time you got a paper cut,” Yale graduate student Olivia Justynski told her audience during a Loria Hall presentation that was also livestreamed on Zoom. “How long did it take to repair?”

As audience members reflected on their own experiences of the minor but painful wound, Justynski, a sixth-year doctoral student in molecular, cellular, and developmental biology, described her research on the various cells in the body that contribute to healing, especially a receptor called AXL that is involved in the body’s inflammatory response to a wound. She spoke confidently, her pace even, and used simple, non-technical language throughout an engaging presentation on the topic “New Discoveries in Wound Healing.”

Justynski had exactly three minutes to make her scientific research clear and relevant to an audience of more than 200, many of whom had little scientific background. But she had practiced her presentation for the Graduate School of Arts and Sciences’ (GSAS) 3-Minute Thesis Competition (3MT) many times over, and the contest’s judges had actually already chosen the winners of the competition days before based on video recordings of presentations that Justynski and the 10 other finalists had submitted at the end of March.

At the April 14 Loria Hall event, the finalists delivered their presentations live and in person, but they did not yet know the judges’ decisions. Still, how well they presented at the event mattered, as members of the audience, which included many Yale alumni, were invited to select winners for two People’s Choice Awards: one for best presentation in the humanities/social sciences and one for the best in STEM.

Aritra Ghosh, People’s Choice award winner in STEM; 1st-place winner Kimmy Cushman, Dean Lynn Cooley, 1st-place winner Diondra Dilworth, and Demar Lewis, People’s Choice winner in the Humanities/Social Sciences.
The 3MT competition was first introduced at Yale in 2017 and follows the model of the University of Queensland, which founded the now popular event as a way to help doctoral students develop their academic and research communication skills. Participants are allotted just three minutes to present a summary of their often-technical doctoral research to a general audience using exactly one PowerPoint slide as an illustration. The competition is now hosted by hundreds of universities internationally.

“3MT hones our students’ public speaking skills so they can fluently convey their research to decision-makers, the public, and potential employers,” said GSAS Dean Lynn Cooley. “It’s vitally important for us to connect with the lay public so it understands the scope, impact, and excitement of university research. Everyone participating has the added benefit of hearing about the most up-to-date research happening all over Yale.”

This year, 16 graduate students submitted their video presentations in early March. A panel of judges that included staff members and administrators from across the campus winnowed the group down after the first round, with each giving feedback on how the students could improve their individual presentations. Cooley and three other judges — all GSAS alumni — were then assigned the task of choosing the 1st-, 2nd-, and 3rd-place winners based on the finalists’ final-round videos. The winners were announced at the end of the April 14 event.

Competition winners are selected based on the clarity and content of their presentation, as well as their ability to engage listeners, said Hyun Ja Shin Ph.D. ’94, director of graduate and postdoctoral career services in the Office of Career Strategy.

“This exercise is ultimately designed to challenge students who are doing these very deep dives in their disciplines to be able to speak about their work without technical jargon,” Shin said. “They have to explain highly complex material in a way that a general audience can understand, as well as speak about the impact of their work – how it contributes to their discipline, to society, or to humanity.”

Typically, three finalists are chosen in each of four divisions: Humanities, Social Sciences, Physical Sciences, and Biological Sciences. Their research topics ranged from water quality and endocrine disruptor exposure in a Qom community to reimagining community safety in the United States to titi monkeys’ infant care, and what we might learn about human parenting from their example.

Many of the finalists began preparing for the competition at the start of the spring semester by taking part in a variety of workshops and programs offered jointly by the Office of Career Strategy and the Graduate Writing Lab (GWL) in the Poorvu Center for Teaching and Learning. These included workshops on the theme “Presenting Engagingly”; tutorials on the video platform Panopto; acquainting themselves with the PitchVantage Public Speaking Studio, a program that evaluates speaking performance in real-time; and having one-on-one consultations with Shin and Jacob Gonzalez Ph.D. ’14, senior associate director of graduate and postdoctoral career services in the Office of Career Strategy, as well as with GWL directors and graduate student peers who serve as fellows in the lab.

The 3MT participants who registered at the beginning of the competition in the Poorvu Center Public Communication Program and who met concrete benchmarks were awarded a certificate from The Poorvu Center in recognition of their commitment to developing their public-speaking skills.

“The 3MT competition is not a required program for our doctoral students,” said Julia Istomina, associate director of the Graduate Writing Lab, who developed the certificate program and also advised competition participants. “But those who take part put a lot of time and effort into producing these speeches and slides, and we wanted to recognize the skill sets that they develop as they utilize these resources. The skills they do develop translate so well in the academic job market or in any kind of work they might pursue beyond Yale.”

Aritra Ghosh, a fifth-year doctoral student in astronomy, said that earning the Certificate for Public Communication was one of the draws for him to take part in 3MT. “The workshops with Julia in the Graduate Writing Lab and with Jacob Gonzalez taught me to think about my presentation in a very structured way, first in getting the audience’s attention and then looking at my work more broadly and trying to explain it,” said Ghosh.

While Ghosh has enjoyed giving presentations about astronomy at Yale’s Leitner Family Observatory and Planetarium, he has sometimes found it challenging to answer succinctly a common question from visitors: “What’s your research about?” Over the course of about a month, he created about seven iterations of his presentation, titled “Black Holes: Ruthless Destroyers or Formative Gravitational Beasts?”

“It’s a completely different world to record yourself,” Ghosh said. “I took part in a session with the Yale Broadcast Studio, where I got simple tips about things like what shirt to wear so as not to distract attention from the presentation, what the background should look like, and how to turn gently toward my slide to guide the audience’s attention towards it.”

Chihiro Larissa Tsukamoto, a fifth-year student in medieval studies, summed up their doctoral work in a presentation titled “Apollo’s Gift: Music as Healing from Ancient Greece to Mamluk Egypt,” which explored the earliest incarnations of music therapy.

“When selecting a topic for my thesis, it was important to me that it have actual, real-world applications,” said Tsukamoto. “Music therapy is pretty popular right now in palliative care and for patients with dementia or Alzheimer’s disease, as well as with people who have speech and communication disorders.” A pianist, harpist, and percussionist, Tsukamoto has volunteered to play at the bedsides of ill or dying patients in hospitals.

Tsukamoto also earned the Poorvu Center Public Communication Certificate, and said they actually relish public speaking. Nevertheless, they found it challenging to compress their research into a three-minute presentation.

While David Flesher, a second-year student in molecular biophysics and biochemistry, has some time before he begins writing his doctoral thesis, he decided to take part in the 3MT competition because he wanted to present his research on photosynthesis in a way that is “short and sweet.” He, too, found it difficult to reduce the first iteration of his presentation down from 3 minutes and 15 seconds. After achieving that, he took to heart the feedback he received from judges in the first round about toning down some of his body movements during his talk.

“I don’t like public speaking,” admits Flesher. He was nervous about whether he could memorize his presentation, titled “Structural Studies on Far-Red Light Photosystems.” When he saw the list of fellow finalists, he also wondered if he had made a mistake in taking part: they were all further along in their graduate study.

“I thought, ‘oh man, maybe this event isn’t for me, but for more senior students,’” he said. “But then I figured, what’s the worst that could happen? It would still be a worthwhile experience.”

And now for the winners…Along with Cooley, the judges for this year’s 3MT were Jenny Rooke ’98 Ph.D., managing director of Genoa Ventures and adviser to the Bill & Melinda Gates Foundation; Max Golts ’99 Ph.D., chief investment officer for 4X4invest; and Andrea Levitt ’78 Ph.D., professor emerita of French and linguistics at Wellesley College.

For the first time ever in Yale’s competition, the judges were unable to choose just one first-place winner. They instead presented first-place honors — which comes with a $1,000 cash award — to Diondra Dilworth, a fourth-year student in chemistry, for her presentation “The Ribosome: Modifiable Machine — A Chemist’s Approach,” and Kimmy Cushman, a fifth-year student in physics, for her research summary on “Dark Matter: The Mysteries of Mass.”

“This is such an incredible honor,” said Dilworth, adding that she shares the award with her mom, who “heard me practice a million times.”

Cushman also thanked her family, her Yale advisers and mentors, and the other competitors, noting: “All the talks were so good.”

Since there are two first-place winners, a second-place award was not granted. The third-place winner is Carson Koepke, a fifth-year student in medieval studies, for his presentation on “Centering Saints’ Lives in Medieval Studies.”

The audience picks for the People’s Choice Awards were Ghosh, for his presentation in STEM, and Demar Lewis, a fifth-year student in sociology and African American studies, for “‘Walk It Like We Talk It’: Reimagining Community Safety in the United States” in the humanities/social sciences category.

Two of last year’s 3MT winners, Matthew Ellis and Malena Rice, say their achievement has afforded them some wonderful opportunities. Ellis, a Ph.D. student in the Department of Cellular and Molecular Physiology, took top honors in the 2021 Ivy+ Three-Minute Thesis Competition for his presentation “Using Stem Cells to Model and Treat Cardiovascular Disease.” This month, he competes in the Northeastern Association for Graduate Schools’ 3MT.

“I think the COVID-19 pandemic has really demonstrated a rampant distrust of science and a rise in so much misinformation, making it even more important that we communicate science in a way that is approachable and accessible to everybody,” said Ellis.

For their expertise in making their work accessible to a broad audience, Ellis and Rice, a graduating Ph.D. student in astronomy who was recently named a 51 Pegasi b Fellow and the 2021 3MT second-place and Best in STEM winner, were later invited to meet with leaders in industry at the Chemical Marketing & Economics Inc. STEM Leadership Awards Luncheon. Rice, along with Ghosh and Cushman, are invited speakers at Yale’s Inaugural Symposium on Increasing Human Potential: Space Exploration. The event, which will also feature NASA scientists, takes place on April 25.

“There is no losing in the 3MT because everyone becomes a better public speaker and everyone has that elevator pitch by the end,” said Rice. “Everyone is really a winner in this competition. No matter what, you’re going to gain something incredible from this experience.”

View videos of all of the finalists’ 3-Minute Thesis presentations.