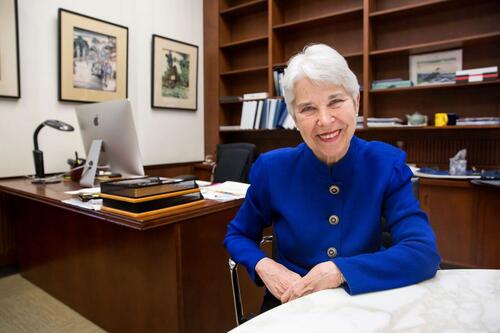 Carol T. Christ (PhD 1970, English), former president of Smith College and a recipient of the Graduate School’s Wilbur Cross Medal, will become chancellor of the University of California, Berkeley, on July 1. She is the first woman to hold that position.

A Victorian literature scholar, Christ joined the UC Berkeley faculty in 1970 and became chair of the English department in 1985. Three years later she was appointed dean of humanities, and in 1989 she became provost and dean of the College of Letters and Science.

In 2002, she left California to became the tenth president of Smith College, where she led a wide-ranging strategic planning process that positioned the college for continued academic excellence and financial stability.

Christ retired from Smith in June of 2013, and in January of 2015 she went back to UC Berkeley as director of the Center for Studies in Higher Education. In May of the following year she took up her former role as executive vice chancellor and provost.

Throughout most of her administrative career, Christ has continued to teach and pursue her academic research. She has published two books: The Finer Optic: The Aesthetic of Particularity in Victorian Poetry and Victorian and Modern Poetics. She also edited a Norton Critical Edition of George Eliot’s The Mill on the Floss and co-edited the Norton Anthology of English Literature and Victorian Literature and The Victorian Visual Imagination.

Christ is a member of the American Academy of Arts and Sciences and the American Philosophical Society. The Graduate School awarded her its highest honor, the Wilbur Lucius Cross Medal, in 2007.