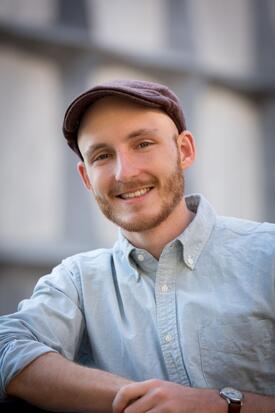 Andrew S. Brown (English) was in very distinguished company when he spoke at a symposium celebrating Yale’s acquisition of a major scholarly treasure: the Anthony Taussig Collection of English Legal Manuscripts and Printed Books. In fact, he was the only graduate student on the program, which included a dean, several holders of endowed professorships, and the collector himself, who is a retired British barrister.

Back last January, Kathryn James, curator of the Early Modern and Osborn Collections at the Beinecke Rare Book and Manuscript Library, invited Andrew to become the curatorial assistant for the Taussig Collection during preparations for the October 3 symposium. She knew of his interest in, and knowledge of, the history of printed books.

“My role as curatorial assistant fits closely with my developing research interests as a student in the English department, where I study early modern drama with a focus on the material forms in which plays circulated among their first audiences and readers in 16th century England,” he says. “Often this means paying close attention to aspects of published playbooks that many of us might today consider less important than the text itself, such as dedications to noble patrons, letters to the reader, or even the type of font and other design elements used in printing — all skills that require the same careful archival work engaged in by curators at the Beinecke and elsewhere.” His dissertation advisor is David Scott Kastan, “whose research on the history of early modern books has helped shape and refine my own approach,” Andrew says.

The Taussig materials, which span the 13th through the 19th centuries, form “a stunning collection for research into English intellectual and social history, in a period when England was transformed from a remote European province into the world’s leading imperial power,” James says. “It is the most extensive private collection ever assembled for the study of the cultural and intellectual history of law in England.” 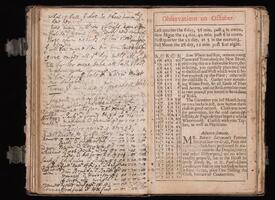 The collection includes hand-written legal manuscripts housed in the Beinecke as well as rare printed books which have been added to the Lillian Goldman Law Library. Among the gems are a pocket-sized, hand-written copy of the Magna Carta from the 14th century; an early manuscript copy of the first summary of English law written in Norman French; and correspondence by and about William Blackstone, the 18th-century English jurist and politician who wrote the single most influential book in the history of Anglo-American common law, Commentaries on the Laws of England. WorldCat, the global database of library catalogs, shows that nineteen of the Taussig books are the only copies in North American libraries, and nine of these are the only copies in any WorldCat library.

Many of the works in the Taussig Collection “have never been studied by scholars or historians in any sustained way, so a significant goal was to begin thinking about how to bring them to a wider audience of students and faculty at Yale and beyond,” Andrew notes. “The existing catalogs created by Taussig and Sir John H. Baker, as well as the information provided by the Yale librarians, were invaluable guides, but the information they provided was often relatively basic. Only by taking the time to thoroughly examine these documents and books, page by page, was it possible to achieve a fuller sense of their contents and how they might fit into a larger exhibition or scholarly study.” 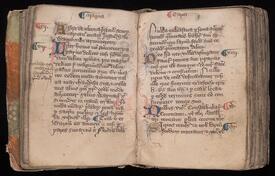 His careful review has revealed that the Taussig materials will be “an incredibly rich resource for legal historians, illustrating how the training and professional practice of lawyers have been transformed from the Middle Ages to the present day. But the collection also holds interest for scholars in a wide range of other fields, including social history and literary studies, by bringing together historically significant texts such as the Magna Carta with unique and often deeply personal sources that reveal the evolving education of law students, the everyday work of justices of the peace in settling disputes, and the frequently violent clashes between police, criminals, and lawyers in London’s bustling streets.”

Andrew’s curatorial work goes beyond the content of the documents and books. “Especially when working with manuscripts, one of the most important tasks is to consider the text not just as a source of information, but also as a unique material object. Examining the binding of a document, the quality and origin of its paper, the style(s) of its handwriting, and any annotations or other evidence of its use can allow you to tell detailed and often surprising stories that would be invisible when considering content alone.”

In conjunction with his research on the Taussig Collection, Andrew was responsible for putting together a display of some of its highlights. The exhibition, titled “Uncommon Law,” is on view in the Beinecke now through December 15. He chose which items would be included and how they would be displayed, and also wrote the text for the descriptive labels and press materials. “Uncommon Law” is part of a larger exhibition, “Reading English,” that celebrates the Beinecke’s Osborn Collection, and which was curated by James.

At the Law School symposium on October 3, Andrew’s talk took a close look at several items from the collection and traced some of the stories that such documents might allow scholars to tell about the history of English law and its global influence.

In addition to Andrew, the speakers were Robert C. Post, dean of Yale Law School; Sir John H. Baker, a professor emeritus from the University of Cambridge; Anders Winroth, the Forst Family Professor of History at Yale; John Langbein, the Sterling Professor of Law and Legal History at Yale Law School; and the collector, Anthony Taussig. Taussig is a member of Gray’s Inn, Lincoln’s Inn, and the Council of the Selden Society.

Andrew also spoke at the opening of “Uncommon Law.”

A native of Hamilton, Ontario, he attended York University in Toronto, where he majored in English and history before completing an MA in English literature at McGill University. He first became interested in the early modern book and legal history through his master’s degree research, which focused in part on the connections between theatrical spectatorship and common law trials in the period.