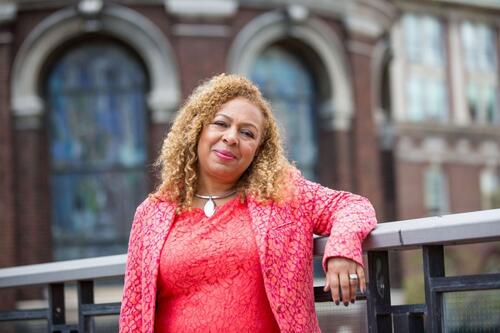 Kellie Jones (PhD 1999, History of Art) has been awarded a 2016 MacArthur Fellowship, commonly known as a “genius grant.” Jones is an associate professor in the Department of Art History and Archaeology and the Institute for Research in African American Studies at Columbia University. From 1999 to 2006, she was on the faculty at Yale.

Her research interests span African American and African Diaspora artists, Latino/a and Latin American artists, and issues in contemporary art and museum theory. Both as an art historian and as a curator, she is known for “deepening our understanding of contemporary art of the African Diaspora and securing its place in the canons of modern and contemporary art,” according to the MacArthur announcement. “Her research and curatorial practice, which span large-scale museum exhibitions with extensive catalogues as well as scholarly books and articles, have been instrumental in introducing the work of now seminal black artists (such as Martin Puryear, David Hammons, and Lorna Simpson) to wide audiences and bringing to light long-forgotten or overlooked black artists…. Through an array of critical interventions, Jones is writing the history of African American art and redefining the contours of American art history in general.”

At Yale, Jones wrote a dissertation titled “FLYING AND TOUCHING DOWN:  Abstraction, Metaphor, and Social Concern, The Use of Conceptual Forms Among Mexican and African American Artists, 1968-1983.”  In it, she presents a cross-cultural discussion of how artists used neo-avant-garde schemas and incorporated social and political concerns into their work.

As a graduate student, she was deeply influenced by “wonderful professors like Hazel Carby and Paul Gilroy and my fabulous dissertation adviser Robert Farris Thompson, to whom I owe so much.” Sylvia Boone, “who focused on beauty in the African Diaspora,” and “the many amazing members of my cohort” helped enhance her years at Yale.
Off campus, Jones was fond of the now-closed restaurant, Café Adulis, and the Ghebreyesus brothers who owned it. They “created a welcoming environment with delicious Eritrean food,” she fondly recalls.

After earning her PhD, Jones joined the Yale faculty. “Many of the courses that are now so popular with my students at Columbia I started at Yale, such as ‘Issues in Performance Art.’ I loved having MFA students in classes regularly.”

Jones is author of several groundbreaking books, exhibition catalogues, and articles. Her current project, South of Pico: African American Artists in Los Angeles in the 1960s and 1970s, will be published in 2017. Energy/Experimentation: Black Artists and Abstraction, 1964–1980 (The Studio Museum in Harlem, 2006), published in conjunction with an exhibition of the same name, highlighted abstract artists and provoked a rethinking of African American art of the period. Now Dig This! Art and Black Los Angeles, 1960–1980 (Prestel Delmonico, 2011) introduced previously unknown Los Angeles–based black artists and presented their work in the context of the West Coast art scene, both as an exhibition and in print. Witness: Art and Civil Rights in the Sixties (The Monacelli Press, 2014) analyzed the role of art in the civil rights movement. The book and exhibition were mounted in celebration of the fiftieth anniversary of the Civil Rights Act. EyeMinded: Living and Writing Contemporary Art (Duke University Press 2011) was named one of the top art books of 2011 by Publishers Weekly.

Over the course of three decades, Jones has curated major national and international exhibitions. She organized shows for the Johannesburg Biennale (1997) and São Paulo Bienal (1989), the latter of which, featuring the work of Martin Puryear, won the grand prize for best individual exhibition. Her exhibition, “Now Dig This! Art and Black Los Angeles, 1960-1980,” at the Hammer Museum in Los Angeles was named one of the best exhibitions of 2011 and 2012 by Artforum and the best thematic show, nationally, by the International Association of Art Critics (AICA).

In addition to winning the MacArthur Fellowship, Jones was the inaugural recipient of the David C. Driskell Award in African American Art and Art History from the High Museum of Art in Atlanta and won a Creative Capital | Warhol Foundation Arts Writers Grant.

MacArthur Fellowships are awarded annually by the John D. and Catherine T. MacArthur Foundation to about twenty-five Americans who have shown “extraordinary originality and dedication in their creative pursuits and a marked capacity for self-direction.” The current prize is $625,000 paid over five years.