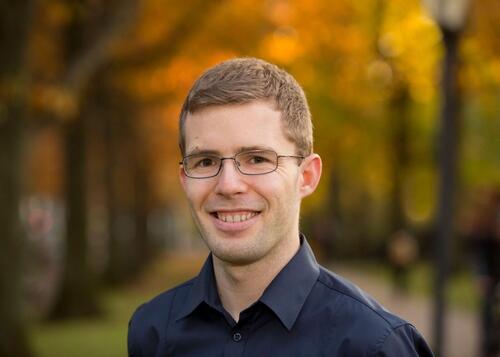 Johannes Ulf Lange (Astronomy) has been awarded a Kavli Institute for Theoretical Physics (KITP) Graduate Fellowship. He is only the second winner from Yale to be chosen for this honor since the launch of these fellowships in 1999.

KITP is based at the University of California, Santa Barbara. Each year, a small group of graduate fellows are invited to join workshops and attend talks and conferences on topics at the forefront of theoretical science. Lange will be at the Institute from January to June.

One workshop he looks forward to is closely related to his dissertation research on the galaxy-halo connection.

“Astronomers know that galaxies form inside dark matter halos,” Lange says. “Exploring the connection between galaxies and these halos is extremely important to our understanding of how galaxies form and evolve. It is well established that the properties of galaxies are strongly correlated with the total mass of the dark matter halo that they live in. However, what other dark matter halo properties are correlated with galaxy properties is not yet clear. I will use galaxy surveys to look, for example, at the deflection of light due to general relativity, the motions of galaxies, or how galaxies are distributed. The scale of galaxies is simply mind-boggling, and there are so many things about them that we still don't understand.” His dissertation adviser is Associate Professor Frank van den Bosch.

Lange has a broad interest in physics, too, and says that at KITP, he will “have the opportunity to attend a variety of talks and conferences, not just in astronomy. For example, while I am in Santa Barbara, there will be conferences on particle physics and the physics of hearing.”

Lange was born and brought up in Berlin, Germany, and earned his bachelor's degree from the Free University of Berlin. The university was established in West Germany during the Cold War and its historically strong ties to America enabled him to participate in an exchange program at UC Santa Barbara as an undergraduate. While working on his master’s degree at the University of Heidelberg, he did a one-year exchange program at the Chinese University of Hong Kong — “a great opportunity to broaden my horizon and establish collaborations with scientists outside of Germany or America.”

He chose Yale for his doctoral studies because he was interested in his current adviser’s work, and because he “liked the astronomy graduate program, with its strong focus on research right from the beginning. Additionally, I had a very good feeling about the Astronomy Department at Yale. All the people are extremely friendly, and we have a great atmosphere and sense of community.”

When not hard at work, Lange likes to play badminton and bike, watch soccer, and play board games with friends. He also finds time for New Haven Reads and Open Labs at Yale. “They are both excellent organizations that always need more volunteers,” he says.