While many Yalies might be familiar with the undergraduate a cappella groups like the Whiffenpoofs, the Yale community offers many opportunities to join a diverse array of musical groups. Two of them can be found at the Yale Institute of Sacred Music. Yale Schola Cantorum and the Yale Camerata are both internationally-renowned chorale ensembles, devoted to a wide range of choral pieces new and old.

Yale Schola Cantorum, founded in 2003 by Simon Carrington, performs a range of sacred music from the Renaissance and later. David Hill, one of the world’s leading conductors, serves as principal conductor for the group. Schola has a special interest in historically informed performances, often bringing rare or unusual arrangements to a wider audience.

“They have a wide repertoire,” said Laurie Ongley, concert production coordinator at the Institute of Sacred Music. “Every choir claims to have a wide repertoire, but it’s absolutely true in Schola’s case. Even when they perform well-known works, they might choose unusual or historical arrangements, such as a chamber version of the Brahms Requiem or Robert Schumann’s revision of Bach’s St. John Passion.”

“Yale Schola Cantorum has provided my colleagues and me numerous opportunities to interpret a wide variety of classical choral repertoire—old and new—in exciting performance spaces, such as Woolsey Hall here in New Haven, Alice Tully Hall in New York City, and the Oslo Cathedral in Oslo, Norway,” said Harrison Hintzsche, a graduate student in Vocal Performance at the Yale School of Music. “I've been able to broaden my love for choral music while also enjoying some unique travel and performance experiences.”

Students from any of Yale’s schools are eligible to audition for Schola Cantorum, which makes the choir a great way to meet new people from around the university. Schola performs internationally most years, and offers a $5,500 yearly stipend to all singers. 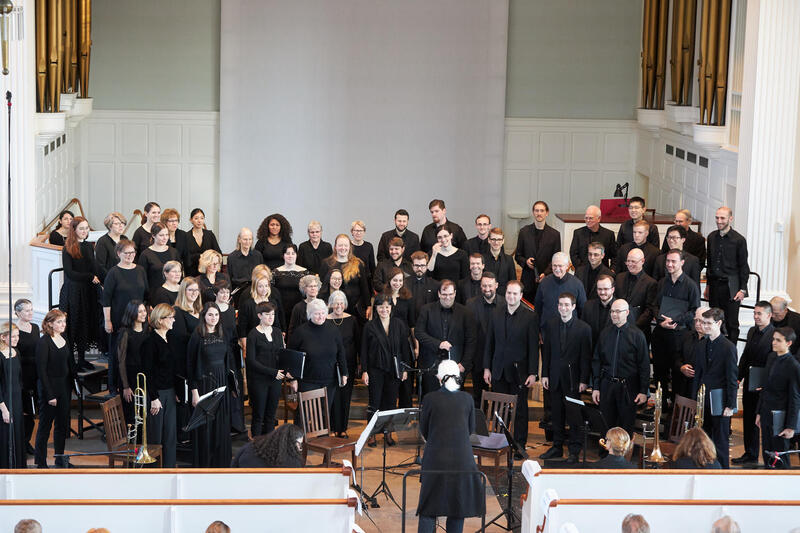 Open to all Yale affiliates and New Haven community members, the Yale Camerata was founded in 1985 by its conductor, Marguerite L. Brooks. The Yale Camerata focuses on recent choral pieces, and has collaborated with a variety of music groups at Yale and in Connecticut. The chamber chorus of the Yale Camerata has also performed internationally, including a residency at Saint Paul’s Cathedral in London, England. As part of the Institute of Sacred Music, the Yale Camerata has commissioned and premiered new pieces, including a major new work by Julia Wolfe, scheduled for April 2020, as part of the 50WomenAtYale150 celebrations and inspired by the hundredth anniversary of women’s suffrage in the United States.

“The various choirs sponsored by the Institute of Sacred Music are a vital part of the music scene at Yale and, more broadly, in New Haven,” said Hannah Goodwillie, a recent graduate of the Institute of Sacred Music’s Choral Conducting program. “I have learned a great deal, in terms of vocal technique, repertoire, and musicianship from singing in these choirs over the past two years.”

Yale Schola Cantorum and the Yale Camerata are holding auditions between Tuesday, August 27th and Saturday, August 31st. For more information, see the Institute of Sacred Music’s website or write to choral.auditions@yale.edu.