Characters struggle to communicate and connect in Ph.D. student’s novel 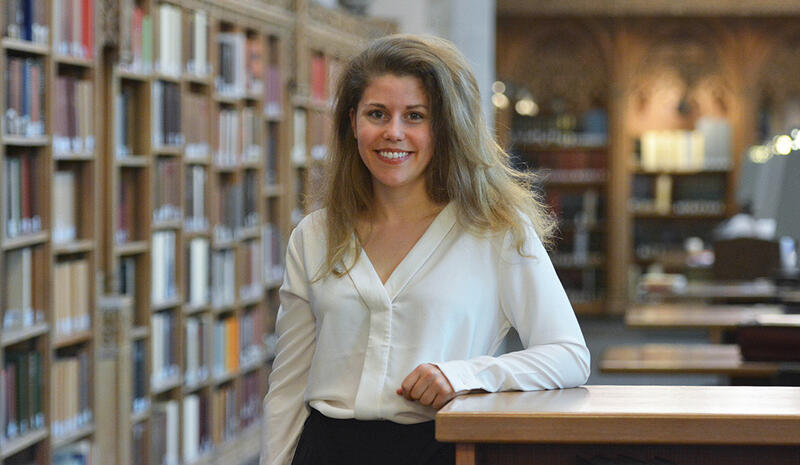 Yale doctoral student Lindsay Stern traces the idea for her new novel “The Study of Animal Languages” to an experience she had involving a lie detector machine.

As an Amherst College undergraduate, Stern had visited the office of a philosophy professor to discuss a paper she was writing. He kept the lie detector on a file cabinet “wryly, to intimidate” his students, recalls Stern. When she walked into the office, the machine was flashing red, indicating a lie was being told, but no one was speaking.

“It was a spring day, the window was open, and [my professor and I] looked at each other and realized that the lie detector was picking up the melody of a bird,” explains Stern, a 2013 Amherst graduate.

The topic of birdsong — and the idea that it might be a coherent “language” — figures prominently in “The Study of Animal Languages,” Stern’s first novel. Vanity Fair listed it among its 13 “Books We’re Looking Forward To in 2019,” putting the Yale graduate student in the company of Margaret Atwood, Colson Whitehead, and Toni Morrison, among other noted authors. 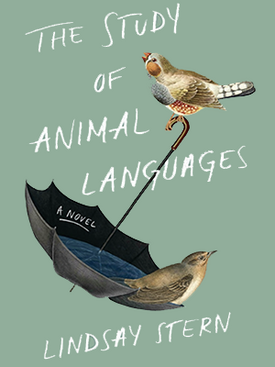 “The Study of Animal Languages” tells the story of married couple Ivan and Prue, who teach at an unnamed Rhode Island college. Ivan is a recently tenured philosophy professor, and Prue is a rising star in the emerging field of biolinguistics. Prue’s lecture on translating birdsong — and a visit by her bipolar (and un-medicated) father to attend it — help to spark a marital crisis for the couple, who already had been failing miserably at communicating with one another.

The book’s publisher, Viking-Penguin, describes it as a “dazzlingly insightful and entertaining novel about the limitations of language, the fragility of love, and the ways we misunderstand each other and ourselves.”

Stern, a second-year doctoral candidate in comparative literature at Yale, began writing the novel while traveling in Africa and Asia on a Thomas J. Watson Fellowship, and refined it while earning her M.F.A. at the Iowa Writer’s Workshop. She is also the author of two novellas, “Town of Shadows” and “Lüz.”

At Yale, Stern is also co-producer and co-host (with Viveca Morris) of the podcast series “When We Talk About Animals,” which explores the questions that animals raise about what it means to be human. The series is supported by the university’s Human Nature Lab.

Between book tour engagements, Stern took the time to speak with YaleNews about her novel, her Yale studies, and how the two intersect. What follows is an edited version of that conversation.

How did the incident with the lie detector help to inspire your novel?

One of the things that electrified me about that incident is the seemingly fanciful question it raised about all these sounds that are made by the animal world, which we tend to tune out as gibberish: What would it mean to think of them as foreign languages?

A few months later, I read a pop science article about a study that had as its headline: “Birds Tweet Using Syntax.” That stopped me in my tracks, because language has always been the Rubicon for humans. There’s nothing we can cite except language (not even tool-making or puzzle-solving) to differentiate us from other animals. And within language, specifically syntax has been touted as unique to human speech.

I was struck by the pathos and the absurdity of the study showing that there is experimental evidence of birds having syntax. First, what does it mean to even say that? Second, if that is true, it would imply there’s nothing we can cite that distinguishes us from other animals except the fact that we’ve conquered the earth with our machines.

One of the things I wanted to explore in the writing of this book — and why I looked at some scientific experiments on birdsong and at other things that are happening in laboratories that underwrite the whole edifice of psychology — was to see what that might teach us about where we are psychologically as a community.

How long have you been writing? Did you start as a child?

Always. I initially wrote as a compulsive way to record everything because I felt if I didn’t record it, it would vanish forever. That’s poignant to me now, because, of course, you aren’t going to save something by writing it down. But I had this fixation. My writing started that way and then evolved into my means of exploring and digesting the world. I started out with poetry — my college senior thesis grew out of poems, actually; it’s prose form but very experimental [the novella “Lüz”]. I don’t think I had, at the time, the emotional vocabulary necessary to write character-driven fiction.

How would you describe your novel, briefly?

It explores the feeling of being trapped in your own consciousness — and asks how words try but fail to offer an escape from that.

I was also interested in the emotional fallout produced by the realization that we’ve been a catastrophe, ecologically, as a species. We’ve done ourselves in in various ways and we are trying to reckon with that while keeping this accelerating world aloft. At a moment like that, our relationship to the natural world — to other beings — becomes particularly fraught and interesting.

It’s thrilling, and sometimes a grind. Writing creatively re-animates the world for me in such a way that everything starts to be more meaningful, including language itself — even if I’m encountering it in a tax document! The mechanics of it can be grueling, especially in the beginning. One of my teachers shared an apt metaphor for the process: at the start of a project, it’s like being on a roller coaster, when you’re still climbing slowly and hearing all the gears, and you’re filled with dread, even though you’re supposed to be enjoying it. Getting the physics right is so hard. At a certain point, if you’re lucky you’ll get over the hump, and the book will start to write itself. Writing the second half of “The Study of Animal Languages” was like that — it felt like watching a movie in slow motion. But it took a long time to find its momentum.

How did it feel to have your book selected as one of Vanity Fair’s most anticipated books of the year?

It’s immensely gratifying. I’ve written stuff that has gone totally under the radar, which is wonderful in its own way because you have almost complete autonomy over the object it becomes and what happens to it. But it doesn’t sally forth and reach as many people. The idea that a character you created could set up shop in a stranger’s consciousness — that’s thrilling.

Why did you, as an established writer, decide to study at Yale?

I saw coming to Yale as a way of doing a deep dive into the same questions I explore in the novel around the history of psychology and how we came to see our minds in the way we do. I’m still developing my dissertation topic, but I think it will have to do with one particular case study in the history of these animal language experiments. At Yale, you have this embarrassment of riches in the form of majestic libraries; generous minds who are willing to meet and think with you; and space and time to develop questions that you want to pursue critically. In that sense, it feeds the process.

But I’ve always experienced an internal dilemma between the analytical approach to things and the imaginative approach to things, and the novel was my way of staging their quarrel. With the pace of our world, to be able to pause and think in the way that fiction, I think, invites us to do, is such a privilege and part of why I wanted to pursue a Ph.D. in the first place. To be able to see something that you devoted so many years of your life to become an act of communication in the world is very uncanny and exciting, but not something that means your work is done.

Also, what’s great about Yale is that it is filled with all these resources that you don’t necessarily see in the moment, but sometimes you bump into them, whether it’s an institute or some kind of speaker series, or a grant database you realize you haven’t tapped. I find that endearing. For all of its Gothic majesty, there is an understated-ness to all that goes on here.

What Yale classes have you especially enjoyed?

I took a class [taught by Rüdiger Campe] on German essayist/novelist Robert Musil, which was terrific, and I also took a class on psychoanalysis with Moira Fradinger, which was a joy.

I also enjoyed a course on “Animal Law” [taught by Douglas Kysar and Jonathan Lovvorn] at the Law School, which is where I met my podcast co-host Viveca Morris.

Did your podcast grow out of that course?

Yes. Viveca and I would have these impassioned dinners together at Lalibela Ethiopian Restaurant, as we both have intersecting interests around consciousness, psychology, law, and the nonhuman world. We realized that there are all these people on campus we admire and would love to take out to lunch, but then we decided we could talk to them in this different way [via podcasts]. Podcasting is such an exciting opportunity to hear someone’s mind in motion in a pretty unfiltered way. It’s been tremendously exciting to get to explore that medium here. Ecology is such fertile ground for thinking about deep scientific or moral questions.

What’s your next book?

It’s about a young journalist who is attempting to write the biography of a conceptual artist who turned into an eco-terrorist. She travels to Germany, where he is in jail, to start interviewing him for the book. Things kind of spiral from there. But we’ll see. It’s still taking shape. It might evolve into something entirely different.

Do you still record things so they don’t disappear?

I don’t do it anymore. Recording experiences can make them more vivid and memorable, but it can also be exhausting, at least the way I used to approach it. I think it’s somewhat healthier to savor experiences because they won’t last — instead of trying to petrify them in language.

If you were to give advice to budding young writers at Yale, what would you say?

If you start shying away from a subject or question that feels treacherous, don’t be afraid to go there — that’s where the material is.

Cultivate rejection letters, because if you are not getting them you are not shooting high enough. As one of my former teachers said, you should have enough to wallpaper a bathroom, and I certainly do. I’m 28, so I have many more rejections to accumulate.

I would say also — and this is some of the advice I got from [the] Iowa [Writer’s Workshop] that I most value: Creative writing offers you an opportunity to tread in places that would be bizarre or taboo in other genres. Literature has always been the place where we can ask the most uncomfortable questions and explore the parts of ourselves that we might not want to face. So if I could advise my younger self, I would say: If you start shying away from a subject or question that feels treacherous, don’t be afraid to go there — that’s where the material is, and it’s probably why you’re writing to begin with.