“In the Company of Scholars” Lecture Focuses on Current American Politics

Political scientist Jacob Hacker says growing economic inequality in the U.S. has a negative impact on politics and policy. 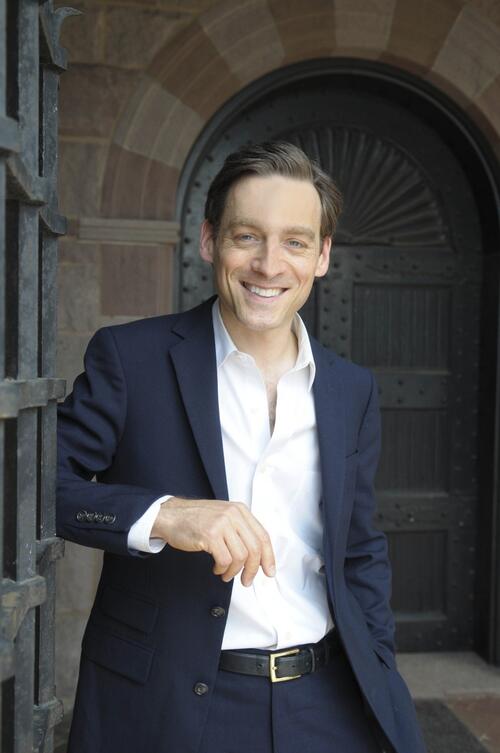 Jacob Hacker presented “Is American Politics Undermining the American Dream?” on December 3, as the first talk of this year’s “In the Company of Scholars” lecture series.

“The middle class – drowning in debt, battered by economic insecurity, losing ground to an increasingly affluent group at the top – has been badly neglected by American politics,” Hacker said. “This is not a natural market development. Government has made the rich richer and turned its back on the middle class.”

According to data compiled by the Congressional Budget Office, from 1979 through 2007, roughly 40 percent of all of post-tax, post-benefit income growth accrued to the top 1 percent of the population. The share of pre-tax income received by the richest one-tenth-of-one-percent “has more than quadrupled, rising from less than 3 percent in 1970 to more than 12 percent in 2007—the highest proportion since the creation of the income tax in 1913.”

During those years, pay for most people has remained essentially stagnant: most of the very modest gains to middle-class incomes were due to increased work hours, not rising pay or lower taxes. “An entry-level male worker with a college degree earns barely more than such a worker did a generation ago, and is less likely to have health insurance,” Hacker said.

Citing data from nonpartisan sources, Hacker argued that this was not simply a reflection of market forces, but reflected specific actions that government has taken and not taken. Even as pre-tax inequality rose, for example, “the effective federal tax rate paid by the top one-tenth-of-one percent has fallen from over 60 percent to around half that.” During that same period, the federal government deregulated the financial market, enabling pay in the finance sector to grow “out of step with what other similarly educated workers earn,” and further exacerbating income discrepancies.

Should the tax cuts proposed by Republican vice presidential candidate Paul Ryan be enacted, he noted, “the top one-tenth-of-one percent would receive a tax cut of $1.18 million, while lower-income Americans would receive a mere $67.” Although Ryan has argued that these cuts will be offset by reductions in tax deductions and credits, Hacker cited nonpartisan sources showing that such tax reform could not possibly make up for the large tax cuts at the top unless Ryan reconsidered the special tax treatment of investment income, which he has said he would preserve.

How could this happen in a democracy that’s supposed to be responsive to middle class concerns? His answer: a combination of millionaire and billionaire donors (he singled out brothers Charles G. and David H. Koch and casino magnate Sheldon Adelson) and lobbying by special interest groups. “Spending linked to the Koch network in this election cycle is set to exceed what was spent on John McCain’s entire campaign,” he said. “Spending by special interest groups to promote their ends went from $0.4 billion in 1983 to $4 billion in 2008, adjusted for inflation.” Data from 2007 indicate that there were 14,789 lobbyists in Washington who were paid to promote special interests, which translates to thirty-four lobbyists per member of Congress.

In previous generations, Hacker said, American democracy was strengthened by labor unions and civic organizations that gave middle-class voters the information they needed to understand what was at stake in policy debates and the political leverage to influence those debates. Those institutions are much weaker today than they once were. Hacker proposed several reforms that could restore a better balance of power and significantly strengthen democracy for the future. These include increasing the transparency of how government works, decreasing the ease with which money buys influence, and empowering groups that represent the general public. By enacting these changes and others, the influence of well-funded special interests would decrease, and government could more closely reflect the values and meet the needs of the broad middle class.

“American democracy rests on the flood walls between economic power and political power,” said Hacker. “Those flood walls are badly broken and must be rebuilt.”

Hacker is the co-author of Winner-Take-All Politics: How Washington Made the Rich Richer and Turned Its Back on the Middle Class (with Paul Pierson, 2010) and author of The Great Risk Shift: The New Economic Insecurity and the Decline of the American Dream (2006), The Divided Welfare State: The Battle over Public and Private Social Benefits in the United States (2002), and The Road to Nowhere: The Genesis of President Clinton’s Plan for Health Security (1997), which won the Brownlow Book Award of the National Academy of Public Administration. He is also co-author, with Paul Pierson, of Off Center: The Republican Revolution and the Erosion of American Democracy (2005) and editor of Health At Risk: America’s Ailing Health System and How to Heal It (2008).

The Dean’s lecture series, designed to bring students and professors together across the disciplines to hear talks by distinguished faculty members, take its name from the opening words of Yale: A short history, by historian George W. Pierson (1904–1993): “Yale is at once a tradition, a company of scholars, a society of friends.”

The series will continue next semester on January 22, when Beverley Gage, professor of history, will speak on “J. Edgar Hoover and the Rise of Modern Conservatism.” On February 19, Kathryn Lofton, the Sarai Ribicoff Associate Professor of Religious Studies and American Studies, will present “Religion and the Practice of American Parenting,” and on April 2, Paul Tipton, professor of physics, will speak on “Finding the Higgs Boson: What Your Taxes Taught Us about Mass.” All talks take place in HGS 119 at 4:00 pm and are followed by a reception in the McDougal Common Room.