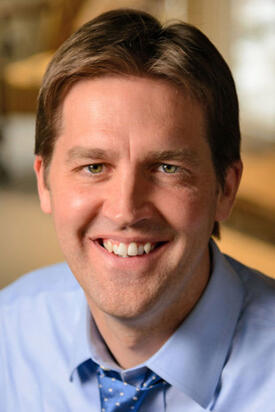 Former university president Benjamin Sasse (PhD 2004, History) is now a US Senator, representing the state of Nebraska. Elected in November, he was sworn into office on January 6, 2015, when the 114th Congress met for the first time. Prior to running for national office, he served for five years as the president of Midland University in Fremont, Nebraska.

Sasse earned his undergraduate degree in government from Harvard University and an MA degree in Liberal Arts from St. John’s College in Annapolis, Maryland. His Yale dissertation, “The Anti-Madalyn Majority: Secular Left, Religious Right, and the Rise of Reagan's America (Madalyn Murray O'Hair)” won both the Theron Rockwell Field and the George Washington Egleston prizes at graduation. Written under the direction of Jon Butler, Glenda Gilmore, and Harry Stout, Sasse’s historical analysis examines the roots of modern secularism and the religious right and provides a thorough history of the Supreme Court’s reasoning and verdicts in Engel v. Vitale (1962) and Abington v. Schempp (1963).

After completing his PhD, Sasse served as chief of staff for the US Department of Justice Office of Legal Policy in Washington, D.C. and taught at the University of Texas, Austin. He was chief of staff to Representative Jeff Fortenberry (R-NE) in 2005 and then held several advisory positions at government agencies. In July 2007, Sasse was nominated by President George W. Bush to serve as assistant secretary for planning and evaluation at the US Department of Health and Human Services. In 2009, Sasse joined the University of Texas LBJ School of Public Affairs’ Center for Politics and Governance as a fellow, before being appointed president of Midland University.

During Sasse's tenure at Midland, enrollment more than doubled from a low of 590 in 2009 to 1,288 in 2013. During the same time, Midland went from a seven-figure deficit to a seven-figure surplus.

While at Yale, Sasse was the assistant wrestling coach at The Taft School and his wife Melissa taught at in the New Haven public schools. They fondly remember hiking up East Rock and going for pizza in East Haven.

Sasse, Melissa, and their children – Elizabeth, Alexandra, and Breck – will continue to live in Nebraska.