Correcting the Record on the Civil Rights Movement in Canada

As a member of the inaugural cohort of Diplomacy and Diversity Fellows, Wendell Adjetey (History) spent a month in Washington and Paris this past spring, studying issues and discussing solutions to some of the world’s most intransigent problems. 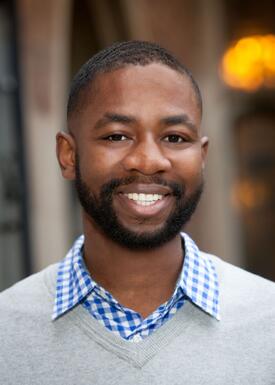 Wendell was selected for this honor by Humanity in Action (HIA), an international educational organization. The fellowships brought 24 American and European graduate students together to discuss the changing landscape of diplomacy and international affairs through the lenses of diversity, pluralism, and democracy. The fellows examined the intersection of diversity with national security, business and finance, immigration, development, human rights, public health, new media, human trafficking, climate change, and other hot-button topics and met with experts at governmental agencies, international NGOs, universities, think tanks, and foreign policy organizations.

“As a graduate student with a strong interest in foreign affairs and diversity, the HIA fellowship gave me an opportunity to explore these important issues with colleagues from various backgrounds. In fact, many of my seminars and formal and informal discussions complemented the work that I do as a fellow in the Office for Diversity and Equal Opportunity. The converse is true, too: the insight that I’ve acquired as an ODEO Fellow allowed me to speak confidently on issues of equity, access, and representation.”

Wendell was also one of 14 graduate students to win a 2014 Pierre Elliott Trudeau Foundation fellowship, the most prestigious doctoral award for the social sciences and humanities in Canada. The Trudeau scholarship supports doctoral students who are committed to solving issues of critical importance to Canada and the world.

Wendell’s dissertation, advised by Professors Glenda Gilmore and Jonathan Holloway, now dean of Yale College, is tentatively titled “Race in the Great Lakes: The Inter- and Post-war Civil Rights Activism of African North Americans.” In it, Wendell examines the civil rights and labor activism of people of African descent in Toronto, Windsor, Buffalo, Chicago, and Detroit. He looks at how migration enabled them to effect political change in both Canada and the U.S. in the period from the Depression (circa 1928) to the end of the 1960s. In addition to interviewing activists and intellectuals who put their stamp on the period, Wendell consults archival sources such as census data, the records of mutual aid organizations and community institutions, economic reports, labor statistics, immigration files, union records, residential deeds, and periodicals. His research has taken him from the Great Lakes to the British national archives, and from Ghana to the University of the West Indies.

“Because of their economic and demographic similarities, their proximity and regional linkages, and the extent to which Canadians and Americans travelled in this borderland region, the setting provides a way to determine how racial and class-based inequalities transcended national boundaries and played out in different ways in different locations.”

Wendell argues “for a shared consciousness across national lines. Canada always defined ‘race’ and forged policies affecting African Canadians under the influence of U.S. race relations. African Americans who lived in the Great Lakes region saw in Canada an alternative site for racial construction, though the spirit of Jim Crow freely permeated Canadian institutions. Because post-World War II Canadian leaders embraced liberal internationalism and multilateral institutions such as the UN, the discourse in Canada focused on human rights as opposed to civil rights. I hope to disrupt the way in which the civil rights freedom struggle is narrated from a U.S.-centric perspective by including Canada and African Canadians as active sites and agents of U.S. and continental racial struggle,” he says.

Wendell’s research also looks beyond North America to consider what he calls “freedom linkages and transnational solidarity” in the Caribbean, West Africa, and the United Kingdom. His own parents came to Canada in the mid-1980s from Ghana. He joined them when he was in the second grade.

Wendell’s research also looks beyond North America to consider what he calls “freedom linkages and transnational solidarity” in the Caribbean, West Africa, and the United Kingdom.

His own parents came to Canada in the mid-1980s from Ghana. He joined them when he was in the second grade. “With only some secondary school education and no technical skills or viable network in a nepotistic society, my parents decided to emigrate, because they felt that Ghana could not provide their children with opportunities to climb the socio-economic ladder.” He grew up in Montreal and Toronto and earned his undergraduate and master’s degrees from the University of Toronto.

Wendell was first drawn to study history and narrative “because my father is an amazing story teller. He regaled me with stories about my ancestors, which gave me a hunger to explore and learn more. He also taught me that knowing your history is a way to firewall yourself against the deception and lies that some use to keep others in a form of bondage.”

Before coming to Yale, Wendell spent three years working as a case manager for JVS Toronto in a federally funded gang intervention program in Toronto. Prior to that, he founded and led the Forster Terrace After School program, an award-winning non-profit organization for marginalized teenagers. He also spent several years consulting on education, health care, and child welfare policy. He has conducted both independent and collaborative research on child soldiering in Sierra Leone, nuclear proliferation, child welfare in Ontario, and education policy in Canada. He published research on the evolution of Canadian immigration policy and U.S.-Israeli strategic relations in undergraduate journals at the University of Toronto.

At Yale, in addition to his research and work as an ODEO fellow, he plays basketball a couple of times a week with a group of faculty members and graduate students from the History Department, law school, and the sciences.

“Wendell is truly a rare gem,” says Michelle Nearon, director of ODEO. “His deep humility, diligence, sense of wonder, self-motivation, resilience, and analytic nature are qualities that have made him a tremendous asset not just to the Office for Diversity and Equal Opportunity, but to the entire Yale University community.”