Raymond Ma (Engineering) came to Yale so he could join the GRAB Lab, headed by Aaron Dollar, the John J. Lee Associate Professor of Mechanical Engineering and Materials Science. Ray learned about the project as an undergraduate and was intrigued because the work “focused on mechanical design instead of software, which is a rarity in the robotics field,” he explains. 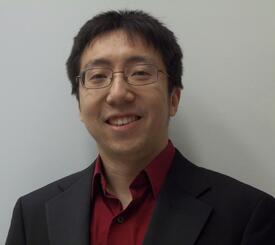 His own background bridges the two areas: he earned bachelor’s degrees in both Computer Science and Mechanical Engineering at MIT.

Currently available artificial hands are either very simple parallel-jaw grippers or highly complex and expensive. “We’re developing hands of a medium complexity, ones that are affordable and only require simple commands, but are capable of more than just basic grasping and pinching,” Ray says.

Ray’s research involves the study of “underactuated” robotic hands that are capable of highly dexterous movements. Underactuation is a technical term used in robotics to describe mechanical systems that do not follow arbitrary trajectories, because they have a lower number of actuators (motors that control the movements of the mechanism) than degrees of freedom (the number of possible motions among the pieces of the mechanism). He is trying to improve the capabilities of robotic hands while maintaining design simplicity, so that the hands “can be used in the field and not just restricted to the controlled lab environment.”

Ray’s own designs feature tendon-driven underactuated fingers. Underactuated hands have been shown to be easier to customize than simple grippers, because they adaptively conform to the surface of objects without the explicit need for sensors or complicated feedback systems.

Ray and colleagues fabricate the parts for their artificial hands using a commercially available 3D-printer. They aren’t the first to go this route, but previous designs have had severe limitations.

“The 3D-printed prostheses project that has gotten the most attention recently is probably Robohand,” he says. “While absolutely awesome, the design is most appropriate for a very particular hand disability. Also, it involves quite a few parts and can be fragile.

“3D printing allows us to prototype and validate designs much more quickly than conventional methods of fabrication. However, parts made with accessible 3D printers are often weak and brittle, unsuitable for long-term use. A big part of the work done in our lab is to figure out how to improve parts and mechanisms created through 3D printing so that they are more robust and last longer. We’ve managed to get around this limitation by considering different design strategies, primarily by molding rubber urethane joints and connecting them with metal inserts. As a result, we’re able to make hands optimized for the limitations of 3D printing that are more than capable in most robotics research applications. This then allows researchers to more quickly modify hand designs on the fly instead of relying on a single static design made available by some vendor. We’re moving away from the ‘one size fits all’ approach in design and can now create custom solutions for each case.” 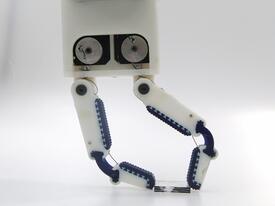 Recently, to accelerate the pace of this important project, the GRAB Lab has initiated the OpenHand Project, which shares information freely online and invites contributions from the open-source user community. The goal is to make it easier for researchers to “customize their own robotic hand, download the plans, and then print all the necessary parts in their own lab instead of depending on outside vendors.” That approach is essentially “unprecedented, even with the rise in the number of accessible 3D printers currently available, so it’s pretty exciting. But it’s also a bit scary and frustrating, since we have to worry about not only how the users will operate our hands, but also how they assemble and even print our hand parts. That’s not something an engineer ordinarily has to consider,” Ray says. But if all goes well, the result will be “robotic hands that are durable as well as flexible and easy to make.”

Model files and assembly instructions are all available on their website, “and we’ve gone to great lengths to make them as easily modifiable and accessible as possible. We’ve put a lot of work into our tutorials on YouTube and our website because in the open-source community, especially with hardware, it’s not enough to put your designs out there. You really need to make adoption as easy as possible and properly motivate people to try out new designs. We hope that other research institutions that build our hands will make suggestions and changes that will allow us to improve the overall project at a much faster pace.”

OpenHand has been Ray’s “pet project the past year — everything from initial design to prototyping to testing to releasing documentation for other users to iterating the designs off of the feedback we get. We’ve been trying to grow the project by recruiting more undergraduates,” Ray says, but he has been the primary developer up until now. Ray is also responsible for “pretty much everything” on the OpenHand website: pictures, design, text, code, upkeep, and updates. He also works on the YouTube channel Yale Grab Lab, where they post instructional videos of their hand designs.