Don’t Judge a Book by Its (Lack of a) Cover

The physical makeup of an old book tells an important story. When stage plays were published in Shakespeare’s day, they were usually printed as small, quarto-size playbooks, in a “stab-stitched” form without traditional bindings. Scholars have generally considered this cheap format to be a sign that the plays weren’t highly regarded as literature. 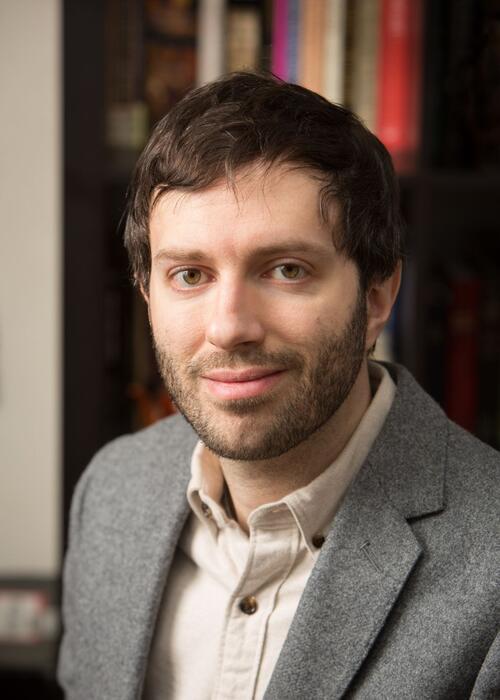 Aaron Pratt (English) explains, “They had either no covers whatsoever or only a flimsy wrapper, and were held together with the early modern equivalent of staples: booksellers stabbed a length of thread through the book’s gutter in three or four places and tied off the ends. What examining more than 3,000 early modern books has made clear, however, is that works by esteemed poets like Edmund Spenser and Sir Phillip Sydney actually circulated in much the same humble form as plays. Research for the first chapter of my dissertation has brought us back to the old adage: don’t judge a book by its cover (or lack thereof).”

During the 16th and 17th centuries, some books, including plays, were bound in luxury materials like leather, but “in the great majority of cases, booksellers chose the option that most effectively balanced functionality and economy: stab-stitching,” Aaron says. “This fact changes not only our approach to the way we evaluate the meaning of material features like bindings, but also the ways we understand the place of printed drama in the reading lives of its contemporaries.”

Aaron is not only a researcher, but also a collector of rare books, “to the extent, at least, that my graduate student budget can accommodate. The book that attracted me to early modern studies in the first place was John Foxe’s Actes and monuments, a large and extensively illustrated work of church history and anti-Catholic polemic known as the Book of Martyrs. With money I saved up after college while working in IT, I tracked down and bought a copy of the first volume of the 1583 edition. It was the most expensive thing I had ever purchased, and turns out to have been something of a gateway drug — almost four years later I found a copy of the second volume, completing the work, and have bought (and sold) dozens of other early books since. I frequently use books from my collection in my research, and being able to examine them very carefully in the comfort of my own home has proven very fruitful. The observation that led me to my entire dissertation project was one that happened at home, with a 17th-century book that I bought on eBay for something like $200 or $250 dollars. I didn’t even especially want the book; I had submitted a bid in a particularly impulsive moment late at night and ended up getting it. The book, a copy of Barten Holyday’s Latin treatise, Philosophiæ polito-barbaræ specimen (1633), had been rebound in a nice 20th-century morocco binding, but I noticed a set of four evenly spaced holes in the gutter of each leaf, revealing that it had been sold stab-stitched. I thought, if a Latin work of philosophy was sold in this way, what should we think about playbooks?”

Playbooks were important, he says, “because in most cases they contain the only texts that survive of the plays that we now cherish, teach, and stage anew. Shakespeare’s plays exist for us today because of the efforts of early publishers and the printers they employed. The books themselves allow us to tell an important part of the story of their early circulation and reception, a story about the history of English literature.”

He first became interested in early modern books — physical books, not the literature printed in them — toward the end of his undergraduate career at Ohio State University. “I immediately found them fascinating, in part because they’re historical artifacts that provide us with a window into the past. Surviving books are often the only access we have to historical readers, the very first men and women who sat huddled by a candle and read the works of Shakespeare and his contemporaries. I quickly saw that working with books qua books promised new answers to questions about literary reception and meaning that have long challenged scholars.”

Aaron chose Yale for his graduate studies because of the Beinecke Rare Book and Manuscript Library’s “formidable collection of early modern English books… Beyond that, I was very impressed with the faculty in both English and History. David Kastan, who is now my adviser, had advised former professors of mine while at Columbia, scholars I very much admire and respect. His interest in book history, combined with his great track record, were a major draw.” 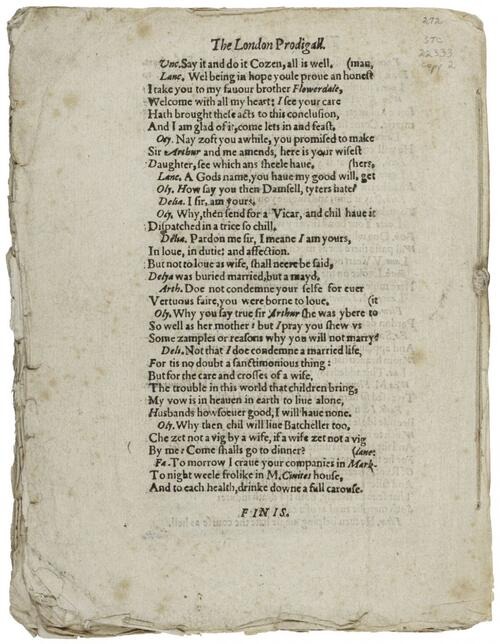 In addition to the Beinecke’s collections, the Elizabethan Club’s holdings “truly are jaw-dropping,” he says. During a two-month fellowship last summer, he examined close to 3,000 rare volumes at the Beinecke, many of which were plays. He has also done research in the special collections of Ohio State, the Folger Shakespeare Library in Washington, D.C., and the Bodleian and British libraries in the UK. “Part of the joy of working with rare books is being able to travel to such varied and unique repositories. I am always surprised by the treasures I come across. If you look closely and carefully enough, there’s always something new to be found.”

Aaron’s passion for old books was a catalyst in creating Yale’s Program in the History of the Book. Working with his adviser and Kathryn James, Curator of Early Modern Books & Manuscripts & the Osborn Collection at the Beinecke, he helped integrate an existing graduate student working group and an ongoing lecture series into a new and thriving program.

Aaron says, “The Program in the History of the Book has made it possible for me to meet notable scholars in the field of book history and discuss their research and its methods. What more could I ask for? The program has also enabled Yale to consolidate and build a community of people interested in book history within the university. The Beinecke is easily one of the strongest research libraries in the country, so it seems only appropriate that Yale also be a center for intellectual activity focused on the objects it preserves and actively acquires. Interest and attendance have been more than we could have hoped for.”

You can find him on Twitter @aarontpratt, where he writes about rare books, English literature, and punk records.