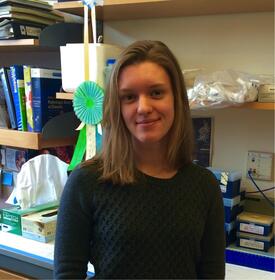 Kristofik is working to create better small-diameter (less than 6mm) arterial grafts. Vessels this size include the coronary arteries as well as some arteries in the arms and legs, she explains. These narrow-vessel grafts tend to fail when blood clots form after they are surgically attached. Her goal is to design “off-the-shelf” blood vessels that don’t get clogged by clots.

“The current medical standard for replacement or bypass of clogged arteries is to remove the patient's own saphenous vein (from the leg) and use that. However, there is only so much of that vein available, and vein grafts may eventually fail, meaning the patient may require another bypass and not have enough vein left for another surgery,” she says.

“My lab is interested in a particular protein, thrombospondin-2. It has been shown that when mice lack this protein, they bleed longer than usual. The condition is similar to hemophilia, except the problem isn't in cells that won't clot — it's in the extracellular matrix that is supposed to trigger the clot. We're trying to take advantage of this phenomenon.”

Kristofik works closely with two faculty members in Yale’s Vascular Biology Program: her adviser, Themis Kyriakides, and Laura Niklason, whose lab supplies rat aortas to serve as the load-bearing portion of the graft. The aortas are “decellularized” in the lab, which means that all the cells are lysed and removed, leaving only the extracellular matrix. The extracellular matrix is everything in a living organism that isn't cells: structural proteins that sit outside the cell (but attach to cells). These proteins help give tissues their strength and allow them to stay together in the right shape.

This technique could eventually be applied to grafts made of other materials, including polymers, which would be entirely artificial, she says.

Kristofik was born in France, but moved with her family to Connecticut when she was a year old. As a freshman at Yale, she took the “Frontiers of Biomedical Engineering” course, taught by W. Mark Saltzman, the Goizueta Foundation Professor of Biomedical Engineering, and found the subject fascinating. She worked in his lab as an undergraduate and took Kyriakides's class, “Biomaterial-Tissue Interactions,” as a junior, which is where she first learned about the project she is now researching for her PhD.

She decided to stay at Yale for her graduate degree, because, she says, “I really love the collaborative atmosphere and the amazing resources, and I think there is just so much exciting science happening here!”

When she’s not in the lab, she likes to read, bake, and go kayaking.