Kristofer Covey (Forestry & Environmental Studies) and colleagues discovered that sick trees are exacerbating global warming by producing huge quantities of methane. He was awarded third prize for his research presentation at the Society of American Foresters’ annual conference in Spokane, Washington, this past October. 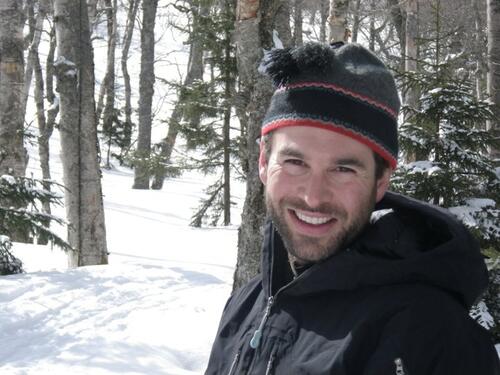 Kris’s work was published in Geophysical Research Letters. “Microbial infection of one of the largest, biogenic sinks for carbon dioxide, living trees, might result in substantial, biogenic production of methane,” the article states. Sixty trees sampled at Yale Myers Forest in northeastern Connecticut contained concentrations of methane that were as high as 80,000 times ambient levels. Normal air concentrations are less than two parts per million, but the Yale researchers found average levels of 15,000 parts per million inside these trees. To measure the level of methane, they drilled small holes in the trees and withdrew gas that they bottled and tested using a gas chromatograph. They also took wood samples, which they incubated in jars from which the oxygen was removed. These samples also produced methane.

“Because the conditions thought to be driving this process are common throughout the world’s forests, we believe we have found a globally significant new source of this potent greenhouse gas,” Kris says. The estimated emission rate from an upland site at the Yale forest is roughly equivalent to burning 40 gallons of gasoline per hectare of forest per year. (A hectare is a metric unit of area defined as 10,000 square meters.) The authors estimate the methane release has a global warming potential equivalent to 18 percent of the carbon being sequestered by these forests.

“If we extrapolate these findings to forests globally, the methane produced in trees represents 10 percent of global emissions,” said Xuhui Lee, the Sara Shallenberger Brown Professor of Meteorology and a co-author of the study.

Among the tested trees, red maples had the highest methane concentrations, but other common species, including oak, birch, and pine also produced the gas. The rate of methane emissions was 3.1 times higher in the summer, suggesting that warmer temperatures may lead to increasing levels of forest methane that, in turn, lead to ever-higher temperatures.

The trees producing methane are between 80 and 100 years old and although outwardly healthy, they are being hollowed out by a common fungal infection that slowly eats through the trunk.

“No one until now has linked the idea that fungal rot of timber trees, a production problem in commercial forestry, might also present a problem for greenhouse gas and climate change mitigation,” said Mark Bradford, a co-author and assistant professor of Terrestrial Ecosystem Ecology at F&ES.

The other co-authors of the paper, “Elevated Methane Concentrations in Trees of an Upland Forest,” are Stephen Wood (MESc, 2011), now a graduate student at Columbia University; and Robert Warren, former postdoctoral researcher at Yale and now an assistant professor at Buffalo State (SUNY).

The methane research is the focus of his dissertation, advised by Chadwick Oliver, the Pinchot Professor of F&ES and director of the Global Institute of Sustainable Forests. In addition to identifying this new source of methane, Kris is exploring ways to better quantify its magnitude by directly measuring release through bark. He is also working on studies that look at different species and forest types across various age classes and pairing his field observations with laboratory studies.

Kris is from the southern edge of the Adirondack Park in upstate New York. His early interest in forestry dates from camping in the national parks of the western U.S. He continued to camp and explore the outdoors while earning his undergraduate degree in physics from the State University of New York at Potsdam. Prior to Yale, Kris taught science and environmental science in the Mount Everett Regional School District in western Massachusetts, where he founded the Southern Berkshire Regional Arboretum, a K-12 student-led urban forestry project. As an environmental technician, he monitored ground water for the Hudson River Dredging Project in Saratoga Springs, New York.

Kris is a past president and active member of the Yale student chapter of the Society of American Foresters. He manages the Landscape Management Laboratory, the Greeley Memorial Laboratory greenhouse, and is the director of New Initiatives at the Yale School Forests. In 2009, he was primary investigator for a project that studied a variety of evergreen oak forest in Bhutan. He was also primary investigator for a field project studying ice storm damage in southern New England oak forests.

In addition to his scientific interests, Kris has been a professional whitewater kayaker and guide and continues to kayak and ski when he finds time.