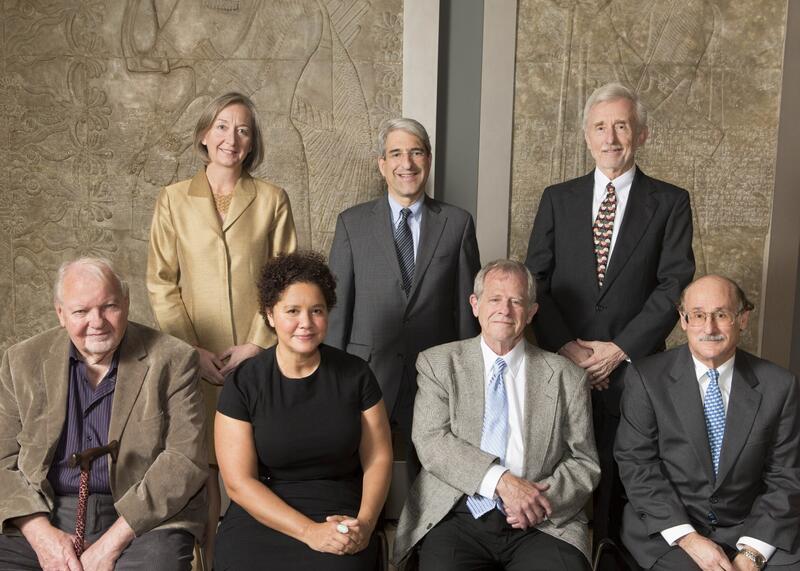 Earlier that day, each honoree will present a talk and meet with faculty and students. Jameson will speak on “Proust and the Persistence of Narrative” at 4:00 pm in the Whitney Humanities Center auditorium, 53 Wall Street.

Lambowitz will give a talk titled “Biotechnological Applications of Mobile Group II Introns and Their Reverse Transcriptases: from targetrons to new methods for RNA-seq and the analysis of non-coding RNAs” at 2:00 pm in Brady Auditorium, 310 Cedar Street. “A Conversation with Ted Lowi” will be held at 12:00 noon in Room A001 of ISPS, 77 Prospect Street. Thomas will present “Science and Education in the Digital Age” at 4:00 pm. in the Luce Hall Auditorium, 34 Hillhouse Avenue.

Jameson (PhD 1959, French) is a world-renowned cultural critic and the William A. Lane, Jr., Professor of Comparative Literature at Duke University, where he has been on the faculty since 1985. He is the founder and director of Duke’s Institute for Critical Theory. With Sartre, The Origin of a Style (his very first book, published by Yale University Press in 1961), he became a prominent voice in comparative literature. Whether writing about the function of a literary device (e.g., the flashback), a genre (such as allegory) or an entire literary movement (such as “magical realism”), Jameson connects literature to economic forces, specifically Marxism. The Political Unconscious: Narrative as a Socially Symbolic Act is one of the most cited of all works on English language literary theory in the past half century. Jameson’s interests span many countries and languages, genres, and disciplines, including modernism and postmodernism, science fiction, Third World literature and cinema, the Frankfurt School, and more. He is author of 20 books of criticism and over 150 scholarly articles.

Lambowitz (PhD 1972, Molecular Biophysics & Biochemistry) is director of the Institute for Cellular and Molecular Biology at the University of Texas at Austin, where he holds two endowed professorships and runs a ground-breaking lab. His research employs a combination of genetic, biochemical, and structural approaches to investigate gene expression, RNA splicing, mobile self-splicing introns, and retroviral-like genetic elements. Among other outstanding accomplishments, his lab discovered and described Neurospora mitochondrial retroplasmids — the simplest retro-element — laying the groundwork for tracing the evolution of modern retroviruses such as HIV back to much simpler RNA viruses. He also devised a method to target a single, specific gene in an organism’s DNA, to alter its biological function. This has been developed commercially and become a powerful tool for “genetic surgery,” in widespread use for bacterial gene disruption.

Lowi (PhD 1961, Political Science) is the John L. Senior Professor of American Institutions at Cornell University and former president of both the American and the International Political Science Associations. His 1969 book, The End of Liberalism, was an instant classic and has left a lasting mark on the field. His classification of the public policy realm into “distributive,” “redistributive,” and “regulatory” sectors has been enormously influential in practical politics and political theory. His recent research and writing involves the politics of globalization, a critical history of the American Democratic party, and a computer project that links information to methodology, creating a new approach to political theory. He is co-editor, with Isaac Kramnick, of The Norton Anthology of American Political Thought and author of The End of the Republican Era, The Pursuit of Justice, and other books.

After completing her dissertation on membrane traffic events in neuroendocrine cells and neurons, Thomas (PhD 1993, Biology) accepted a position as an assistant editor with the journal Nature, where she was responsible for selecting the cell biology and neurosciences manuscripts to be published. She was quickly promoted to associate editor. After launching the highly successful Nature Insight program, Nature Cell Biology, and the Nature Reviews series, she was appointed president and managing director of Nature Publishing Group (NPG), with overall editorial and financial responsibility for NPG’s projects. Under her leadership, NPG expanded into the physical sciences and clinical medicine and launched new titles. In 2007, Thomas became CEO of Macmillan Publishers Ltd, parent company of NPG, creating highly innovative divisions and promoting science education at every level. She was the first publisher to join the advisory board of the National Institutes of Health.