Fracture Toughness, or If You Drop a Smartphone.... 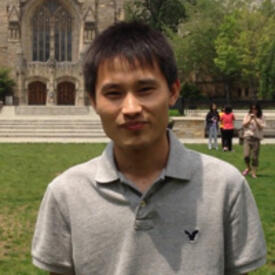 If you drop a smart phone, the glass screen has a nasty way of cracking when it hits the floor. The glass itself might be strong enough to withstand the impact, but invisible structural flaws weaken its resistance to fracture. Wen Chen (Engineering and Applied Science) studies the phenomenon of fracture toughness.

“Flaws are almost inevitably present in engineering materials and structures,” Chen explains. “They originate from fabrication, mechanical damage, corrosion, or structural features such as micro-cracks, corners, holes, and welded joints. Flaws can impose dramatic effects on materials’ properties. In many cases, imperfections even overshadow the intrinsic properties of materials,” he says.

“In brittle materials such as ceramics and oxide glasses, flaws in the form of pores and micro-cracks can dramatically degrade strength and toughness, and often cause premature brittle fracture at a stress well below their estimated yield strength. As a consequence, most structural materials, particularly brittle ones, are not limited by their strength, but rather by their flaw resistance (or fracture toughness). Therefore, fracture toughness is often the limiting design consideration, and a fundamental understanding of the material’s response to flaws is of great significance.”

Chen has developed a novel method to measure the fracture behavior of different materials precisely, and he has extended his research to include metallic glasses, a new class of materials discovered in the 1960s. Metallic glasses are formed by rapidly quenching the melted constituent material so quickly that it does not have sufficient time to re-configure into an ordered crystalline structure, he explains. The resulting amorphous microstructure endows metallic glasses with unusual properties such as high elasticity, high strength, and superior corrosion resistance. These amorphous properties and the existence of a supercooled liquid regime of metallic glasses allow them to rapidly soften and take shape like plastics upon heating. This process is called “thermoplastic forming.” Since metallic glasses are about three times stronger than steel at room temperature, they are proving to be very useful in a variety of industrial applications. Chen chose Yale for his doctoral studies “mainly due to the great academic reputation of my adviser, Professor Jan Schroers, as an expert in researching metallic glasses.”

Understanding the flaw resistance of metallic glasses is of practical, commercial importance, but it poses significant challenges because controlling the fracture toughness sample quality is extremely difficult. Chen measures the flaw resistance of metallic glasses using the thermoplastic-forming technique described above, combined with silicon photolithography. Photolithography, a process often used in microfabrication, uses light to transfer a geometric pattern from a photo-mask to a light-sensitive chemical on the substrate. A series of chemical treatments then either engraves the exposure pattern into, or enables deposition of a new material upon the substrate.

“Such an approach allows me to fabricate fracture toughness samples in a precise manner, originating from the highly repeatable microstructural control during thermoplastic forming. By this method, I can independently vary and manipulate the flaw size with a precision of a few microns, and thereby systematically decode the critical flaw size that a specific metallic glass can tolerate.” This highly versatile and predictable use of artificial microstructures is “a powerful toolbox to understand the flaw tolerance behavior in metallic glasses” that will allow scientists to design high performance metallic glasses and structures for a wide range of practical purposes.

Chen was born and brought up in Xinghua, China. He earned his BS degree from Nanjing University of Science and Technology and his MPhil degree from Hong Kong Polytechnic University before coming to Yale. He first became interested in materials science in high school, when he realized that materials with fundamentally different chemical formulae display dramatically distinct properties. He was also stirred by the way “the development of materials plays a crucial role in the progress of human civilizations. For example, the discovery of iron brought human beings out of the age of stone tools, and the development of microelectronic materials took people into a new information era.”

Nowadays, when he has spare time, Chen likes sports, fishing, music, working out, hiking, and movies. He plays soccer and admits to watching Premier League games every week. He roots for Arsenal Club.