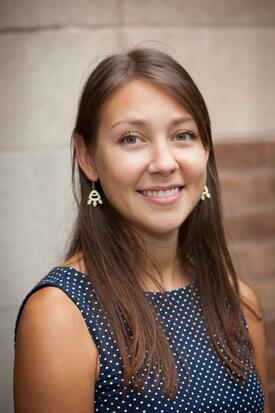 Growing up in Anchorage, Holly Miowak Guise (History) heard stories about discrimination that her Iñupiaq family had endured when they left Unalakleet, their tiny (pop. 700), remote village in the Alaskan bush. At Stanford, where she majored in Native American Studies with a minor in History, she came across an article by Terrence Cole, “Jim Crow in Alaska,” and realized that the stories she had heard as a child were true, even though not widely known.

The project she began in 2008 has evolved into her doctoral dissertation, which focuses on the experience of Alaska Natives during World War II. Using oral histories and archival materials, Holly examines the ways that “race, gender, and colonialism influenced Alaskan racial categorization and the construction of ‘indigeneity’ as a racial category.” She also looks at how “Indigenous people resisted and challenged US colonialism in daily life.”

This past autumn, Holly conducted interviews in Anchorage, Juneau, and Metlakatla, with funding from the Ford Foundation and the Oral History Fellowship from the Yale Department of History. She met with Tlingit elders who remembered the war years, and two Tsimshian WWII veterans who had been stationed in Papua New Guinea and the Aleutian Islands, only to return stateside and face discrimination.

“One elder described how after the war, he was declined service at a restaurant. He went home, changed into his Army uniform, returned to the restaurant, and then the restaurant served him. The oral histories indicate Native resistance and ways that Native people empowered themselves during challenging times.”

She plans to conduct more interviews this year in Anchorage, Fairbanks, and Bethel, adding to those she did last fall and others in 2013 in Unalakleet, Nome, Wasilla, and Kodiak. In addition to oral histories, she does research at the Alaska State Archives, Sealaska Heritage Institute, University of Alaska (Anchorage) Special Collections, University of Alaska (Fairbanks) archives, and the Library of Congress.

In February, Holly presented “Gendered Racial Boundaries in WWII Alaska” to the Yale Group for the Study of Native America. Her talk explored “the (mis)representations and stigmatization of Alaska Native women’s bodies in material culture, language, and territorial ordinances.” Holly served as the graduate coordinator for YGSNA in 2013-14. 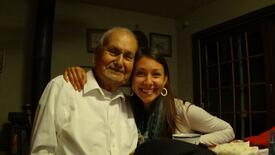 “The Alaskan colonial landscape and Native-white race relations changed during World War II,” she says. “During an era of Alaskan segregation prior to the passage of the 1945 Alaska Equal Rights Act, military ordinances that separated Native women from soldiers constructed a racial boundary that sought to separate Natives from whites.” Her lecture examined “the ways that Native women’s bodies represented a racial boundary and the ways in which Native activists, interracial unions, and political allies challenged racial separation. Interracial dating represented protest, a way to exercise power, defiance against military surveillance and social discrimination, and an effort to create Alaskan equality.”

At Yale, Holly has been a Davenport Graduate Affiliate, a fellow at the Office for Diversity and Equal Opportunity, and co-chair and co-founder of the Indigenous Graduate Network on campus. She has worked and volunteered at the Native American Cultural Center, taught beading classes on campus, and enjoyed watching Yale hockey games. In her spare time, she I likes hiking, beading, and visiting beaches, including Lighthouse Point “and anywhere else I’m lucky enough to travel to.”

She decided to earn her PhD at Yale after attending the History Department’s visiting day for admitted students, where she met Ned Blackhawk, who has become one of her advisers. “I knew I wanted to work with him during my graduate student years. I met a variety of inspiring faculty members” at that event, she says. “The Yale Group for the Study of Native America was a strong draw for me, since it demonstrated institutional commitment to Native studies and Native history. The faculty and students in YGSNA and the Lamar Center for the Study of Frontiers and Borders are special communities, as are students within the Native American Cultural Center. Yale’s Directed Independent Language Study Program is awesome, and I studied Iñupiaq for four semesters. I have a great committee comprised of Ned Blackhawk, Birgit Brander Rasmussen, Jonathan Holloway, and Matthew Jacobson.”