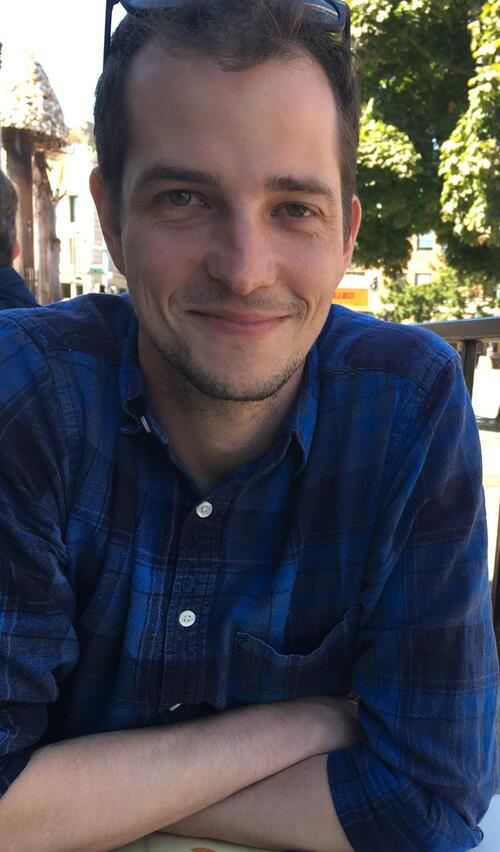 As an undergraduate majoring in Physics at the University of Chicago, Ben Brubaker realized he was fascinated with the big questions unique to the field.

“Questions like: what is the nature of dark matter?” Brubaker said. “The more you learn about these things, the more beautiful and strange they seem, and it’s most of the stuff that exists in the universe, and we wouldn’t be here without it.”

For the uninitiated, “dark matter” is the term given to the extra mass in the universe that seems to exist but cannot be accounted for.

“It’s not just that we’re bad at calculating the mass of stars and dust. We have a good way of measuring the density and number of protons in the universe,” Brubaker said, referring to one of the subatomic particles contained in every atom, which in turn is the smallest constituent part of matter. “Most of our universe is made of stuff we can’t account for. Sometime in the early universe, something that wasn’t protons was created. It has dictated the evolution of galaxies, but only weakly interacts with normal matter, and passes through us without a trace. As Earth orbits the center of the galaxy, our planet moves through a headwind of dark matter, but it just passes through us.”

As a PhD student at Yale, Brubaker devoted his research career to the slow but rewarding search for dark matter. On October 23, he received the 2019 Mitsuyoshi Tanaka Dissertation Award in Experimental Particle Physics “for outstanding contributions to the HAYSTAC (Haloscope At Yale Sensitive To Axion Cold Dark Matter) experimental detector, especially in its design and construction incorporating quantum measurement techniques, in addition to its operation including data acquisition and novel analysis techniques.”

“Basically,” Brubaker explained. “I focused on designing a detector that would be sensitive to a specific type of theoretical particle that might be dark matter. We operate the detector and as our planet moves through the galaxy, dark matter moves through us, and if our detector is sensitive to the right kind of particle, we find it. But if dark matter isn’t this type of theoretical particle, then we can at least say it’s not that.”

“Ben was an outstanding graduate student,” said Professor of Physics Steve Lamoreaux, Bubaker’s advisor. “His PhD dissertation is extraordinarily well written and is possibly the best treatise on the role of the axion as a dark matter candidate together with a review of the experimental techniques.  Ben was a once-in-a-lifetime student.”

Brubaker was attracted to this project because it’s an example of an experiment examining the fundamental nature of the universe that also entails hands-on work.

“Working at FermiLab after undergraduate, I realized I really liked systems that were relatively small. Something that can fit in your own lab as opposed to, say, the Large Hadron Collider in Switzerland. A hundred years ago, scientists could really discover fundamental things about nature in a table top physics lab. Most things now require large teams, large physical spaces and equipment. That’s great, but on one of those teams everyone’s task is very separated and specific, and the task of hands-on building is estranged from the analysis. I like systems where I can understand every aspect of the experiment.”

Brubaker is currently a postdoctoral research associate at the University of Colorado-Boulder.