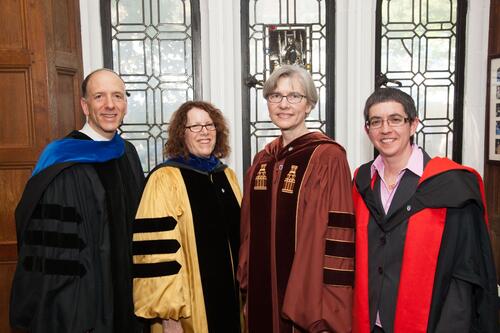 Professors Naomi Lamoreaux, Verity Harte, and Hal Blumenfeld were honored at this year’s Convocation with Graduate Mentor Awards. These awards recognize advisers who have been exceptionally supportive of their students’ professional, scholarly, and personal development. The winners were chosen from more than 50 faculty members who were nominated anonymously by their students.

Lamoreaux is the Stanley B. Resor Professor of Economics and History and chair of the Department of History. In addition, she is a research associate at the National Bureau of Economic Research. One of her grateful advisees wrote, “Naomi is a great mentor because of who she is – a successful, kind, and generous role model, especially for young women trying to make it in academia.”

Harte is professor of philosophy and classics who specializes in ancient philosophy. In nominating Harte, one student wrote, “She has almost single-handedly created the Joint program in Classics and Philosophy since arriving at Yale in 2006, and has constantly worked to improve it as a training program for Ph.D. students.”

Blumenfeld is the Mark Loughridge and Michele Williams Professor, director of the Yale Clinical Neuroscience Imaging Center, and professor of Neurology, Neurobiology, and Neurosurgery at Yale Medical School. His research focuses on epilepsy and the neural mechanisms of consciousness. One student wrote that Blumenfeld’s “passion for his work … is unmatched by any mentor I have encountered. He has an excitement for his research that is contagious.”