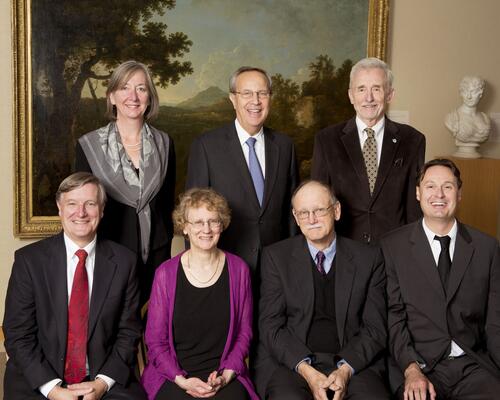 Each medalist gave a public lecture and met with current graduate students in their field. To cap the celebration, a private dinner was held at the Yale Center for British Art, at which the medals were conferred by Dean Thomas Pollard, President Richard C. Levin (PhD 1974, Economics), and Valerie Hotchkiss (PhD 1990, Medieval Studies), chair of the GSAA.

The medals recognize achievements in scholarship, teaching, academic administration, and public service that reflect the many accomplishments for which Cross (1862-1948) himself was known. He served as dean of the Graduate School of Arts and Sciences from 1916 to 1930, and when the Hall of Graduate Studies was built (1930-32), numerous bricks in the entryway were incised with the letter “W” and a cross, in recognition of his contribution to the growth and success of the school. Along with Tucker Brooke, Cross was the editor of the Yale Shakespeare; he also edited the Yale Review for almost thirty years. His books include Life and Times of Laurence Sterne (1909) and The History of Henry Fielding (1918), and several others on the English novel. After he stepped down from Yale, he was elected governor of Connecticut from 1931 to 1939. 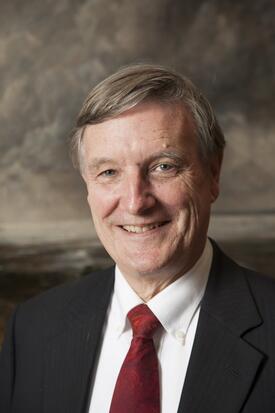 Aber, provost and vice president for academic affairs at the University of New Hampshire, is a renowned scientist, educator, administrator, and public servant. He is one of the world’s leading ecologists, internationally known for his groundbreaking work on nitrogen cycling, sustainable ecosystem management, climate change, and the effects of acid rain on forests. His basic research and applied studies on how nutrients move through forests played a major role in defining the field of ecosystem ecology. He and his students pioneered the use of remote sensing to detect chemical signals in tree canopies that enable researchers to monitor forests, from a regional to a global scale. With colleagues, he developed a pioneering computer simulation model now used around the world that allows scientists to study immensely complex forest ecosystems. He has authored or co-authored more than 200 scientific papers and written the basic text in his field, Terrestrial Ecosystems. He also is co-editor of Forests in Time: The Environmental Consequences of 100 Years of Change in New England.

Aber has been a member of the faculty at the University of New Hampshire since 1987. In 2009, he was named a University Professor, the University of New Hampshire’s highest form of recognition for excellence in teaching, scholarship, and engagement. In addition to teaching undergraduate and graduate courses and mentoring graduate students and post-doctoral fellows who have gone on to make important contributions of their own in the field, he founded and directed a thriving interdepartmental doctoral program in natural resources and ecosystems and established an organic dairy research farm. Over the years, Aber has taken on a succession of administrative posts, including director of the Complex Systems Research Center and vice president for research and public service, before being named to his current positions in 2009.

He has given invited lectures and seminars across the country and around the world, served on advisory groups and panels for dozens of environmental commissions, chaired the New Hampshire Experimental Program to Stimulate Competitive Research (a National Science Foundation initiative), and served on the Durham Town Council, Durham Economic Development Committee, and Durham Public Library Board of Trustees. 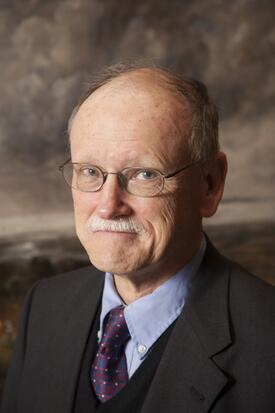 McCoy’s research interests have ranged from the tense relationships between religion and politics to masculinity and the military, from colony and empire to the targeting of civilian noncombatants by state covert agencies. In his most recent book, Policing America’s Empire: The Philippines, the United States, and the Rise of the Surveillance State (2009) he explores the power of police, information, and scandal in shaping both the modern Philippine state and the American internal security apparatus. In 2011, the Association for Asian Studies awarded Policing America’s Empire its George McT. Kahin Prize, citing McCoy’s “narrative and analytical gifts, his years of painstaking research, and his sure sense of the ominous global implications of his story.”

McCoy’s research has produced seventeen books and over 200 articles, written both for scholarly and general audiences. His co-edited volume, Colonial Crucible: Empire in the Making of the Modern American State (2009), shed new light on the day-to-day workings of the American occupation of the Philippines. A Question of Torture: CIA Interrogations, From the Cold War to the War on Terror (2006) turned an international spotlight on American sensory deprivation procedures that led to the abuse of prisoners at Abu Ghraib. An Academy Award-winning documentary, Taxi to the Dark Side, was based on McCoy’s work. His earliest books, Laos: War and Revolution (with Nina S. Adams, 1970), The Politics of Heroin in Southeast Asia (1972), and Drug Traffic: Narcotics and Organized Crime in Australia (1980), established him as the leading scholar in the field. Closer than Brothers: Manhood at the Philippine Military Academy (1999) exposed the strong bonding among Filipino soldiers-in-training that underpinned the military dictatorship in the postwar era. McCoy’s archival research uncovered the fact that Ferdinand Marcos’s military medals were fake and his release of that information three weeks before the election in 1986 helped end a repressive dictatorship. 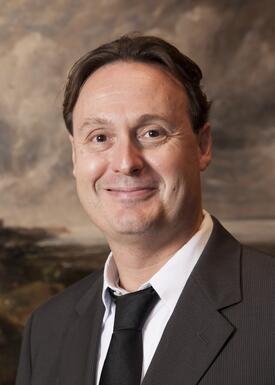 After leaving Yale, Rothberg launched Curagen, one of the first high-throughput genomics companies that set out to identify and target genes involved in specific diseases and then mount efforts to develop drugs to combat the diseases. Under his leadership, from 1991 to 2005, Curagen launched more than a dozen clinical trials. During this same period, Rothberg founded 454 Corporation (now 454 Life Sciences) to develop breakthrough technology for sequencing DNA. A method he devised worked stunningly quickly and at low cost. It was the first of what are called “second generation sequencing” – technologies that permitted researchers to establish the complete genome sequence of a human being in only a few months. 454 Life Sciences was also the first to release the complete genome of an individual (James Watson, of Watson and Crick fame), and has sequenced the ancient DNA of a Neanderthal.

Rothberg’s next projects were RainDance Technologies, an innovative microfluidics company that carries out collaborative genomic and pharmaceutical research, and most recently, Ion Torrent Systems, Inc., which innovated an outstandingly successful DNA sequencing system. This new approach exploits the proton release during each nucleotide coupling to monitor DNA synthesis and combines that with miniaturizing silicon chip technology. This powerful combination of advances has given rise to inexpensive DNA sequencing machines that can sequence the equivalent of an individual genome within two days and will eventually make it affordable to carry out personal genome sequencing for every individual. Ion Torrent was recently sold to Life Technologies.

In addition to his commercial research ventures, Rothberg founded the Rothberg Institute for Childhood Diseases in 2001, a non-profit organization dedicated to finding a cure for Tuberous Sclerosis Complex (TSC). TSC is a genetic disorder that causes benign tumors to form in the brain, eyes, heart, kidney, skin, and lungs. The disease can cause developmental delay, seizures, and renal failure. The institute carries out research at the intersection of molecular biology, chemistry, computer science, and nanotechnology. Their work is expected to have a direct impact on cancer research and may also enhance the understanding and treatment of other childhood disorders. 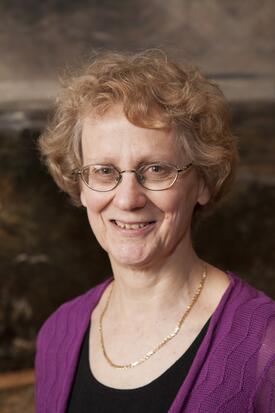 Thomason, the William J. Gedney Collegiate Professor of Linguistics at the University of Michigan-Ann Arbor, is one of the best known and most respected linguists alive today. Her primary research interests are historical linguistics (the ways languages change over time), contact linguistics (the influences that languages have on one another), and Native American languages of the Northwest, but her service to the field goes far beyond that. She has worked with Indian communities in Montana for some 30 years to document language varieties and work with First Nations and Native American communities on language revitalization and classroom support for language teaching. The Salish languages she studies are highly endangered and at risk of dying out altogether, if not transmitted to the next generation.

Thomason has been a pioneer in the development of contact linguistics. Her book, Language Contact, Creolization, and Genetic Linguistics (with Terence Kaufman, 1989) is the standard reference work in this area and has provided a coherent theoretical framework within which to analyze contacts among different languages and how they impact one another. She has made major contributions to the field of genetic linguistics (language classification) and to the study of pidgins and creoles. She was invited to serve on the advisory board of the Max Planck Institute for Evolutionary Anthropology, where some of the most significant current research in historical linguistics is centered.

From 1988 to 1994, Thomason was editor of the journal Language, the most prestigious linguistics journal in the U.S.  She has served as president of the Linguistic Society of America – the largest association of linguists worldwide, and of the Society for the Study of the Indigenous Languages of the Americas. In 2010 she was elected a Fellow of the American Association for the Advancement of Science, having served as chair of the AAAS Section on Linguistics and Language Sciences. She has been invited to speak and teach at institutions and conferences around the world, from Finland to Brazil, from Poland to Australia, and has helped promote the field of linguistics to the public by contributing to a PBS Nova program, “In Search of the First Language.”