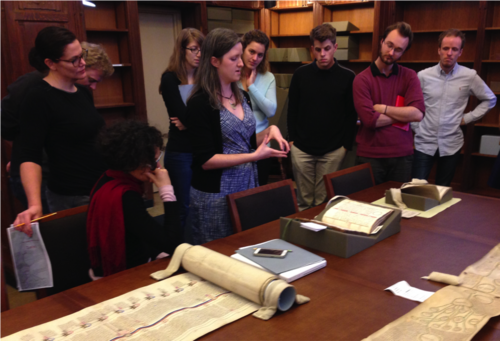 A new workshop series in digital editing was launched in December by Yale graduate students. Recognizing the need for graduate training in digital humanities, Anya Adair (English), Katherine Hindley (Medieval Studies), and Joseph Stadolnik (English and Medieval Studies) developed a plan to combine digital tools and text encoding with the study of manuscripts.

Supported by curator Ray Clemens at the Beinecke Rare Book & Manuscript Library, and with assistance from the Yale Digital Humanities Lab, the program’s teaching is firmly project-based: each workshop is organized around the digitization of a manuscript roll from Yale’s collections. “The roll is a great medium for teaching encoding,” says Adair, “not just because these are understudied manuscript artifacts in their own right, but because their format poses real difficulties for textual editing. They demonstrate both the potential and the challenges of digital tools.”

The pilot workshop, a two-day intensive taught by Adair, Hindley, and Stadolnik, took fourteen participants from seven departments through the process of cataloging and transcribing a manuscript, as well as training them in XML and the Text Encoding Initiative. The final product will be an online edition of the roll text with linked digital facsimile.

The workshop’s peer teaching model allows Yale’s graduate students to share their expertise in paleography, codicology and ancient languages, and in digital textual studies. A guest lecture was also provided by Postdoctoral Associate Dr. Carol Chiodo. “Though we hope in the future to bring in experts to help with advanced coding,” says Adair, “there’s such depth of knowledge among the graduate students that it makes sense for this series to be peer led.”

Adair and Hindley, with collaborators from the University of Connecticut and the University of Toronto, recently won a Medieval Academy of America support grant that will allow them to extend the series beyond Yale. Their project is titled “English Manuscript Rolls 1200-1600: A Collaborative Digitization,” and will run its first workshop in March next year.

The organizers hope the series will become a standard offering, and plan to move beyond rolls to other manuscript items in the collections at Yale.