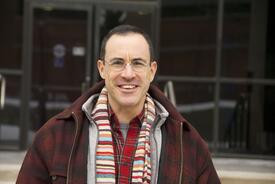 Gregg Gonsalves (Epidemiology of Microbial Diseases) was 45 years old in 2008, when he came to Yale to earn his undergraduate degree. He was working in Cape Town, South Africa, for a health and human rights organization and was wondering what project to tackle next, when he stumbled upon Yale’s Eli Whitney Program for Nontraditional Students. He applied. He was admitted. And when he won the inaugural John M. Lloyd Foundation Leadership Award honoring his two decades of advocating for people with AIDS, his decision was made. With financial assistance from Yale and an unrestricted grant of $100,000 from the Lloyd Foundation, he could go back to school and finish his bachelor’s degree.

Three years later, at the age of 48, Gregg enrolled at the Graduate School for a PhD. Now he is not only a graduate student, but also a founding co-director of the Yale Law School/Yale School of Public Health Global Health Justice Partnership, as well as a lecturer at the Law School. He co-teaches a course with law professor Amy Kapczynski and public health professor Ali Miller. The course, the Global Health Justice Practicum, matches students with outside organizations to work on projects that straddle public policy, human rights, and medicine. In essence, Gregg is teaching others how to carry on the work to which he has devoted his life.

Like most teenagers, Gregg went to college right after high school. He studied Russian and English literature at Tufts, but dropped out after his second year. Several years later, his life changed dramatically.

“I was hanging out, waiting tables in Boston, and met a guy,” he recalls. “After a month, he came over drunk and crying one night and announced that he was HIV+. I told him it would be OK, though I knew nothing about HIV and had never met anyone with HIV before. I then went looking for information, to find out what treatments there were, what the research said, etc.”

In the search for answers, Gregg ended up joining ACT UP (the AIDS Coalition to Unleash Power), first at its chapter in Boston and later in New York. That’s where he began the journey he is still on.

“Nothing will ever surpass the experience I’ve had working on the AIDS epidemic — with ACT UP NY, the Treatment Action Group, and Gay Men’s Health Crisis in NYC, and with the AIDS and Rights Alliance for Southern Africa and the Treatment Action Campaign in South Africa,” he says. “Despite the toll of death and grief, it was an honor to be able to work with such wonderful, brilliant, passionate people: activists, scientists, and clinicians.”

An Oscar-nominated film, How To Survive a Plague, documents what Gregg and his colleagues did in the late 80s and early 90s, when AIDS was still widely misunderstood, feared, and untreatable. Gregg’s early efforts were also reported in Steven Epstein’s book, Impure Science: AIDS, Activism, and the Politics of Knowledge.

“Remember, our government didn’t respond to the epidemic at the requisite scale for many years, so the response to the AIDS crisis had to come from the communities themselves,” he says. “We also had to take to the streets, to the NIH, the FDA, to the White House to force them to act. The AIDS epidemic in the US is still terrible — 50,000 new infections each year and 15,000 deaths — but it would be a lot worse without the efforts of ordinary people living with the disease and their friends and families who stepped up when our leaders failed to do so.”

In 1993, Gregg co-founded the Treatment Action Group, the first national organization focused solely on US biomedical research policy on HIV, tuberculosis, and hepatitis C.  In 2000, he became policy director for AIDS research, treatment, and prevention at the Gay Men’s Health Crisis, the world’s largest and oldest AIDS service organization. In 2003, Gregg founded the International Treatment Preparedness Coalition, which now has more than 1,000 members in over 125 countries advocating for AIDS and tuberculosis treatment. In 2006, he joined the AIDS and Rights Alliance for Southern Africa in Cape Town, where he coordinated regional programs to educate communities about AIDS and TB. And then he won the Lloyd Foundation award and came to Yale.

As an undergraduate, Gregg majored in Ecology and Evolutionary Biology and focused on the interaction between the immune system and pathogens.

“My advisor Stephen Stearns and Professor Paul Turner were tremendous influences on me at Yale College,” he says. “They lit the fire for me on evolutionary biology and its potential to answer questions about infectious disease. Towards the end of my undergraduate years, I told my advisor that I was hooked. I really loved science and wanted to continue. He suggested going to Europe to get a PhD, as I could start research without having to do preliminary course work there. I ended up applying to work with a PI at Oxford doing HIV immunology and another researcher at the Institut Pasteur who was working on SIV (HIV’s cousin) in monkeys.”

Gregg was accepted into both programs and was preparing to move to France, when two Yale professors urged him to consider staying in New Haven.

“Gerald Friedland (whom I’ve known for a very long time, since he’s an AIDS researcher and clinician) and Albert Ko, who runs the division within the Yale School of Public Health where I am now studying, asked me if I was sure I wanted to devote myself to laboratory science, considering my experience in science policy, human rights, and global health.”

Friedland and Ko suggested setting up a center to focus on social medicine at the School of Public Health (YSPH) where Gregg could work on the issues he cared about while pursuing his PhD at Yale. His friends Amy Kapcyznski and Ali Miller were visiting faculty at the Law School that year. (Kapcyznski is now an associate professor at Yale). Both had worked in AIDS activism, human rights, and social justice and “were thrilled with the idea.” They suggested a partnership between the schools of law and public health. The two deans, Robert Post and Paul Cleary, approved enthusiastically, and the Global Health Justice Partnership (GHJP) [www.yaleghjp.org] came into being, with Gonsalves and Miller as co-directors and Kapcyznski as faculty director. A year after graduating from Yale College, Gregg was accepted into a PhD program to study the epidemiology of microbial diseases at the YSPH. The GHJP and Gregg’s PhD studies were launched at the same time.

Gregg is now working on a dissertation project titled “Optimizing the Use of Resources for HIV/AIDS in the United States.” In it, he is using quantitative methods to improve health programs worldwide, with an emphasis on AIDS and other infectious diseases. His committee includes Dean Cleary and School of Public Health Professors David Paltiel and Forrest Crawford, as well as School of Management Professor Edward Kaplan.

Gregg has garnered many awards, fellowships, and honors over the years. Most recently, he won an honorable mention in the Lasker Foundation’s 2014 Essay Contest Supporting Medical Education for “The Whitecoats Are Coming!” [link to http://www.laskerfoundation.org/programs/essay2014_hm.htm] In the essay, he recommends creating “a new, annual national day of advocacy” to increase funding for biomedical research by bringing together scientists and their elected representatives and senators.

Among other honors, he received a one-year, $150,000 Open Society Foundations fellowship in 2011 to study HIV, TB, and maternal and child health programs in Ukraine, South Africa, and Brazil. He was a fellow in the Department of Global Health and Social Medicine at Harvard Medical School, where he focused on public policy issues related to multi-drug resistant TB in developing countries, and he held a summer research internship at the Institut Pasteur in Paris. He has served on committees devoted to public health funded by the Bill and Melinda Gates Foundation, the National Institutes of Health, and the World Health Organization, among others.

“I’ve had a successful career in global health,” he says. “The joy of science — actually doing it — is a privilege that I never thought I'd receive, particularly this late in life,” he says. “I am confident I'll be able to use my new skills once I graduate, whether I employ them in a traditional academic setting or in the field, with an non-governmental organization (NGO) or private research institution.”