Mayesha Alam (Political Science) and Lorenzo Rakesh Sewanan (MD/PhD, Biomedical Engineering) have been awarded Paul & Daisy Soros Fellowships for New Americans. These are given annually to 30 outstanding immigrants and children of immigrants to enable them pursue post-undergraduate degrees. Selected from 1,775 applicants across the country, each of the recipients was chosen for his or her potential to make a significant contribution to American society, culture, or research. Each will receive up to $90,000 in funding for the graduate program of their choice. In addition to the two PhD candidates, seven students in Yale’s professional schools have won Soros Fellowships this year. 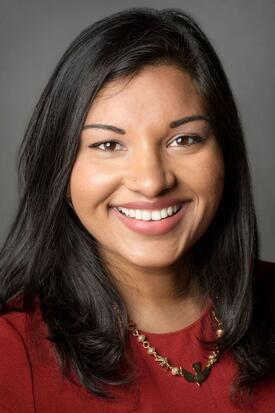 Born in Bangladesh, Alam moved with her family to Jakarta when she was a child. They lived under the repressive Suharto regime and witnessed Indonesia’s volatile transition to democracy, which shaped her worldview and solidified her interest in politics and diplomacy. She earned a bachelor’s degree from Mount Holyoke College and then a master’s degree from Georgetown University, both in international relations. She co-founded the Georgetown Institute for Women, Peace and Security and served as its assistant director for five years. Before coming to Yale, Alam also worked with the United Nations, the World Bank, and the Organization for Security and Co-operation in Europe on a range of international peace and security issues. She volunteered as a policy adviser to the Hillary for America campaign.

Alam’s book, Women and Transitional Justice: Progress and Persistent Challenges in Retributive and Restorative Processes (Palgrave Macmillan, 2014), was inspired by her work at the Truth, Justice and Reconciliation Commission of Kenya and by her parents’ experiences surviving the 1971 Bangladesh Liberation War. In the book, she analyzes the experiences women endured during war and violent political upheaval, using case studies from Africa and India.

Now finishing her first year in the PhD program at Yale, Alam plans to write a dissertation on civil war termination and post-war reconstruction. She aspires to be a scholar and stateswoman who bridges theory and practice related to conflict resolution and peace-building. When not busy with academics, Alam spends her time advocating for the rights of women and girls worldwide and volunteering with a refugee family in New Haven. 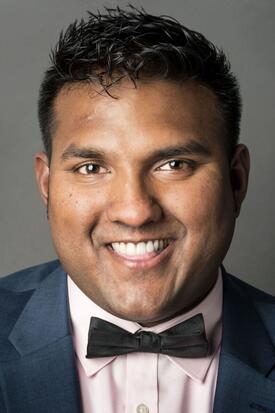 Sewanan was born in Suriname to Indo-Caribbean parents who migrated there in the 1970s from Guyana to escape the economic and political unrest of the Socialist regime. He spent his first sixteen years in the former Dutch colony before moving to the United States with his family. He attended Trinity College as a QuestBridge College Match Scholar, majoring in physics and mechanical engineering with a minor in writing and rhetoric. QuestBridge provides full four-year scholarships to high-achieving, low-income high school seniors.

Sewanan studied abroad in Australia and Asia while at Trinity College and conducted research on electric fish neuroethology (the study of animal behavior and its underlying mechanistic control by the nervous system). He also engaged in public service and educational outreach in the Hartford community. His research on intervertebral disk biomechanics in the lab of Nadeen Chahine, director of the Bioengineering-Biomechanics Laboratory at the Feinstein Institute for Medical Research, won him a Barry Goldwater Scholarship — a highly competitive award established by Congress to honor outstanding college students in the natural sciences, engineering, and mathematics.

Sewanan’s research at Yale, advised by Stuart Campbell, combines tissue engineering, molecular mechanics, and computational modeling to understand the biomechanics and mechanobiology of inherited diseases of the heart muscle.  Once he has completed his MD and PhD degrees, he plans to practice cardiology as a physician-scientist and pursue patient advocacy.

Away from the lab, he co-founded Students for a Better Healthcare System, which mobilized medical students and others to educate hundreds of people in the New Haven community about health care reform. He also co-founded the Primary Care Patient Navigation Program, based at the Yale Primary Care centers. This innovative effort partners medical students with attending physicians or chief residents to work with patients whose health outcomes are adversely impacted by social barriers to care. The program not only helps the patients, it also educates the medical students about these increasingly important issues in health care access. In addition, Sewanan is a published poet.