Yale alumna Kathleen McCartney (PhD 1982, Psychology) will be the eleventh president of Smith College on July 1, replacing another Yale alumna, Carol T. Christ (PhD 1970, English), who has headed the college since 2002. McCartney is currently Dean of Harvard’s Graduate School of Education and the Gerald S. Lesser Professor in Early Childhood Development. 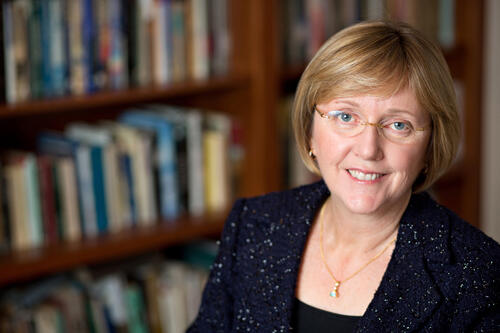 An internationally recognized authority on child development and early education, McCartney has been on the faculty of Harvard’s Graduate School of Education for thirteen years, the last seven at its head. But she never planned to be an academic administrator.

“I sometimes joke that I’m an accidental dean,” McCartney says. “I was asked to be acting dean of the Harvard Graduate School of Education when the dean stepped down, and I expected to do it for one year and then go on sabbatical.” She was surprised to find it “very rewarding work. It gives you the opportunity to do institution-building, to take a school in different directions, and to help it evolve.” During that year, then-Harvard President Larry Summers asked every dean to write an academic plan for the future of their school. In the course of drawing up a plan for the Graduate School of Education, she discovered that she wanted to be the one to carry it out.

“What started as a purely academic exercise turned out to be a road map for me,” she says. “There’s a lot of serendipity in everyone’s career, and this was a happy example of one for me.”

McCartney assumed she would spend her life as a faculty member. After completing her PhD, she became an assistant professor of psychology at Harvard and five years later accepted a position at the University of New Hampshire, where she was professor of psychology and family studies and director of a laboratory school for children from birth through kindergarten.

She then returned to Harvard, joining the faculty of the Graduate School of Education in 2000. She was named its dean in 2006. Under her leadership, the school expanded its faculty by twenty-five percent, launched a new doctoral program in educational leadership and an interdisciplinary, research-focused PhD program, and raised more than $162 million in philanthropic support. McCartney “increased student aid, deepened the School’s connections with other parts of the University, and elevated its impact on the world of education far beyond Harvard,” according to Harvard President Drew Faust.

As a Yale graduate student, McCartney was a fellow at the Bush Center in Child Development and Social Policy. One of her classmates was Provost Peter Salovey, who will be Yale’s next president. Her dissertation focused on the effect of day care on children’s language development and was advised by Sandra Scarr, who left Yale in 1983 to join the faculty of the University of Virginia.

“She couldn't have been a better mentor,” says McCartney. “Sandra and I used to write papers side by side, in front of her word processor. Through this kind of extraordinary mentorship, I learned how to construct an argument, how to describe research findings, and how to think. This is a tradition I continued with many of my own doctoral students.

“I was also privileged to work with Ed Zigler, Tom Berndt, and Katherine Nelson. I learned something different from each one. From Ed, I learned how to connect research with policy. From Tom, I learned how to design a study. From Katherine, I learned how theory guides a research question. After colloquia, the faculty would sponsor pot luck dinners in their homes. The dinner discussions were better than most of my classes!”

McCartney is a founding board member of edX, a nonprofit educational consortium created by Harvard and MIT that offers free online courses and investigates technologies for improving both distance learning and campus-based education. She is a trustee of Tufts University, where she earned her undergraduate degree. A prolific scholar, she has published more than 150 articles and chapters and is co-editor of Experience and Development (2009), The Handbook of Early Childhood Development (2006), and Best Practices in Quantitative Methods for Developmentalists (2006), among other works. She was inducted into the American Academy of Arts and Sciences in 2012 and is a fellow of the American Educational Research Association, the American Psychological Association, and the American Psychological Society.

This summer, McCartney and her husband, William Hagen, will move into the Smith College President’s House, which overlooks Paradise Pond, right in the middle of the campus. “You couldn’t want better than that!” she laughs. Hagen is retiring from his position as a high school English teacher to become “First Gentleman of Smith.” Their children are Kaitlin, an ad agency associate creative director; Kimberly, a student at Northeastern University Law School; Pres, a math teacher at the Canterbury School in New Milford, Connecticut; and Sam, who works at the University of Washington to support his passion for theater.