Josebe Bilbao-Henry (PhD 1999, Philosophy) serves as the program manager for Language and Culture at the World Bank, a global non-profit resource that provides financial and technical assistance to developing nations. The organization employs more than 12,000 people from close to 170 different countries. 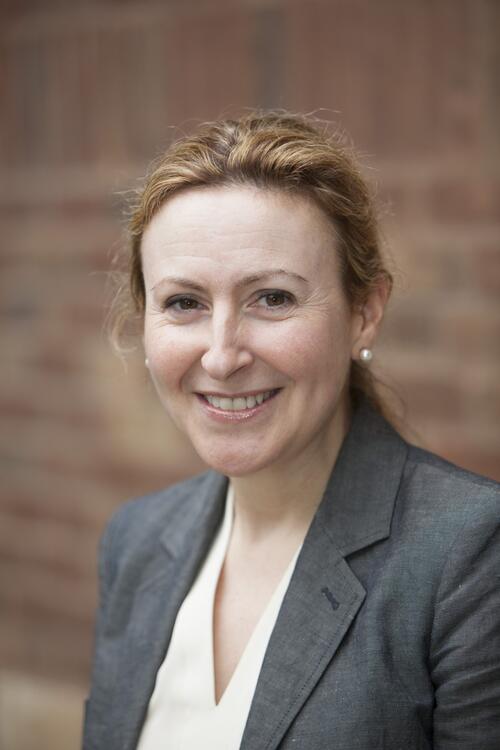 Two-thirds of the staff are based in Washington, D.C., where Bilbao-Henry’s office is located. The remaining third work in the field. The World Bank’s economists, educators, environmental scientists, financial analysts, managers, foresters, agronomists, engineers, information technology specialists, and social scientists all need to be able to work with diverse teams in international settings, and her job is to enable them to navigate those unfamiliar waters.

“People working here need good skills to function in different cultures in order to avoid cacophony,” says Bilbao-Henry. Her department designs and delivers workshops and modules that teach language and intercultural competence, primarily in Arabic, Chinese, French, Portuguese, Russian, and Spanish. Her role is to manage all the programs, both those offered on site in Washington and those given remotely.

Having a PhD in philosophy from Yale is a major asset in her current position. “It helps you frame questions, think through problems, and work your way through alternative arguments.” Research helps you “see other perspectives,” she says, and “writing a dissertation builds character. The process of working with and changing advisers and reshaping your topic trains you to work in complex organizations and work with multiple stake-holders.” Furthermore, a great many of her colleagues have graduate degrees. It’s all but expected at an institution like the World Bank, she says.

Bilbao-Henry joined the World Bank about four years ago, after teaching Spanish language and culture at George Washington University for fifteen years. At GW, she designed courses that taught critical thinking skills through the study of Spanish culture as well as business Spanish. She became director of Spanish studies at a small school, Language One (now defunct), for professionals who needed to master a foreign language and culture to advance in their work.

Born outside Bilbao, in the Basque region of northern Spain, she grew up speaking both Spanish and Basque. Her father was a native Basque speaker; her mother’s first language was Spanish. At Deusto University in Bilbao, she completed a five-year program comparable to an undergraduate and master’s degree, majoring in philosophy. Wanting to go deeper into the subject and expand her knowledge, she applied to graduate schools in the U.S., where the doctoral programs had more structure than those in Europe.

At Yale, she wrote a dissertation, advised by Irad Kimhi (now at the University of Chicago), on language about painting and aesthetic experience, with a focus on art forgery. “I have a keen interest in the concept of forgery in art,” she says. “Forgery helps us see how esthetic experience is structured and explained. The world of art sets the standards for authenticity and defines ‘forgery’ in different ways. Forgery creates a complex set of philosophical problems.”

As a graduate student at Yale, she explored interests beyond philosophy, including non-native language study. She took a course at the Law School and her final project was on structuring a leveraged buyout of Sotheby’s art auction house. She taught in the Spanish & Portuguese Department, practiced piano at the Music School, played duets every week with a violinist friend, and discovered running and working out. “The idea that graduate school encompasses every aspect of your life was new to me,” she says. “In Europe, the experience is more compartmentalized. In contrast, Yale was, and still is, a place where lateral thinking is encouraged, nurtured, and celebrated.”

Bilbao-Henry is active in the Graduate School Alumni Association (GSAA), where she is a member of the board, heading the GSAA’s Regional Outreach Projects and chairing the Strategic Initiatives Committee. She has organized Yale Day of Service sites in the Washington, D.C. area, served on the nominating committee and the Wilbur Cross Medal committee, and spoken about her career to graduate students in October 2012 and at “Where Do I Go From Yale?” last May. Her involvement began in 2008, when she attended the reunion of the Philosophy Department. “That gathering and the time I spent back on campus reminded me of the scholarship, the exchange of ideas, and the intellectual exploration that were constants in my life as a graduate student.”

Bilbao-Henry lives in Washington with her husband Jorge Bueno, a lawyer and management consultant. When not working or reading, she can be found in a trout stream.