How Does an Embryo’s DNA Take Control of Development?

Ashley Bonneau (Genetics) is figuring out how a fertilized egg develops into a complex organism. 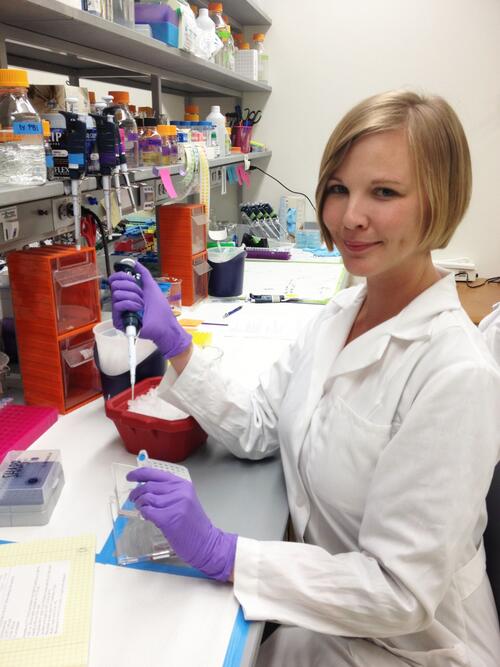 “We know that the embryo itself has little or no control during the beginning steps of development,” she says. “We know that the maternal products from the egg set the initial instructions for development and that this is only temporary. At some point the embryo takes control. How does that happen? If you think of a row of dominos, all it takes is the first one falling to propagate a tumbling cascade. We are interested in finding which maternal products push the first domino and turn on the embryo’s control of development.”

Working with zebrafish in Antonio Giraldez’s lab, she uses molecular and genomic techniques to identify factors important in early development. “One of the main methods we use is DNA and RNA high-throughput sequencing,” she says. Zebrafish are ideal subjects, she explains, “because the embryos are transparent and development can be directly observed with a microscope; females lay hundreds of eggs at weekly intervals; and embryonic development proceeds rapidly, so we can do many experiments in a relatively short period. Most importantly, many of the same genes involved in human development are conserved in zebrafish, so we can draw parallels between the two species.”

Everything happens quickly with zebrafish. Going from egg-controlled to embryo-controlled development only takes about three hours or approximately ten cell divisions after fertilization. It’s relatively easy to spot the shift in control, because “If the embryo does not take control, it halts development and fails to progress past a ball of cells sitting on the yolk sac.” When the embryo takes over, “the cells will begin to rearrange themselves and move to create the different types of cell layers needed to make the organism.”

Ashley and her colleagues recently found that three transcription factors, specifically Nanog, Pou5f1 (also called Oct4), and SoxB1, play a crucial role in this process. Transcription factors are proteins that regulate gene activity and are critically involved with the replication of undifferentiated embryonic stem cells. “These three factors are highly active in the early embryo, and when we inhibited their function, development stopped completely,” Ashley says. The impaired cells failed to read their own genetic instructions and remained immature. “Interestingly, these factors are the same ones that were shown to turn adult cells into embryonic-like cells by Shinya Yamanaka, which garnered him a share of the Nobel Prize in 2012.”

The discoveries Ashley and the Giraldez team made were reported in the Nature in September. At the 2013 European Zebrafish Meeting held in Barcelona, Spain, she was given a best poster award for the research published in Nature.

Ashley didn’t plan to be a molecular biologist. After finishing high school in Phoenix, Arizona, she moved to Southern California. Although she graduated with honors and had scholarship opportunities, she was unsure what she wanted to study.

“I had always loved science and initially had hopes of becoming an archaeologist. After moving to California, I spent the next few years trying to decide if that was really the direction I wanted to take. I worked in the mortgage industry in the interim.”

When she enrolled at California State University Channel Islands at the age of 25, she planned to be a doctor, but she “fell in love with research and decided to apply to graduate programs instead of medical school,” she says. She was inspired and encouraged by a biology professor, Nitika Parmer, who directed Ashley’s independent research in her very first semester. She continued to work with Professor Parmer on the effects of gene silencing on the growth of human cells, and in her senior year, won the Thematic Best Poster Award from the American Society for Biochemistry and Molecular Biology. Her presentation, “Double knockdown of the Rheb gene in mammalian cells using RNA interference,” was chosen from a field of more than 1,000 posters.

By the time she came to Yale, Ashley knew she wanted to study developmental biology. She joined the Giraldez lab, which “has provided a truly excellent environment to study the genetics of early development,” she says. Ashley was named a Gruber Science Fellow in 2011, the inaugural year of the fellowships.

Outside the lab, she and her husband Daniel like to explore New England’s towns and go antiquing. Daniel is an audio engineer and mixes the sound for live concerts and sporting events. She met him at a concert in Phoenix when she was nineteen. “He is much cooler than I am,” she insists. They live in Killingworth with their cats, Kat and Monkey.