How to Earn a PhD: Perform Puppet Shows 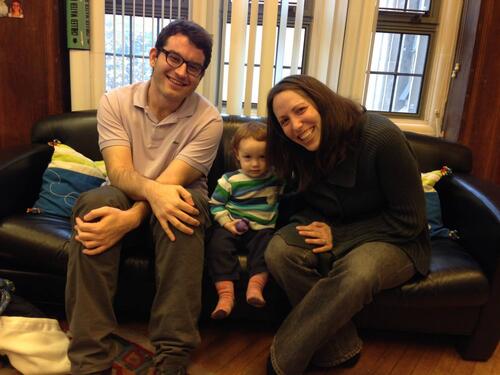 Do babies see the difference between kind and unkind behavior? Do they prefer nice people over mean ones? Do they make ethical judgments? And how can anyone know what babies are thinking, when they are too young to talk? Arber Tasimi (Psychology) and colleagues have found ingenious ways to answer questions like these.

One approach is a morality play disguised as a puppet show. In the Infant Cognition Center at Yale, Arber presents the puppet show to his tiny test subjects and watches their reaction.

Act One. A puppet appears onstage and struggles to open a clear box that has a toy inside. After several failed attempts, a second puppet arrives and helps open the box.

Act Two. The same puppet struggles to open the same box, but this time a different puppet intervenes and slams it shut.

Watching the puppets from the safety of its mother or father’s lap is a baby, between twelve and thirteen months old. In this study, which Arber started during his first few weeks of graduate study at Yale, the helpful puppet then offers the baby one cracker while the unhelpful puppet offers the baby two crackers.

“Rationally, babies should take the two crackers –– they're disinterested third-party observers of this puppet show, so they should ignore the puppets’ actions toward others and prioritize their self-interests,” Arber says. “But babies care; indeed, over 80 percent are willing to incur a cost (i.e., take the one cracker from the ‘good guy’).”

The impulse to prefer the helper to the hinderer is not absolute, he found. “The difference between the two offerings mattered. When the wrongdoer’s offering was sufficiently greater than the do-gooder’s (eight crackers to one), babies were willing to ‘deal with the devil.’ Our earliest social decisions, it seems, are based upon a cost-benefit analysis that weighs competing considerations, not upon simplistic absolutes.”

This research was featured in the cover story of Smithsonian Magazine [http://www.smithsonianmag.com/science-nature/are-babies-born-good-165443013/#9COsXgzivSY6QCRT.99], and Arber’s work was covered in Anderson Cooper 360, in the “Baby Brains” series last year.

In general, Arber studies “how infants, children, and adults act upon — and make sense of — the everyday social world.” Right now a lot of his research focuses on “the peaks and perils of generosity,” he says. Questions that he is currently exploring include: How can we motivate children to behave more generously? Can generosity be a bad thing?

Can generosity ever be bad? Consider the following phenomenon: Our judgments of others are colored by how those others make us feel about ourselves. Arber has found that “school-aged children strongly preferred a generous to a stingy individual. Importantly, this preference was significantly reduced in a situation that afforded children a comparison of their own (lesser) generosity to that of another child (but not an adult). These findings suggest that by middle childhood, coming up short in a comparison with a peer can decrease one’s liking for an individual who does good.”

Arber’s research is advised by Karen Wynn. Also on his committee are Marcia Johnson, Paul Bloom, and Susan Gelman, professor of developmental psychologist at the University of Michigan. He credits Kiley Hamlin, a former Yale graduate student (PhD, 2010), along with Professors Wynn and Bloom, for being the first to document that infants prefer “good guys” to “bad guys.” At three months old, babies don't yet prefer a “good guy” to a “neutral guy,” but they already prefer a “neutral guy” to a “bad guy,” suggesting that, “even at the very beginning of life, there's a strong aversion to those who act badly toward others,” Arber says.

Arber was born and raised in Waterbury, Connecticut. He still spends the occasional weekend serving tables at his parents' restaurant, which is located a few towns over from New Haven. He originally expected to study actuarial science. “I love mathematics –– I was the guy that carried around two TI-83 calculators in high school. But, after taking an introductory psychology course, I was hooked. In particular, I thought it was fascinating that I could spend my days asking whatever questions I wanted about human behavior, which led me to the study of development. Specifically, I remember thinking that if I really wanted to study the mind, then I should try to understand what it's like prior to the extensive influences of language, learning, and culture.”

He graduated from the University of Pennsylvania in 2011 and started graduate school at Yale that same year. At this point, his life is “mostly just doing science, which I love.” And, he adds, “I love going to coffee shops –– especially Koffee on Audubon –– and I have recently been addicted to cycling classes, thanks to a wonderful and enthusiastic instructor, Debbie Nesdale.”