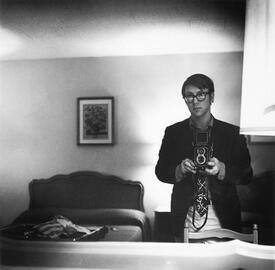 Raymond Smith (MA 1966; MPhil 1968, American Studies) has been known among bibliophiles since 1975 as the proprietor of R.W. Smith Bookseller, specializing in rare and out-of-print art books. Recently he produced an art book of his own: In Time We Shall Know Ourselves.

The book contains 52 black and white photographs taken on a three-month road trip in the summer of 1974, with essays on the photographs by two leading scholars. Smith and an Australian friend had set out to drive across the United States with the intention of creating a visual record of American society as the basis for a book.

“I wanted to present American culture through photography, so that the photograph was the ultimate expression rather than … an illustration to history,” he says.

His friend’s VW gave out in Kansas City after six weeks of traveling in the South, and he returned to New Haven by train. Soon after his return, he resumed traveling for an additional eight weeks while employed as an ID card photographer for a New Haven firm, photographing for himself between assignments and during lunch breaks. By the end of the summer he had taken nearly 750 exposures, but the book didn’t happen. Until now. 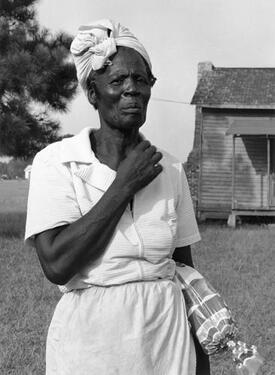 In Time We Shall Know Ourselves was published in 2014 in conjunction with an exhibition of Smith’s photographs organized by the Montgomery Museum of FineArts in Alabama, which has since traveled to the Hickory Museum of Art in North Carolina, and most recently, the Museum of Contemporary Art in Jacksonville, Florida. The exhibit will be on view at the Georgia Museum of Art in Athens, Georgia, from October 25 through January 3, 2016. Two articles in conjunction with the exhibition are forthcoming, one in The Stetson Magazine (Smith’s undergraduate degree is from Stetson University) and the other in Atlanta Magazine’s special “Atlanta Celebrates Photography” issue.

The photos, mostly portraits of ordinary people doing ordinary things, evoke the American experience in the last days of the Nixon administration. They “document a transitional historical moment in a quiet and non-programmatic way,” says Richard H. King, professor emeritus of American Intellectual History at the University of Nottingham. “It is not class or race, geography, or history but the fact of making oneself present in the world, of being seen, that is the outstanding fact about them.” King and others liken Smith’s work to the photos of Walker Evans, who was his photography mentor at Yale, and to the powerful Great Depression pictures of Eudora Welty and Dorothea Lange, and the work of Robert Frank in the 1950's.  “Traveling far and wide, Smith sought out his subjects in a way reminiscent of Evans and Frank,” writes Alexander Nemerov, Carl and Marilynn Thoma Provostial Professor in the Arts and Humanities, Stanford University. “But neither of these associations touches the deepest energy of Smith’s photographs.” 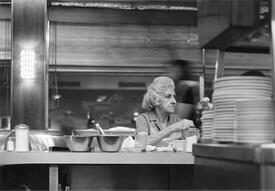 The photographs for In Time We Shall Know Ourselves are followed by two critical essays by Yale Graduate School alumni. “Mirror with a Memory” is by Richard H. King (MA 1967, American Studies), and “First and Last: The Sequence of In Time We Shall Know Ourselves” is by Alexander Nemerov (PhD 1992, History of Art). Smith’s “Retrospect” closes the volume with his reflections on that road trip viewed from a distance of 40 years.

In Time We Shall Know Ourselves is available from the publisher, Peter Hastings Falk, at peterfalk@comcast.net or directly from the photographer at rwsmithbooks@att.net