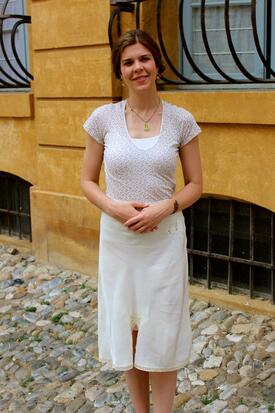 Elisabeth Becker (Sociology) is studying Muslim communities in London and Berlin, where she is currently doing research. Her dissertation will be an in-depth ethnographic study, and, to accomplish it, she has immersed herself in the life of the mosques, “entering into, engaging with, living life within these communities,” she says. She also aims “to demonstrate through scientific work that Muslims are agents in their fate, rather than simply objects to be studied from the outside.”

She has attended religious and social events, participated in prayers, Ramadan, burials, weddings, academic presentations, and mosque tours: “anything that happens at, or in conjunction with, my research sites,” she says. She has “been able to access these communities easily and participate in everything. I have interacted with everyone at the mosque, from leadership to regular attendants to visitors here in Berlin. Something I particularly love is that the mosques are always open to children, running, participating in prayers, playing, and just adding life to everything.”

“It is important (now more than ever) to emphasize the diversity of Islam, and to move away from focusing on stereotypical topics in relation to this faith (e.g. terrorism). One of the most difficult experiences for me in doing this research has been in constantly coming up against prejudicial views and stereotypes from outsiders — people who claim that certain views are held, that women are treated in a certain way, etc., without actually interacting with Muslims.” She places some of the blame on the media’s tendency to focus only on sensational news.

At the mosques she studies, “gender separation really varies — from a little to a lot. At Sehitlik, in Berlin, there is a women’s room, but women also participate and pray in the main mosque room; it gives them a private space to pray, nurse, and so on. In East London, women now have their own separate buildings. Some of the gender issues are very real, but not in the sense that women don’t have agency: most of the Turkish families I know here are definitely matriarchal, to put it mildly. Women grapple with a variety of identities, including the religious one. I see young women struggle to figure out how they want to participate in the Muslim community, while being very different from their immigrant parents. This can mean anything from wearing a head scarf (or not) to going to prayers (or not). One important thing to keep in mind is that Islam stresses the direct relationship between the individual and Allah, so it's really up to the individual to find his/her own path.”

Although Becker speaks German, language can still be a challenge, “because the community operates in a combination of Turkish and German, and my Turkish isn't great — but it has vastly improved through this experience!”

She didn’t begin to study Islam until arriving at Yale. Since then, she has received “incredible encouragement and support” from her adviser, Jeffrey Alexander, she says.

Through her work, she hopes to create “alternative narratives about Islam,” going beyond stereotypes, beyond terrorism, to include “the realities sidelined or forgotten, and those that we have failed even to try to know.” She cites Edward Said (1935-2003, Palestinian-born public intellectual and Columbia University professor), who said, “If ‘Islam’ tells us far less than it ought to, if it covers up more than it covers, where — or rather, how — are we to look for information that encourages neither new dreams of power nor old fears and prejudices?”

Her own family and background are religiously and ethnically diverse: Becker’s mother comes from a Jewish family in the Bronx and her father, from a Southern Baptist one. She grew up in Manhattan’s Morningside Heights, which “played a huge role in developing my interests in migration and diversity. This is a border neighborhood between Harlem and the Upper West Side — two very different worlds within the city. During high school, refugees from the former Yugoslavia settled in my neighborhood and this really opened up the world to me, bringing it right to my doorstep. The diversity of my neighborhood and neighbors, hailing from Kosovo to Mexico, Senegal to Lebanon, motivated me to study sociology. I was lucky to grow up in a community with so much diversity from a very young age. Even in my nursery school, held in Riverside Church (where Martin Luther King, Jr. expressed his opposition to the Vietnam War), diversity was central. We dressed up as dragons for Chinese New Year, constructed menorahs at Hanukkah, and all participated in a huge Christmas pageant, regardless of faith.”

At Cornell, where she earned her undergraduate degree, Becker studied refugees from Kosovo and participated in an initiative to return refugees home. This was her first in-depth experience outside the U.S. and, despite her deep love for New York City, “after this taste of living abroad, I have studied, lived, and worked in over a dozen countries,” she says. “I went to Kosovo for my senior thesis research, and it is there that I got to know a Muslim community well.” While pursuing a master’s degree at Oxford, she focused on “peace and justice movements in Latin America and the agency of refugees in their own resettlement processes.”

Her prior study of refugee resettlement and her ongoing exploration of Islam “linked the current situation in Europe, where Muslims are stigmatized, and my broader interest in studying inclusion/exclusion of specific ethnic or religious populations.”

Becker calls traveling her “biggest passion,” adding, “I’ve been really lucky to have opportunities to travel, work, and live in so many countries. From new foods to new languages, there is nothing I enjoy more than being exposed to new cultures.” When in the U.S., she practices yoga at New Haven's Breathing Room studio and spends time on her sister’s organic farm in Wisconsin. She works as a consultant for international organizations “on issues of inequality (from gender to displacement, ethnicity to health and nutrition),” and chases after her 10-month-old son Sami. Her husband, Ufuk Topkara, is a PhD student in theology in Germany.