The Graduate School’s new dean, Lynn Cooley, has been on the Yale faculty since 1989. She holds an endowed chair – the C.N.H. Long Professorship of Genetics – and is also professor of Cell Biology and Molecular, Cellular, & Developmental Biology.

Her research investigates the cell biology of oogenesis (egg development), taking advantage of the fruit fly model system to discover mechanisms used in animal germline lineages to control cell growth and communication. As director of Yale’s Combined Program in the Biological & Biomedical Sciences (BBS), she launched new programs: one that brings students from eight universities in China to the Graduate School, and another that provides medically oriented training for Ph.D. students. Over the years, she has taught courses, advised students, and served the University in many ways. 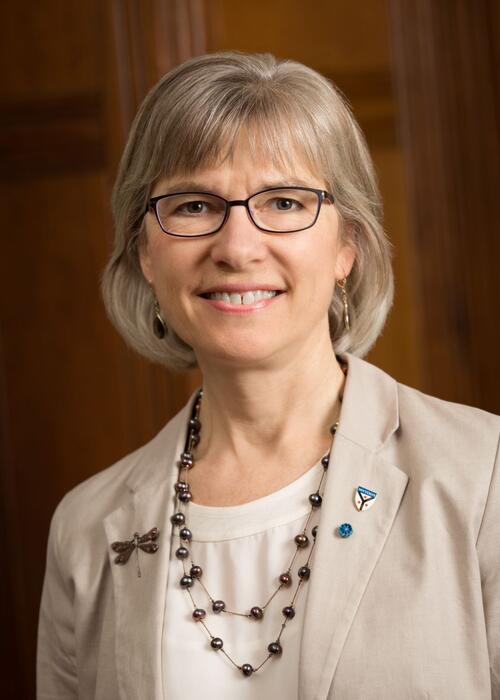 But Dean Cooley’s path to Yale’s faculty wasn't a straight line; she took a few detours before landing where she is now. She finished high school in three years instead of the usual four, because her school in Portland, Connecticut, was so small it had neither AP courses nor varsity sports for girls. Cooley figured out what courses she needed to meet the state requirements, doubled up her program, and left for college a year early. At Connecticut College, she joined the basketball and swimming teams (“I wasn’t very good at either,” she admits), but also discovered modern dance, which she continued to pursue through graduate school and has recently taken up again. She now dances with Annie Sailer, who has a company in New York City and teaches in New Haven.

Cooley planned to be a marine biologist and was pursuing a major in zoology in college, but in her junior year she was no longer certain it was the right path. She decided to leave college for a semester and used the time to gain practical experience and broader perspective. Cooley worked at a veterinary hospital, took two courses at the Marine Biological Laboratories (MBL) in Woods Hole, Massachusetts, and joined a research cruise run by the Woods Hole Oceanographic Institute. She became fascinated by laboratory biochemistry research and redirected her energies into that field. Encouraged by one of her MBL instructors, she enrolled in a Ph.D. program at the University of Texas at Austin.

Then Dean Cooley was almost a graduate school dropout. The UT Ph.D. program didn’t seem like a good fit, and she wasn’t sure where it would lead. She decided to work for a couple of years, first in a lab in Texas and then at Yale, where her boss, Dieter Söll (now the Sterling Professor of Molecular Biophysics & Biochemistry), became her mentor. One day, he announced: “You are going back to graduate school to finish your doctorate.” And with his help, she did.

“My experience in Dieter’s lab and his encouragement set me back on track to complete my Ph.D. and continue pursuing a career in science. He was an excellent mentor who was able to see into my distant future far better than I could at that time,” she says.

When you start up your own lab, you’re at it 24/7. It’s great fun and very exciting, but it’s also hard work. I figured I needed a really compelling hobby or I’d never leave my lab. I decided to learn to fly an airplane.

Cooley then won a Damon Runyon post-doctoral fellowship for training in molecular genetics at the Carnegie Institution for Science, where she developed a new type of mutagenesis screen to identify genes required for oogenesis (egg development). She isolated mutations that cause sterility that she brought with her when she joined the Yale faculty.

“One of the most thrilling days of my life was the day that Charles Radding, the chair of the Search Committee and a super-star in genetics, called from Yale to offer me a job, saying ‘I have good news for you.’ ”

She moved back to Yale and organized her own laboratory to continue studying the development of female gametes (aka eggs), using the fruit fly, Drosophila melanogaster, as a model system.

“Gametes are the ultimate stem cells with the capacity to produce entire new organisms,” Cooley explains. “My lab is focused on two key aspects of egg development: the role of intercellular bridges called ring canals in developing egg chambers, and the regulation of oocyte growth. Cellular mechanisms used to control oocyte development in Drosophila are directly relevant to female fertility in other animals, including humans.”

Running a lab is analogous to running a business, she says, and one of her hopes as dean is to help students learn how to set and manage budgets, apply for grants, publish and present research, deal with personnel issues, manage time, and master a host of other practical skills. 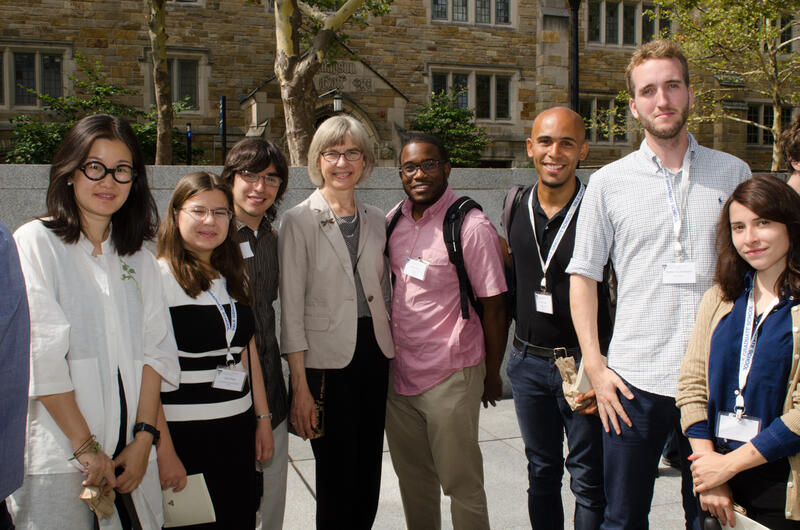 “When you start up your own lab, you’re at it 24/7. It’s great fun and very exciting, but it’s also hard work. I figured I needed a really compelling hobby or I’d never leave my lab. I decided to learn to fly an airplane.”

Cooley signed up with the Yale Aviation Club, which at that time had five single-engine planes at Tweed Airport. In the process of earning her pilot’s license, she met Ted Killiam, who was already a pilot. After a while, she began to fly his plane, and the friendship blossomed into a marriage. Killiam is a lawyer, but with the birth of their children, he became the primary caregiver and homemaker. Eleanor is now 20, a college senior studying environmental engineering. Charlotte, 18, is in her first year of college. The family lives in Guilford, near the Westwoods Land Trust, where Cooley and their two terriers like to walk on weekends.

Now that she is Dean, Cooley plans to maintain an active research program, in addition to her new responsibilities. As Dean, she wants to foster an environment at the Graduate School that encourages students to experience the intellectual freedom and joy of being completely immersed in their chosen discipline, while also preparing for life after graduation.

“Graduate school is a kind of bubble, where you can safely pursue whatever interests you and take it wherever it leads you. But you need to think about and explore career options – plan for a career starting early in graduate school.” That career might turn out to be in academia, and she “can’t imagine a more intellectually stimulating way to spend your career,” but there are many options outside the professoriate, as well. She urges students to follow their instincts and seek mentors and experiences to help them navigate their own career path.