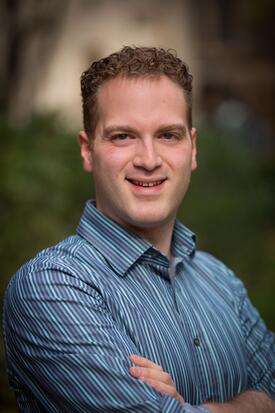 Jason Zentz (Linguistics) studies syntax (sentence structure) and morphology (word structure) in the Bantu language family, which includes some 300-500 languages spoken throughout most of sub-Saharan Africa.

He explains: “In languages like English, these wh-words must appear at the beginning of questions, as in What did you think she bought at the store? Syntacticians generally analyze the wh-word as having moved to the front of the sentence from the position where its answer would appear. In many other languages, such as Chinese, wh-words must appear in exactly that position (You thought she bought what at the store?), which is possible in English only when asking for clarification, expressing surprise, or moderating a game show. Bantu languages allow you to use either of these strategies, and many of them allow the wh-word to appear in other places in the sentence, too.”

Jason’s dissertation investigates the “properties of each of these strategies, both in terms of the hierarchical structure of the sentence and in terms of the ways that verbs and other words change their agreement patterns in each strategy.” He uses data from existing sources to make comparisons across Bantu languages, “but in order to probe relevant theoretical questions that haven’t been previously studied in Bantu, I am also doing a case study on Shona, a Bantu language spoken by about 14 million people in Zimbabwe and Mozambique. I have been conducting interview sessions here in New Haven with Thabani Dhlakama, a Shona-speaking Yale alumna (BS 2013), without whose contributions this research wouldn’t be possible.” He will be working with additional Shona-speaking Yale students in the months ahead.

Shona is an interesting language, both in how it sounds and how it’s structured. It has a “rather unusual class of sounds called ‘whistled’ sibilants,” he says. “There are two versions of the “sh,” “zh,” “ch,” and “j” sounds, one normal and one whistled. Shona also has implosives, which are made by drawing air into the mouth rather than expelling it outward. Like most Bantu languages, Shona is a tonal language; that is, it uses pitch to signal differences in word meaning or grammatical function. Most Bantu languages have an extensive system of noun classes. Whereas European languages might classify nouns using a sex-based gender system, yielding two or three categories (masculine, feminine, neuter), Bantu languages have at least eight grammatical genders, corresponding to categories such as humans, animals, fruits, liquids, paired things, small things, long thin things, abstract concepts, locations, etc. In addition, grammatical number (singular vs. plural) is represented differently across genders, so most Bantu languages have at least fourteen distinct noun classes. The standard variety of Shona has 21.”

Jason’s dissertation is titled “Wh-question Formation Strategies in Bantu” and advised by Robert Frank and Raffaella Zanuttini at Yale, and Richard Kayne (New York University) and Vicki Carstens (Southern Illinois University Carbondale). He plans to defend his dissertation in February.

But before then, in January, he will be honored for an abstract describing this work. “The Composite Derivation of Shona Partial Wh-movement” [http://www.linguisticsociety.org/abstract/composite-derivation-shona-partial-wh-movement] won First Prize in the Linguistics Society of America’s Student Abstract competition. The prize will be presented at the association’s upcoming annual meeting in Portland, Oregon, where he will give a paper based on the abstract.

“In the award-winning abstract, I discuss a wh-question strategy called ‘partial wh-movement.’ A word-for-word translation of a sentence of this type is something like, ‘You thought that it’s what that she bought at the store?’ But it means ‘What do you think she bought at the store?’ I show in the abstract that this word order in Shona has properties that suggest that it is a cross between the English and the Chinese strategies mentioned above, rather than being an independent construction in its own right. In linguistics, we examine documented linguistic variation and develop theories that make predictions about what kinds of structures should be possible or impossible in human language. The Shona pattern I discuss in the abstract has been predicted to be possible, but no one has reported a real case until now, which makes the discovery particularly exciting.”

As a child, Jason lived for a short time in Durban, South Africa, which may be what piqued his interest in African languages. His family moved back to the US when he was nine, and he grew up in south central Pennsylvania. He earned his undergraduate degree from the University of Rochester, with a double major in linguistics and music. While there, he studied voice at the Eastman School of Music, and he has continued to find opportunities to sing during graduate school.

When he’s not making music or studying the syntax and morphology of Shona, Jason works as a technical assistant in the Access Services Department at Sterling Memorial Library, where he participates in a variety of projects, including the development and implementation of ShelfScan, a web-based application that allows library staff to identify cataloging and shelving errors after scanning the barcodes of books on the shelf. He recently co-presented a poster about the project at the Yale Day of Data. At home, he feels “blessed to be supported and encouraged” by his wife Kim and their children: Hudson, 4, Parker, 3, and Olivia, 3.

“Having twins during grad school has been exhausting but rewarding!” he admits.