Journeying into a War Zone to Study the History of Sufism

To observe Sufi Islam in practice, Waleed Ziad (History) traveled to more than forty cities and towns in Pakistan and Afghanistan over the past two summers. 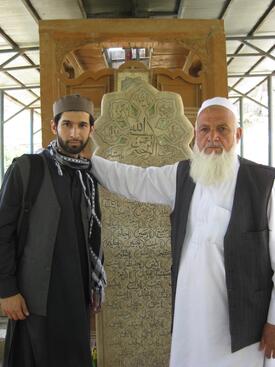 Waleed visited khaniqahs (residential centers for spiritual study), madrasas, and mosques, where he studied the history of Sufism, the mystical dimension of Islam, as it was practiced in the nineteenth century in a region known as the “Persianate world.” While all Muslims seek a pathway to God and hope to become close to God in Paradise, Sufis also believe that it is possible to draw closer to God in this life through asceticism, self-discipline, and whole-hearted devotion.

Naqshbandi Mujaddidi (“revivalist”) Sufi religious networks are at the center of his research. They “influenced some of the largest Muslim movements in the modern era,” he says. “The Mujaddidi reformers, who combined mysticism with studies of jurisprudence and shariah, articulated the major social responses to the decline of Muslim political power, the advent of colonialism, and Great Power politics. My research seeks to address how these crises of the modern period impacted the process of Muslim identity formation and helped shape the current socio-religious landscape of the region.” Abbas Amanat is his adviser.

The places Waleed visited “played a critical role in linking the British and Russian imperial frontiers,” he says. Fieldwork can be dangerous, because the religious orders and institutions he studies “represent the principal ideological threat to pro-Taliban fundamentalist factions, which have been waging a concerted effort against these networks and their mosques, shrines, and popular festivals. That said, the religious scholars and Sufis with whom I engaged were highly supportive of my research.” 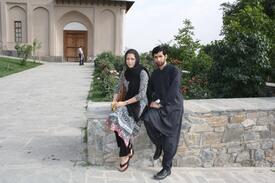 The khaniqahs, generally centered on shrines of Sufi saints, range from impressive complexes once patronized by the Mughal nobility to humble mud-walled structures. Even those in rural or tribal areas often have libraries where scholars draft philosophical and historical publications. Waleed was able to acquire copies of important texts and meet with shaykhs (mystical guides) and scholars.

Many of the khaniqahs host musical performances, celebrations of saints (which can draw millions of devotees), poetry recitations, and dhikr (meditation, or remembrance) ceremonies.

“I was surprised to find that the Sufi orders and their practices still comprise a major part of contemporary social life. The shrine complexes are some of the most important public spaces, and in Afghanistan, for example, one of the only public spaces where women can actively participate. Sufism is resurfacing, possibly as a reaction to the rise of extremism, and as a result, historic texts relating to Sufism are being republished, which will greatly benefit my research. 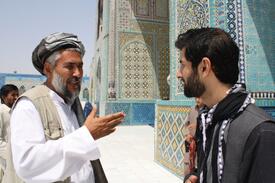 “I was perhaps most impressed by the nature of gender relations and cultures of hospitality. I was traveling with my wife, Mehreen Farooq, who is currently studying the role of religious organizations in creating grassroots campaigns to combat extremism for a D.C.-based think-tank. Mehreen and I were both welcome in religious gatherings, and scholars and Sufis – even in deeply conservative regions – graciously and professionally engaged her on her research topic.”

Waleed, who has been a numismatist since he was nine years old, is also writing a monograph on the coins of the Kashmir Smast, an early medieval cave temple in the Hindu Kush mountain range in Pakistan’s northwest frontier province. His work analyzes over 400 different types of coins found in and around the temple, which served as a center for commerce as well as worship from the fourth to thirteenth centuries. They reflect a diversity of faiths and feature symbols and scripts associated with the middle Iranian cults of Mithra and Ardoxsho as well as Buddhism, Zoroastrianism, Hinduism, and Islam. By analyzing the coins, Waleed is able to reinterpret the political history of the Kabul Valley and northern Pakistan. The numismatic evidence indicates, for example, that there was a fair degree of exchange, accommodation, and negotiation between Hindu and Muslim populations under the Muslim Ghaznawid dynasty, from 975 to 1186.

The site itself, located two hours from Peshawar in tribal regions outside of state jurisdiction, “is astonishing,” he says. A dirt roads leads from the village of Rustam to the village of Babozai, “where in the tradition of Pashtun hospitality, at least five families invited us to stay with them, and showered us with barbequed kebabs and sweet dishes. The cave has not served as a pilgrimage site since the 12th to 13th century, but locals still make the journey to reach a well at the base of the valley which boasts the purest water in the region with purportedly supernatural healing qualities.”

From the second village, they trekked for three hours to reach an ancient trail where shallow caves that once served as monastic cells are carved into the rock.

“Upon reaching the lush valley which houses the Kashmir Smast, the trails split into three directions, one leading to ruins on the mountain, another into the valley the well, and the third joins up with a rather precarious ancient staircase on the edge of the mountain, leading to the great cave. It’s a difficult climb – only three of the seven of us made it there.

“The entrance of the cave is sixty feet high, with a breathtaking view of the valley. It leads into a vast limestone chamber, the first of three main chambers of the temple, with a 100-foot-high ceiling. About 200 feet into the first chamber is a set of ruined stairs leading to the second chamber, which is entirely dark. At the base of the ascent, the faint sound of running water can be heard. Upon entering the second chamber, I realized that the sound I had heard earlier was actually the shrieking of hundreds of bats which inhabit the inner cave. After the second chamber, 150 feet further, another ruined staircase rises to the right, into the third and most magnificent chamber, which is illuminated by a natural opening on the ceiling of the cave over 100 feet above, where ruins of two small structures still stand. A number of smaller caves which served as monastic cells lead out from this chamber, which required me to climb almost 50 feet down and crawl through narrow passages infested with tarantulas (which I was only later informed are not harmful).”

Waleed recently published a five-part series for Foreign Policy magazine on Pakistan and Afghanistan with his wife. He has also published several op-eds for The New York Times, International Herald Tribune, and other papers on the historical roots of contemporary conflicts.

A native of Pakistan, Waleed grew up in several countries in Asia, Africa, and North America, with Urdu as his first language. After earning his BA from Yale in 2002 with a double major in Near Eastern Languages & Civilizations and Economics, he spent eight years in the private sector as an economic consultant in Bucharest, Washington, and Montreal while researching, writing, and speaking on Islamic history and thought. He returned to Yale to begin his graduate studies in history in 2010.