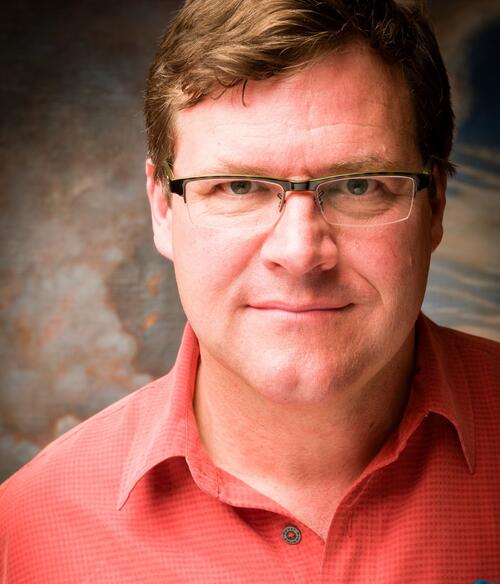 At the Museum of Natural History, Johnson oversees more than 460 employees, an annual federal budget of $68 million, and a collection of more than 126 million specimens and artifacts – the largest collection at the Smithsonian. The Natural History Museum hosts an average of seven million visitors a year, and its scientists publish about 500 scientific research contributions a year.

“Kirk brings an established national and international reputation as a top scientist, educator, and museum administrator to the National Museum of Natural History,” said Wayne Clough, secretary of the Smithsonian. “He is a perfect match to lead the museum – among the very best in the world – into the next decade.”

“Natural history museums are incredible places, where people have the opportunity to interact with scientists, scientific discovery, and to experience the wonders of world,” said Johnson. “As a scientist and a communicator, I am thrilled to have the opportunity to lead the nation’s natural history museum into the 21st century. I’ve always been attracted to museums, since I was a little kid. I grew up visiting the Burke Museum in Seattle, and while I was at Amherst College, I worked at the Pratt Museum” [now called the Beneski Museum of Natural History]. One of the reasons I came to Yale was because of the Peabody Museum,” he says. “Being part of the Peabody was a real highlight for me. I loved seeing the Rudolph Zallinger murals every day” in the Great Hall of Dinosaurs, he recalls.

As a graduate student, Johnson’s office was located in the Peabody, and “like most graduate students, it seemed I was there 24/7.” He did extensive fieldwork in the American West, and assembled a huge collection of specimens that are now part of the museum, “about 13,000 fossil plants that I found mostly in Montana, Wyoming, and the Dakotas.” He worked closely with Leo Hickey, professor of Geology & Geophysics and curator of paleobotany at the Peabody. “I had heard him speak about his work in the Canadian high Arctic in 1983, and I thought, “This is what I need to do.’ ” Hickey became Johnson’s mentor and adviser, and they remain good friends and colleagues.

Johnson’s own research – then and now – focuses on the geology and fossil plants of the Great Plains and Rocky Mountains from 34 to 145 million years ago and the Cretaceous-Tertiary (K-T) boundary extinction event. His work on fossil plants is widely accepted as some of the most convincing support for the theory that an asteroid impact caused the extinction of the dinosaurs. Johnson also explores the origin of biomes, and his research has taken him to Alaska’s Bering Sea, the Brazilian Amazon, the Canadian High Arctic, the rainforests of New Zealand, the Gobi Desert, India, Patagonia, Egypt, China, and all across the American West. Between October 2010 and July 2011, he led an excavation in Snowmass Village, Colorado, that recovered more than 5,400 bones of mammoths, mastodons, and other ice age animals. He has written nine books – most recently Digging Snowmastodon: Discovering an Ice Age World in the Colorado Rockies (People’s Press, 2012) – edited seven scientific volumes, authored numerous scientific papers, and has served as the associate editor for Cretaceous Research.

Before coming to the Smithsonian, Johnson was chief curator and vice president of research and collections at the Denver Museum of Nature & Science. At the Denver museum, which he joined in 1991, Johnson supervised a 70-person research and collections division and led the completion of the museum’s first comprehensive long-term collections and research plan. From 2001 to 2006, he was the chair of the museum’s department of Earth sciences. He was one of two scientists who led the development of “Prehistoric Journey,” the museum’s permanent exhibition about the history of life on Earth. During his years in Denver, he supervised the Denver Basin Project. Construction excavation in the Denver metro area uncovered a variety of plant and animal fossils, including the remains of extinct tropical rainforests, mammoth tusks, and the partial skeleton of a Tyrannosaurus rex. The results of this research have led to a better understanding of Colorado’s ancient landscapes and the formation of the Rocky Mountains.

Johnson earned his bachelor’s degree in geology and fine arts from Amherst College and a master’s degree in geology and paleobotany from the University of Pennsylvania. After Yale, Johnson was a postdoctoral research associate in the department of botany at the University of Adelaide in Australia, and he has been a research associate at the Burke Museum of Natural History and Culture in Seattle since 1991.