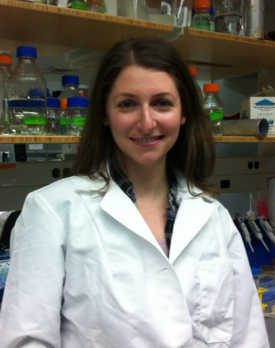 Nora Kory (Cell Biology) has won a predoctoral fellowship from the American Heart Association to study how cells metabolize fat to generate energy. This process is important to understand, because when it doesn’t work properly, it can lead to diseases such as diabetes and heart failure. Her work involves determining the function of an uncharacterized enzyme present on lipid droplets, the fat storage sites of cells. She is conducting biochemical and cell biological studies as well as physiology experiments using a genetically engineered mouse in which collaborators at UCSF have inactivated, or “knocked out,” the gene encoding this enzyme. Her goal is to understand its role in cell function and energy metabolism.

Nora transferred from Ludwigs-Maximilians University in Munich when her adviser, Tobias Walther, joined the Yale faculty. A native of Germany, she is a dual citizen of Austria and Israel. She earned her undergraduate degree from Ludwigs-Maximilians University. In addition to her scientific research, Nora sings with the Yale Camerata and studies voice at the Yale School of Music. The Camerata’s next concert will be April 19 at 8:00 pm in Woolsey Hall, where they will perform Dvorák’s Stabat Mater with the Yale Glee Club and Yale Philharmonia. 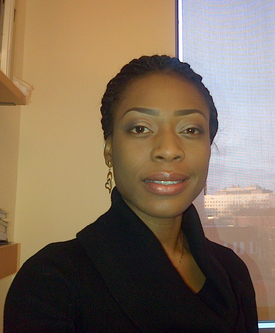 Omotooke Arojo (Immunobiology), a second-year graduate student, has co-authored a review article in International Immunology titled “Autophagy and selective deployment of Atg proteins in antiviral defense.” Autophagy is a cellular process that allows cells to degrade and recycle intracellular material. “This review discusses recent findings that show that autophagy is an important component of our immune defense against viruses,” she says. “The autophagy machinery cooperates with the host immune system to degrade and eliminate viruses, and it also selectively transports components of the virus to specific cellular compartments where the host is alerted to the infection.”

Omotooke has submitted a second co-authored paper to Nature on the regulation of mTOR by an adaptor called Sin1. mTOR is a critical protein that regulates cell growth and metabolism; its dysregulation has been implicated in diseases like cancer, obesity, diabetes, and immune disorders. Both papers came from her first year research rotations. She has since joined Professor Bing Su’s lab to conduct research on mTOR and has a third paper in preparation for submission that deals with how mTOR controls B cell blast growth in response to antigens.

Omotooke was born and grew up in Lagos, Nigeria. She completed her undergraduate degree at University of Ibadan with a concentration in veterinary medicine, but became interested in immunobiology after an undergraduate research project on the H5N1 avian flu. “I decided to pursue a doctorate to acquire both the technical and intellectual skills necessary to become a competent scientist. Yale seemed a good fit, because Yale has the best immunobiology program in the country,” she says.

In addition to her studies, Omotooke likes to bake and sing and is learning how to play the piano. 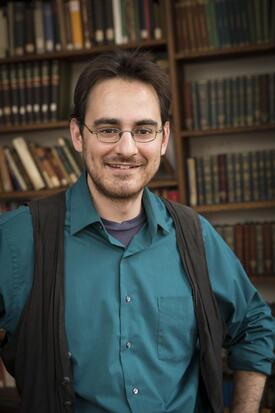 Joshua Alvizu (Germanic Languages & Literatures) has been very active in presenting his work at conferences recently. He read a paper titled “Thinking Poetry: Hölderlin, Heidegger, Badiou” at the American Comparative Literature Association’s conference held at Brown University in Providence last year. In the essay, he uses an example from the German poet Friedrich Hölderlin (1770–1843) and the ‘inaesthetic’ philosophy of Alain Badiou (b. 1937) to argue that the poem is “neither the privileged site of philosophical truth, nor can it make statements with truth value. In this conception, poetry is not merely an object to think about, but is itself something that thinks,” he says. He will again attend the ACLA conference in April, held this time in Toronto, to present “Start in the Middle! Montage & History in Benjamin & Godard,” which offers a comparative analysis of the montage practices in German philosopher Walter Benjamin’s Arcades Project (1940) and French filmmaker Jean-Luc Godard’s Histoire(s) du cinéma.

Josh also presented his work at the joint Yale-Northwestern colloquium on “Guilt,” held at Evanston last May; at the Yale-Universität Köln conference on “Morphomata,” held in New Haven in October; as well as at graduate student conferences at Amherst and Princeton last spring. He was awarded a FLAS Summer Fellowship for advanced language training in St. Petersburg last summer.

His dissertation, advised by Rainer Nägele, analyzes techniques of de-familiarization and montage in German and Russian theatre and cinema from 1918 to 1933. Next fall, he and Nägele will co-teach an undergraduate literature seminar closely related to that topic, titled “The Revolutionary Theatre,” through the Associates in Teaching Program. Josh clearly enjoys teaching: With other members of the German Department, he participated in a four-week outreach program at the New Haven Public Library, giving children a taste of German culture, language, and food.

Josh earned his undergraduate degree from the University of Colorado at Boulder, a master’s degree in German literature from Johns Hopkins University, and has done graduate study at Konstanz and Tübingen in Germany. He has also taught English at Bahçeşehir University in Istanbul, Turkey.