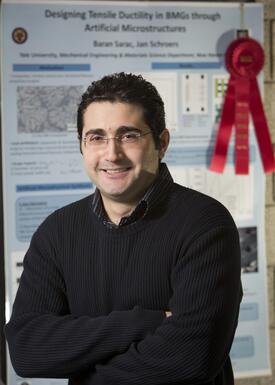 Baran Sarac (Mechanical Engineering & Materials Science) won the 2012 Materials Research Society Best Poster Award for his presentation titled “Designing Tensile Ductility in BMGs through Artificial Microstructures.” Tensile ductility is the ability of a material to stretch without breaking. BMGs are bulk metallic glasses: alloys that exploit the properties of both metals and glasses, including flexibility, strength, and durability. Ordinary metals are crystalline solids, with molecules ordered in a lattice structure. Glasses, on the other hand, are amorphous, or non-crystalline, solids. Combining both in layers less than 1mm thick produces a material with both elasticity and plasticity that has many potential medical, electronic, and commercial uses.

Baran’s entry was selected from among 2,000 posters presented at the society’s fall meeting in Boston on the basis of its technical content, appearance, and graphic excellence, as well as the quality of his presentation.

Baran, a native of Turkey, earned his undergraduate degree from Middle East Technical University. He is former president of the Turkish Society of Yale Graduate Students and Scholars and represents his department in the GSA. 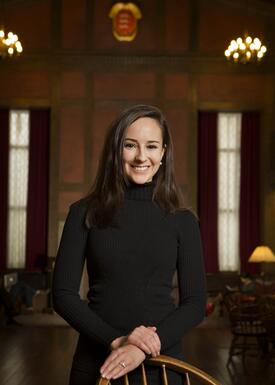 Rachel Rothschild (History of Science and Medicine) was awarded the Joan Robinson Prize by the Society for the History of Technology for her paper on the history of acid rain in Europe, presented at the organization’s annual meeting in Copenhagen. Candidates for the award are judged on the basis of their historical research and scholarship as well as on the effectiveness of their presentation. Rachel’s winning paper, “Détente from the Air: Monitoring Pollution and European Integration in the Cold War” was drawn from a chapter of her dissertation in which she evaluates the decision to form a European-wide environmental monitoring program (EMEP) in 1977 in the midst of the Cold War. The paper examines how Norwegian leaders reached out to the Soviet Union to form the EMEP after scientific collaboration and political negotiations already underway with their western allies had stalled. Rachel argues that “a new division in the west between ‘polluting’ nations and recipients of acid rain… opened the door for European cooperation on environmental policies and scientific projects across the iron curtain.”

Rachel’s dissertation, advised by Daniel Kevles, examines the scientific research and diplomatic negotiations undertaken to address the problem of acid rain in Europe. She analyzes how consensus was reached to set environmental policies, the role of intergovernmental and nongovernmental organizations to secure international agreements, and the development of legal instruments to seek solutions to air pollution.

Rachel is currently conducting archival research in the United Kingdom, Norway, France, and Belgium. Her project is supported by the American Meteorological Society, the American-Scandinavian Foundation, and the MacMillan Center for International and Area Studies. She is also the recipient of a National Science Foundation Graduate Research Fellowship.

She earned her BA in History of Science from Princeton University, as well as certificates in Environmental Studies and Creative Writing. After college, she worked on international and environmental legal issues with a law firm in Washington, D.C., before coming to Yale.

In addition to her academic pursuits, Rachel was a Team USA figure skater and winner of the senior national championship in synchronized skating as a member of the Haydenettes. 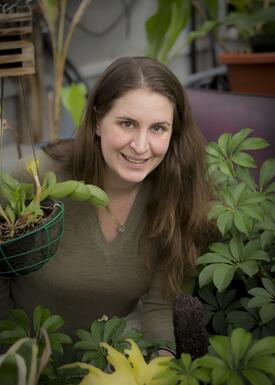 The presentation was based on research Marlyse conducted at the Yale-Myers forest in northeastern Connecticut and two forests associated with the University of Massachusetts. She studied how plants in the forest understory respond to forest harvesting. The understory is the part of a forest that grows below the canopy at the lowest height. Plants in the understory consist of a mixture of seedlings and saplings of canopy trees together with shrubs and herbs. She has found that “understory plant diversity differs in its ability to recover from disturbance depending on the soil type,” and recommends that “resource managers should consider the site and ground-story plant diversity when planning silvicultural treatments.”

Her dissertation, which will be advised by Ashton, will explore “the response of forest understory plant communities to different levels of anthropogenic disturbance,” she says. “Beyond its research value, I am mindful of how data in this area can be effectively applied to on-the-ground conservation actions. The legacy of agriculture and intense human use in New England make it an ideal location to study understory dynamics in a severely human-influenced site.”

Marlyse earned her undergraduate degree from the University of Connecticut in 1999 and worked in agriculture, horticulture, and landscape design before coming to Yale, where she completed a Master of Forestry degree in 2010. She is research coordinator for the Yale Forests as well as a Cullman Fellow in the graduate program at the New York Botanic Garden, which is affiliated with Yale. When not hard at work, she enjoys spending time with her husband Jed and their son Waylon.