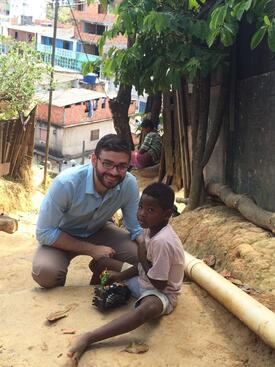 Every year, about 90 million people come down with the flu, including more than 100,000 children under the age of five who die of an illness that is usually preventable in affluent societies.

“Influenza disproportionately affects populations from resource-poor settings,” says Carlos Oliveira, a pediatrician who is working towards his PhD in the Investigative Medicine program at the Graduate School.

“Among all pediatric influenza deaths, 99 percent occur in developing countries,” he says, but “only a minority of health research addresses these issues. In temperate climates, influenza has a well-defined seasonality. In contrast, little is known about either the burden of disease or the seasonality of influenza in the tropics, particularly in Brazil.” Flu vaccines are part of Brazil’s national childhood immunization program, but to prevent more influenza deaths, physicians need more information about when to administer the vaccine and to whom.

Oliveira is working to change that. He participated in a pilot study of flu-like illnesses in Brazil led by Dr. Guilherme Ribeiro from Fiocruz, the Brazilian equivalent of the NIH, with Yale professors Dr. Albert Ko, chair of Yale’s Epidemiology of Microbial Diseases; Dr. Eugene Shapiro; and Dr. Daniel Weinberger.

“We conducted community-based enhanced surveillance for acute febrile illnesses among patients in a slum community emergency unit in Salvador, Brazil,” Oliveira explains. “The findings from our study will provide important information that hopefully will not only inform local immunization policy, but also serve as a launching pad for future studies on the effectiveness of influenza vaccines in Brazilian slums.”

Oliveira, who has dual US/Brazilian citizenship, was born in Peru to a Brazilian family. He lived in several countries in Central and South America before coming to the U.S. to earn a bachelor’s degree from Dallas Baptist University. He studied medicine at the University of Texas, Southwestern Medical Center in Dallas and did his pediatric residency at the Children’s Medical Center, also in Dallas. He came to Yale to train in pediatric infectious diseases and decided to stay and earn a doctorate.

“My decision to pursue a PhD was based on the knowledge that I needed further skills in data analysis, study design, and clinical epidemiology,” he says.

For Oliveira, the determination “to pursue a research career in global infectious diseases was informed by life experiences and strong role models. As a child, while living in Peru and Brazil, I witnessed many of my friends and neighbors suffer from infectious diseases that normally would not occur in developed countries. During my medical training, I learned that scientific knowledge and leadership could play critical roles in improving the health of those most impacted by infectious disease. Nevertheless, I did not feel the pull of global health until I met two physician-scientists from Yale University: Dr. Shapiro and Dr. Ko. Both of these physicians have dedicated their lives to conducting research to improve the health of underserved communities. Their multidisciplinary approach and their deep sense of social justice are a true inspiration to me,” Oliveira says.

“My ultimate goal is to teach and partner with physicians and scientists overseas to conduct the research necessary to elevate the standards of healthcare in underserved communities. I know that the excellence of the faculty and curriculum in the Investigative Medicine Program at Yale will be crucial in helping me accomplish my goals.” 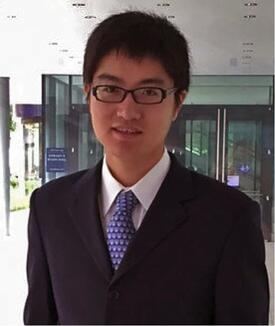 Lawrence Jin (PhD 2015, Management) is one of just six students worldwide — and the first Yale PhD student ever — to win the “AQR Top Finance Graduate Award.”

The prize honors graduates whose dissertations and research carry the greatest promise of making an impact on finance practice and academia. Jin was recognized for his job market paper, titled “A Speculative Asset Pricing Model of Financial Instability,” and for his research in asset pricing and behavioral finance. His research focuses on building models that feature less than fully rational decision-making on the part of some investors and models that feature frictions of some kind, especially financial frictions such as conflicts of interest between shareholders and management. These models — when carefully studied — can be very helpful for understanding asset price movements and macroeconomic fluctuations in financial markets. Nicholas Barberis, the Stephen and Camille Schramm Professor of Finance at Yale; and Jonathan Ingersoll, the Adrian C. Israel Professor of International Trade and Finance, are his advisers.

Jin will join the faculty at the California Institute of Technology as an assistant professor of finance next fall.

He and the other 2015 honorees were invited to present their research at Copenhagen Business School (Denmark) in June. His previous work has also received recognition. A paper titled “X-CAPM: An Extrapolative Asset Pricing Model,” co-authored with Barberis and Harvard University Professors Robin Greenwood and Andrei Shleifer, received the Q-Group’s 2014 Jack Treynor Prize and was published in the Journal of Financial Economics earlier this year. Another paper, “Realization Utility with Reference-Dependent Preferences,” co-authored with Ingersoll, was published in the Review of Financial Studies.

Jin was born and brought up in Beijing, China. He earned his undergraduate degree from Tsinghua University with a major in physics and mathematics and his master’s degree from Caltech with a major in electrical engineering. His non-academic interests include painting, piano, and tennis. 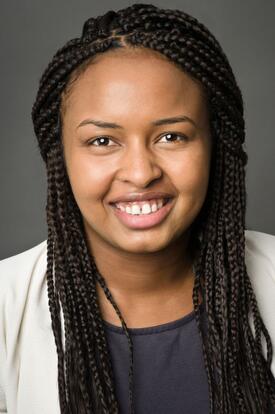 First-year graduate student Ayan Hussein (Neuroscience) was recently chosen to receive a Paul & Daisy Soros Fellowship for New Americans. She is one of 30 new PD Soros Fellows, selected from a pool of 1,200 applicants. She also won a 2015 National Science Foundation Graduate Research Fellowship.

Hussein became a citizen of the United States just one year ago, and remembers that day vividly:

“On May 30th of 2014, I stood among other immigrants during the oath ceremony. With my hand on my heart, I pledged my allegiance to the United States of America and swore to defend its Constitution against all enemies. Suddenly, I was filled with an overwhelming feeling of gratitude, and tears rolled down my cheeks as I stared down at my naturalization certificate. For the first time in my life, I felt like I belonged somewhere. I had dreamed of and waited for this moment for eleven years.”

Hussein was born in Mogadishu, Somalia, right before the civil war broke out, to parents who had no formal education. She and her family sought shelter in a refugee camp in Kenya when she was a toddler, and in 2003, when she was a teenager, were resettled with a relative in Clarkston, Georgia.

High school was a struggle. “I did not know where I fit. The language barrier and the cultural shock I experienced in my freshman year made me a target for bullies. I did not dress or speak like everyone else. With the help of an ESOL teacher and a school counselor, I became comfortable with my status as a Somali immigrant and started focusing on getting into college.”

College presented its own problems. “Even with a full scholarship and a strong desire to learn, I couldn’t help but feel like an imposter who did not belong at the University of Georgia,” she says. “This feeling was exacerbated by the realization that I was poorly prepared for college. I did not know how to manage my time, and my study habits were not up to par with my counterparts. Unfortunately, this was reflected in my grades first semester of freshman year. I quickly learned that I had to ask for help if I wanted to perform better. I sought mentors and utilized the various resources that were offered on campus, such as the writing center. I also took on leadership roles in different organizations and worked as a desk assistant for the University Housing Department for two years.” Working, studying, and “experiencing the challenges that come along with being a first generation student” taught her how to find balance and resiliency.

She discovered her passion for neuroscience at the University of Georgia, with support from a Bill and Melinda Gates Foundation scholarship. Her enthusiasm for laboratory research grew even stronger while studying at the University of Oxford as a visiting scholar in her senior year.

After graduating from college in 2012, Hussein was a PREP Scholar in the lab of Hirofumi Morishita at Mount Sinai Hospital’s Icahn School of Medicine. She investigated the molecular mechanism of brain plasticity in an effort to provide novel therapeutic targets for amblyopia (“lazy eye”) and other neurodevelopmental disorders.

“I decided to participate in PREP because I was not sure if pursuing a doctoral degree was the right decision for me,” she says. “I was hesitant because of a number of factors: I did not have ‘wet lab’ experience, which is crucial, and I was concerned about how long it would take me to complete the degree. The support and encouragement I received from the PREP committee, especially the PREP director, Dr. Terry Krulwich, and the research guidance I received from Dr. Morishita and the entire lab solidified my passion for neuroscience research and academia. This was the motivation I needed to pursue a doctoral degree.”

At Yale, Hussein studies the role of GABAergic interneurons in neural circuit development with In-Jung Kim in the department of Ophthalmology and Visual Science. Her research will provide insights into how dysfunction of inhibitory interneurons impacts the development of brain circuits in disease.

In the Interdepartmental Neuroscience Program, she says, “I found a home — a community of people, both faculty members and fellow graduate students, who are genuinely invested in my success as a graduate student. This has made my transition to graduate school and to New Haven very smooth.

“I did not know what to expect of New Haven when I moved from New York City. Living in New Haven has been a pleasant surprise. I enjoy exploring the restaurants and art scene the city offers. I recently discovered the Yale Cabaret and thoroughly enjoy their plays. I was an angry teenager in high school, and one of my outlets was journaling. As an adult, journaling remains an important pursuit. I recently picked up photography and plan to dedicate more time to it.”

Hussein says her “journey to Yale would not have been possible without the support and encouragement of great mentors.” To help others succeed, she became a Gates Millennium Ambassador in 2008, connecting the Gates Millennium Scholarship Foundation with future scholars.