Land, Libel, Litigation, and ‘Unwomanly’ Behavior in the Early Republic 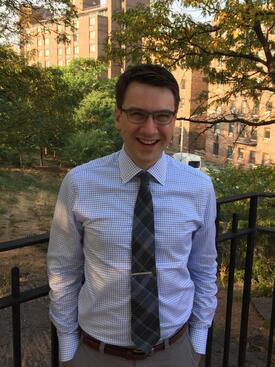 Michael Blaakman (History) is writing a dissertation on “land mania” during and after the American Revolution. “Speculation Nation: Land and Mania in the Revolutionary American Republic, 1776-1803” explores the corruption that lay at the intersection of government, capitalism, and empire. Joanne Freeman is his adviser.

The quarter-century after American independence saw “the first, frenzied wave of land speculation to sweep the young republic,” he says. He analyzes speculators’ motives, their political and business methods, and their “knotty relationships with the new and fledgling state and national governments that agreed to sell them expropriated Native American (and Loyalist) lands in staggering quantities.”

Blaakman has discovered that “this period of political flux created opportunities for speculators to try to position themselves to finance and profit off the expansion of the young republic's agrarian political economy; they attempted to convert both the ideals and the political messiness of the American Revolution into avenues for gain.”

He was drawn to the period because it was “an era of radical contingency on many fronts: politics, gender, labor, capitalism, race,” he says. “It makes an excellent laboratory for studying how change happens over time — and we still live and grapple with many of the period's consequences.”

On the side, Blaakman is digging into another fascinating aspect of American history: the life and times of Martha Bradstreet, an outspoken woman who lived in the early nineteenth century. Born in Antigua and raised in revolutionary Ireland, Bradstreet immigrated to the United States as a newlywed, hoping to claim a large landed inheritance in upstate New York. She arrived to find that most of the property had been fraudulently sold. Blaakman’s research reconstructs Bradstreet’s lifelong legal campaign to recover the land, which required her to cross oceans, secure a divorce, fend off malice charges, court public opinion, learn property law, and launch dozens of lawsuits — several of which made their way to the United States Supreme Court. An article based on this work, titled “Martha Bradstreet and the 'Epithet of Woman': A Story of Land, Libel, Litigation, and Legitimating 'Unwomanly' Behavior in the Early Republic,” was published in the Summer 2015 issue of Early American Studies.

Blaakman more or less stumbled onto Bradstreet in the fall of 2010, during his first semester in graduate school, when he was taking “Research in Western and Frontier History,” a seminar co-taught by History Professor John Mack Faragher and George Miles, curator of the Beinecke's Western Americana Collection.

“George is a Yale treasure,” Blaakman says. “He has a reputation as an intellectual matchmaker, pairing naive and directionless new graduate students (like myself at the time) with rich and underused collections at the Beinecke, ripe to be studied and written up. At the beginning of that semester, I told him that I was interested in the colonial and early republic periods and, other than that, had no specific topic in mind. I think Martha Bradstreet was the first thing he suggested.

“A nineteenth-century steamer trunk full of Martha Bradstreet's papers and belongings had been discovered in the attic of a working-class Schenectady home in early 2000. This was a truly rich trove: thousands of maps, real estate papers, legal documents, and letters —many of them bearing the names of prominent nineteenth-century New Yorkers, including Aaron Burr — along with early photographs and a lost eighteenth-century oil portrait, all of it belonging to this obviously brilliant early American woman whom nobody seemed to know much about. Sadly — almost tragically, for those of us in the history biz — no single buyer emerged to purchase the whole collection. It was sold in 187 lots to dozens of buyers, and a coherent documentary record was scattered to the wind.”

“Chunks of the collection wound their way through the world of rare book and manuscript dealers and into research archives. The oil portrait was sold for $40,000 and now belongs to the Smithsonian's National Portrait Gallery.” The Beinecke acquired some of the documents in 2009: “three boxes full of mostly surveyors' maps and memos, little of it interesting in isolation,” Blaakman says.

Among all the uninspiring documents was the manuscript draft of an extraordinary pamphlet, “An Offering at the Altar of Truth,” by Martha herself. “The pamphlet is really a piece of work. It's an utter tirade against all the landowners, judges, clerks of court, and lawyers who, Bradstreet felt, had stolen her landed inheritance (part of it, at least) and were obstructing her attempts to get it back.”

What took Blaakman by surprise was “how Bradstreet’s rage and frustration jumped so immediately off the page. The manuscript is a tangled mess of vivid denunciations, accusations, epithets, asterisks, and insertions. According to everything I knew about cultural ideals of womanliness in the early republic, this pamphlet was wildly transgressive. So it raised a lot of questions for me. It seemed that this woman's saga formed a compelling chapter in the history of early American women — and, in particular, could shed new light on how they navigated not only widespread notions of acceptable womanly behavior but also legal disabilities when it came to property and marriage. It was also clear that no historian had ever told Bradstreet’s story. I was hooked.”

To uncover more about Martha Bradstreet's life, Blaakman visited other archives where chunks of her documents had landed. On and off in the years that followed, he continued to pursue the topic.

“In early 2012, deep in a Google search, I discovered that another chunk of the collection was up for sale by a minor manuscript and antiques dealership called RJM Autographs and Antiques. They were asking a hefty price for the material, but based on their website's sketchy description, I could tell that it contained some very important stuff.”

Included in this batch of material was a series of letters between Martha and her husband, whom Blaakman calls “a drunk and abusive former Irish revolutionary named Mathew Codd.” The letters date to the period in which their marriage was disintegrating, in 1808.

“I had known that Bradstreet was divorced, and so I had read the pertinent scholarship on marital conflict and divorce in early America. Nearly all of those studies are based on two particular sets of very public sources: legal and court records, and notices that aggrieved husbands would place in newspapers alerting neighbors not to extend credit on their behalf to their estranged wives. To have direct correspondence between a husband and wife as their marriage was falling apart is something really special: a rare window into the deeply private world of an early American marriage on the rocks… this was uncommon source material, perhaps unique in the early nineteenth-century documentary record.”

He approached Miles and urged him to acquire the lot for the Beinecke, despite its high price. To Blaakman’s delight, the curator quickly agreed.

“I think it was a ten-minute meeting. The papers arrived within a few weeks and were just as rich as I'd hoped.” The documents became central to Blaakman’s understanding of how Bradstreet negotiated early American gender norms. “In five years at Yale, I think that experience more than any other demonstrated to me Yale's awesome ability to support its researchers,” he says.

Although the article has now been published, Blaakman feels that there’s a lot more to learn from Bradstreet’s papers. “I hope to keep piecing together more of her story in the years to come — new chunks of her documents are still surfacing in archival catalogs — and I plan someday to write a book about her. One of the things that drew me to Yale's history department was its longstanding commitment to good historical writing — that is, to crafting vivid stories as vehicles for making analytical arguments about the past. Yale historians helped lead the resurgence of historical narrative and the emergence of microhistory as a genre in the last decades of the twentieth century and the early years of the twenty-first. This approach to history encourages you to learn as much as you can about one very small thing, and then to place it in context. What I love about that is that you get to see up close how people navigated and reacted to broad structures and circumstances that lay mostly beyond their control. It's a very human kind of history, in that way. Piecing together Martha Bradstreet's tale was a great way for me to start learning how to do that type of scholarship.”

Blaakman says he has “had the history bug” as far back as he can remember. “I think, on some subconscious level, I decided to make it my profession because, personally, I have an awful memory, and it scares me to ponder the consequences of society at large havingas poor a memory as I do. So being an historian — contributing to and sharing knowledge about our past — felt like something worth dedicating myself to. Thankfully, I had the luxury and the privilege to make that choice. Neither of my parents is a college graduate, and they always insisted that my brother and I find careers that we love.”

Born and raised in Rochester, NY, Blaakman went to the College of William & Mary for his bachelor’s degree.

Teaching history is one of his “true passions,” he says. He draws “so much energy from students that it spills out of the classroom and into the rest of my life.” He also loves working as a Writing Advisor at the Graduate Writing Center, and for the past few years he has co-coordinated the Yale Early American Historians seminar. Outside of work, he likes to sail, sing in choirs, and take long drives and weekend trips around New England with his partner, Yale alumna Angharad Rebholz (BA 2014).