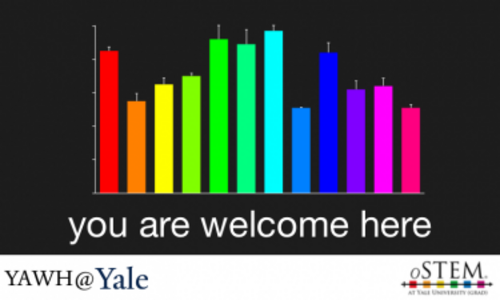 Have you spotted cards that say, “You Are Welcome Here”? YAWH cards began appearing on bulletin boards, in offices, and other spots on campus at the end of January.

The YAWH campaign is an initiative of Yale’s graduate chapter of oSTEM (Out in Science, Technology, Engineering, and Mathematics). oSTEM is a national organization dedicated to promoting and fostering leadership for LGBTQ+ communities in the STEM fields. The founding president of oSTEM is Eric Partridge, a former postdoctoral fellow at Yale. 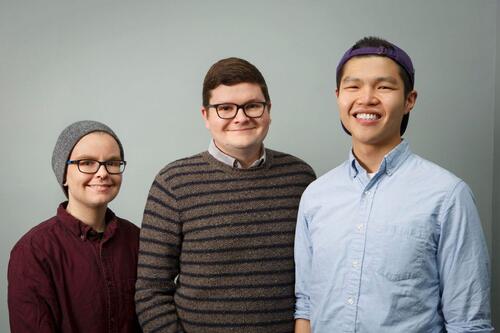 The goal of the YAWH campaign is to “promote the inclusion of LGBTQ+ individuals in STEM with a simple message: no matter your sexuality, gender identity, or presentation, you’re welcome in this space,” says Chris Lim (Molecular Biophysics and Biochemistry), one of the co-presidents of the local chapter. He hopes people see these cards and “feel empowered to catalyze discussions of identity in STEM spaces that traditionally suppress such discourse. The ultimate goal is to ensure that students across the LGBTQ+ spectrum feel comfortable in spaces that feel very ‘traditional,’ and minimize the degree to which queer students self-select out of the sciences because they don’t feel like they belong.”

Since the first cards were posted, “the support has been overwhelming,” adds Mac Crite (Microbiology), oSTEM co-president. “Many professors, students, and staff have reached out to us inquiring about the campaign and how they can best support it. Seeing the cards around campus and in the offices and labs of professors has certainly made me (and others I've spoken with) feel welcomed and accepted in a way that wasn't apparent prior to YAWH.”

Crite and Lim launched the oSTEM graduate chapter at Yale http://ostemgrad.sites.yale.edu/ in 2015.

“I was reading an article in The New York Times Op-Ed section titled ‘Why is Science So Straight?’ by Manil Suri, a professor at UMBC [University of Maryland, Baltimore County],” Lim recalls. “He argued that the ‘invisible’ nature of sexuality and gender, and the almost religious valuation of empirical neutrality in scientific culture dissuades young queer scientists from entering the field, or from expressing all aspects of their identity once they get there. I looked around and realized that, compared to Amherst College where I had several queer professors as mentors, I hadn’t seen the same level of representation here at Yale.”

“At our very first meeting, I saw value in the vision Mac and Chris had for increasing the visibility of queer STEM students at Yale and beyond,” recounts Stephen Gaughran (Ecology and Evolutionary Biology), oSTEM treasurer. “I realized that even among LGBTQ colleagues in my department, we didn't often discuss our identities in the office. oSTEM aims to change that.”

The Yale chapter works to build community, foster awareness among faculty and staff, and promote professionalism. Current members number about 100 and come from GSAS, FES, Public Health, and the Medical School. They gather for meetings about once a month, alternating social events with planning sessions. The organization welcomes anyone, regardless of sexuality, gender identity, or status at Yale. The next event is a Happy Hour on March 3 at the 168 York Street Café.

Spectrum, a new interview podcast focused on the human aspect of STEM, is another of the chapter’s projects. Produced by the Yale Broadcast and Media Center and hosted by Lim, Spectrum asks guests to explore how to foster a welcoming culture in research labs, how to succeed at graduate school when the science isn’t working, how one’s personal life intersects with being a scientist, and more. New podcasts are released every other Thursday and can be heard at http://ostemgrad.wixsite.com/spectrum. One recent podcast, posted on February 16, features Valerie Horsley, professor of Molecular, Cellular, and Developmental Biology.

“The future of oSTEM is bright,” says Crite. “It's amazing to me that students react so positively to our group. We'd love to become even more visible so that younger scientists can see it's not only possible to be an out queer student in the STEM fields, but that we thrive and are celebrated for our differences.”