Only about 15 students each year sign up for the rigors of earning both a PhD and an MD degree from Yale, a program that generally takes eight years to complete and currently enrolls a total of 96 future physician-scientists. MD/PhD students spend their first two years taking medical school courses and then do clinical rotations for six months before entering the PhD phase of their training, usually in January of their third year. They rotate through labs like other science doctoral students before choosing an area to explore for their dissertation research. 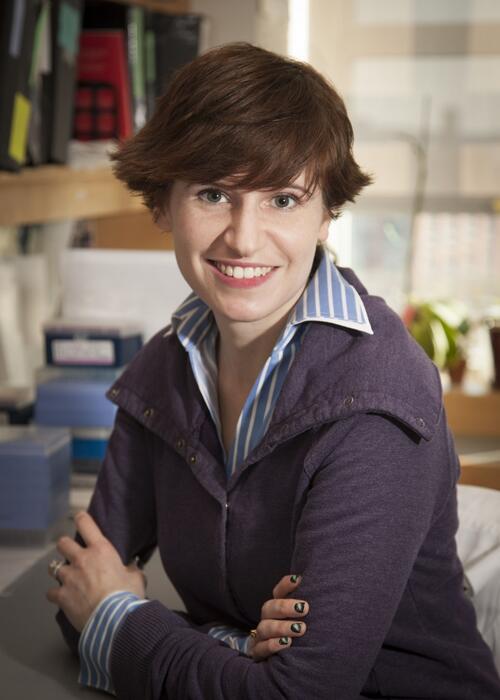 “The dual degree program is meant to provide trainees with a broad exposure to human biology and medicine, and to an in-depth and rigorous training in one of the scholarly disciplines relevant to medicine,” says James Jamieson, director of the program. “The ultimate goal of educating this group of students is to bridge the gap between basic research and clinical medicine.”

Allison Campbell (MD/PhD, Immunobiology) is one of these bridge-builders, joining bench science and the healing arts. After graduating from Amherst College with a major in biology, she worked for a year at the NIH, where she became interested in immunology and decided to undertake the challenge of the double program.

“I knew I wanted to do disease-relevant research, and autoimmunity seemed like a good fit,” she says. That led her to study systemic lupus erythematosus (SLE), an autoimmune disease in which the body’s immune system attacks its own healthy tissue. Patients with SLE may have inflammation in a range of organs, including skin, joints, kidneys, and brain. There is no cure for SLE, and the source of the self-antigens targeted by the immune system, “autoantigens,” is unknown.

Every day, billions of neutrophils die in the human body, she explains. Neutrophils are a type of white blood cell produced in bone marrow that circulate in the blood and respond to infection and other foreign invaders.

“Before our work, many people who study lupus thought that neutrophil death via a mechanism called ‘NETosis’ was the likely source of material that stimulated an autoimmune response. NETosis occurs when dying neutrophils release a web of DNA coated with anti-microbial proteins into the extracellular environment, forming a structure called a Neutrophil Extracellular Trap (NET),” she explains.

“I came up with the idea of looking at the role of a key protein called NADPH oxidase in lupus pathogenesis during my rotation in Mark Shlomchik’s lab. Mark was very enthusiastic about the idea, and together we came up with a way to test our hypothesis using a rigorous, in vivo genetic approach.

“We made lupus-prone mice whose neutrophils could not die by NETosis because they lacked NADPH oxidase. Contrary to expectations, not only did these mice still get lupus, but they got much worse lupus. This indicated something unexpected: that NADPH oxidase normally suppresses the disease, but when it is absent, lupus is exacerbated. We now suspect that without NADPH oxidase, neutrophils die in a way that inflames the immune system. Normal NADPH oxidase function and neutrophil cell death actually prevent disease.

“Our results fit well with human case reports linking boys who have an X-linked defect in NADPH oxidase and their carrier mothers to an increased predisposition to lupus.” Eventually, these findings could have clinical implications, helping predict the risk of an individual’s developing lupus and perhaps pharmacologically promoting the activity of NADPH oxidase to protect against or treat the disease.

Allison’s findings were published recently in Science Translational Medicine, a journal of the American Association for the Advancement of Science.

Outside of the lab, she enjoys exploring Connecticut with her husband Noah Capurso – a resident in Psychiatry at Yale. She also loves “baking elaborate culinary creations and furthering my continuing mission to seek out New Haven’s best truffle fries.”