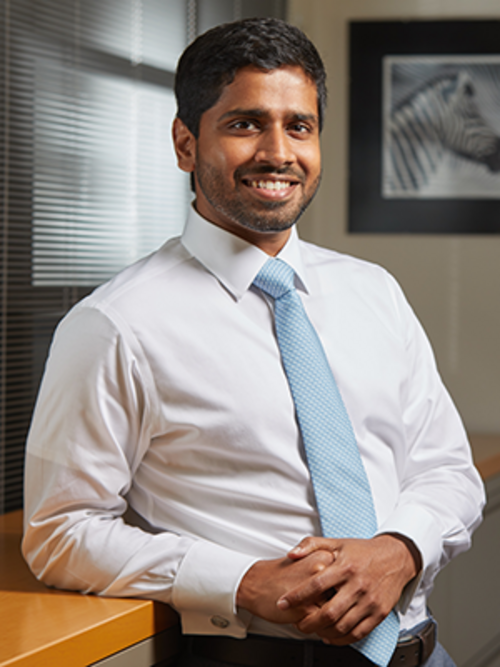 Damith Ayaska Fernando ’08 B.S., ’18 M.S. (widely known as Ayaska), the director of admissions at Yale School of Medicine (YSM) and a beloved member of the larger Yale community, died on Oct. 2 after a courageous battle with cancer. He was 35 years old.

Even at a university filled with gifted and special people, Ayaska stood out for his sharp mind, his analytic prowess, and especially for his charismatic, warm, and engaging personality. Upon his appointment as director of admissions at the School of Medicine, Laura Ment, a professor of pediatrics and neurology and associate dean for admissions and financial aid, praised him as a “data-driven change-maker with outstanding people skills.”

Her words were on the mark. In his three years as the school’s director of admissions, Ayaska helped lead strategic and technological improvements to admissions processes. He also enhanced the inclusivity of YSM’s student body and initiated new outreach efforts to attract creative and compassionate future physicians from across the country and around the world.

“Ayaska shaped the life and career trajectories of all of our current students. He was dedicated to making the school better one student at a time,” said Nancy J. Brown M.D., Jean and David W. Wallace Dean of the Yale School of Medicine.

Ayaska’s story is the kind a liberal arts institution likes to tell. He arrived at Yale as an undergraduate from Sri Lanka almost as an accident — his mother was impressed that Yale sent him two Viewbooks (likely a clerical error!) and persuaded him that this was an omen indicating he should apply. Knowing virtually nothing about Yale, he followed her advice, and was subsequently admitted. He left Sri Lanka for the first time to travel to Yale, becoming the first in his family to pursue a college degree.

As an undergraduate majoring in mechanical engineering, Ayaska worked in the admissions office but initially hoped to enter the financial world. When his offer to work at Bear Stearns collapsed during the financial crisis of 2008, then Dean of Admissions Jeffrey Brenzel — a sharp estimator of talent, who had observed Ayaska’s skills and personality — saw an opening. He persuaded Ayaska that his calling was not “accumulating capital,” but rather, “helping the university that had given so much to [him] to succeed and thrive in the 21st century.” From that moment on, Ayaska dedicated his heart and soul to Yale and its educational mission, soon becoming a beloved colleague, mentor, and friend to many.

“Under his leadership,” Quinlan said, “Yale built new processes and programs, greatly expanding Yale’s efforts to recruit the most talented scientists and engineers in the world.” Ayaska’s contributions, which included the creation and implementation of Yale Engineering and Science (YES) Weekend, a recruitment event for STEM admits, resulted in increased yield and a strengthened applicant pool.

Beyond his work in admissions, Ayaska and his wife Liz, associate director of institutional affairs at Yale, were active and devoted resident fellows of Jonathan Edwards College (JE). Ayaska had lived there as a student, and he and Liz were married in the college’s courtyard in June 2021. In JE, there was not a role Ayaska didn’t play; he advised students in the Great Hall, arranged the Paskus Mellon Fellowship dinners for seniors, played ping pong in the Buttery, convened happy hours and study breaks, and attended fellows dinners. His extensive knowledge and love of food and wine, along with his outgoing personality, enlivened every gathering.

A man for all seasons, he could play any tune on the piano by ear, emcee an event with charm and class, fix any computer glitch, help maintain the intimate beauty of the JE courtyard, or give aid, comfort, and support in any emergency.

Mark Saltzman, head of Jonathan Edwards, who described Ayaska and his wife as “pillars of the college,” noted that Ayaska “embodied all of the attributes you thought you would find in peers at Yale: intelligence, energy, ambition, and sensitivity.” Penelope Laurans, former head of the college, described him as “one of the Yale figures who, over time, has made Yale both a ‘company of scholars and a society of friends.’” A stroll down the sidewalk with Ayaska would inevitably lead to multiple conversations, as students, staff, and faculty stopped to greet him.

Ayaska’s influence extended throughout the campus. He was an enthusiastic athlete, a star swimmer and badminton player in high school, and, as both Yale student and fellow, a stalwart intramural water polo player and coach. He was part of a group that led JE to three consecutive intramural Tyng Cup championships, the first trifecta in its history. Ayaska became the de-facto older brother to fellow Sri Lankan students at Yale, enthusiastically leaning in at every turn to fill in the gaps for those far from home. He loved hiking and exploring the national parks in Sri Lanka and in the U.S., often spotting famously elusive wildlife with his “eagle eye” vision.

Ayaska was also a devoted Yale sports fan. In his honor, the football team (which recently kicked off its 148th season) held a sign during its season opener this September: “Team 148 is on Team Ayaska.” He could be found in the first row of every home basketball game, cheering the Bulldogs (and often ragging the opposing players whose statistics he had fully researched and digested). James Jones, the Joel E. Smilow Class of 1954 Head Coach of Men’s basketball, said: “Ayaska helped us win games. He was a true fan.”

In addition to his wife Liz, Fernando leaves his parents, Anura and Damayanthi Fernando, and his sister Piyumi ’13, a Ph.D. in biomedical engineering who works for Palantir Technologies. A celebration of his vibrant life, open to the public, will be held at 1:30 p.m. ET on Friday, Oct. 29 at the New Haven Lawn Club, 193 Whitney Avenue. Vaccination cards and masks will be required.

In lieu of flowers, the family invites you to help support the future as passionately as Ayaska did. Gifts can be made to FIRST at 200 Bedford Street, Manchester, NH 03101 or at https://www.firstinspires.org/donate. Please designate your gift in memory of Ayaska Fernando. The family also encourages you to share memories of Ayaska at http://tiny.cc/in-memory-of-ayaska.