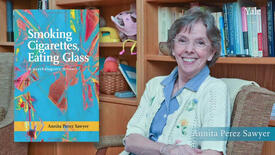 For more than half of her life, Annita Perez Sawyer (BA 1971, PhD 1981, Sociology) kept her troubled past a secret from all but a few people.

“The genie’s now out of the bottle,” says Sawyer, an assistant clinical professor of psychology at Yale, whose memoir, Smoking Cigarettes: Eating Glass, was recently published by the Santa Fe Writer’s Project. The book details Sawyer’s nearly six-year institutionalization for mental illness in the 1960s, beginning at the age of 17, when she was misdiagnosed as schizophrenic and treated with electroconvulsive therapy.

She also describes her journey from mental illness to becoming a psychotherapist herself, and how, some 40 years after her hospitalization, she learned the truth about her condition. Rather than being a chronic schizophrenic, as she was characterized in her hospital records, Sawyer actually suffered symptoms of post-traumatic stress disorder (PTSD) as a result of childhood sexual abuse. Now in her early 70s, Sawyer hopes that Smoking Cigarettes, Eating Glass might inspire current mental health professionals to be more careful in diagnosing their patients.

Growing up Westchester County, New York, in what she describes as an often “silent” and “repressive” family, Sawyer was an academically accomplished but exceedingly shy teenager who became suicidal when she was 17. She recalls in her memoir: “For years, I’d worried that as a human being I was despicable. I tried to be a good Catholic and go to church every week. Yet, no matter how much I prayed or confessed every bad thought, no matter how hard I worked at being kind and responsible, I couldn’t shake the conviction that I was evil at the core and didn’t deserve forgiveness. My mission was to rid the world of myself.”

In the summer of 1960, Sawyer was admitted to the Westchester Division of New York Hospital. There, her thrice-weekly shock treatment began. “Shock treatment felt like facing death again and again,” she recalls in her memoir, “not only because the doctor caused a seizure by shooting electricity through my brain, which meant I risked dying if he miscalculated, but because it also interfered with my memory. I’d wake up terrified, not knowing who I was, the world a meaningless blank. It was as if each seizure carved me into a new jigsaw puzzle, and I had to start from the beginning to figure out how the pieces fit together. There was no guarantee they would.”

After three years at New York Hospital, Sawyer was transferred to the New York State Psychiatric Institute in New York City. Though she had “dramatic holes” in her memory and frequently injured herself by burning herself with cigarettes, cutting, or other harmful behaviors, she eventually began to make progress in the care of Dr. Stanley Heller, whom she credits with literally saving her life.

“He was funny, and he ‘got’ me,” she said in an interview. “He had a calm demeanor, and he was persistent. It took a long time for me to improve. It didn’t happen quickly. But what he did was listen and pay attention. I felt that I mattered.”

In 1966, Sawyer was finally healthy enough to be discharged. She enrolled at Columbia University’s School of General Studies, determined to become a clinical psychologist. At Columbia, she met her future husband, Bill, who was taking courses there during a hiatus from Yale.

After an internship, Sawyer began working as a clinical psychologist. While she enjoyed her work and had a happy family life, she was troubled because so much of her childhood and adolescence was a blank. In 2001 she decided to request her hospital records from the New York Hospital and the New York Psychiatric Institute.

“When I read the records I felt such dismay to see the contempt that they had for me at the first hospital, and it filled me rage to see how, when the shock treatment wasn’t working, they simply decided to give me more.”

The records, along with her own professional training, jostled her memory and allowed her to understand the cause of her PTSD.

Her own psychotherapy practice was an oasis for her at the time, says Sawyer. Working with clients who also suffered traumas, often worse than her own, helped her “summon the energy” to continue her journey of recovery. She began writing about her experience while taking part in writing conferences and workshops, including the Wesleyan and Bread Loaf Writers Conferences. She also was a fellow at the MacDowell Colony, the Millay Colony, Vermont Studio Center, Ragdale, VCCA, and Hambridge. The product was her newly-published memoir. 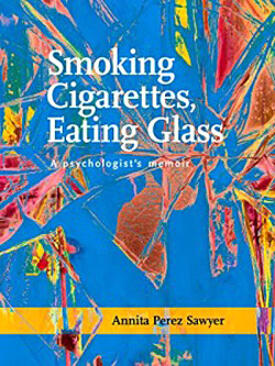 Sawyer hopes that her book will encourage mental health clinicians to pay closer attention to their patients. She also hopes her story will help free others of the shame that often accompanies sexual abuse and mental illness.

“Instead of being shunned as I feared, so many of my colleagues have endorsed me and supported me since I’ve shared my story,” she says. “I re-connected with old friends whom I had cut off during my hospitalizations, and discovered that they still cared about me. Telling my story has opened up a new world for me.”

Adapted from an article by Susan Gonzalez