My time in New Haven: The journey and experience of a woman at Yale before women at Yale

I attended Yale undergraduate classes from 1963 to 1965, the only woman in my classes. 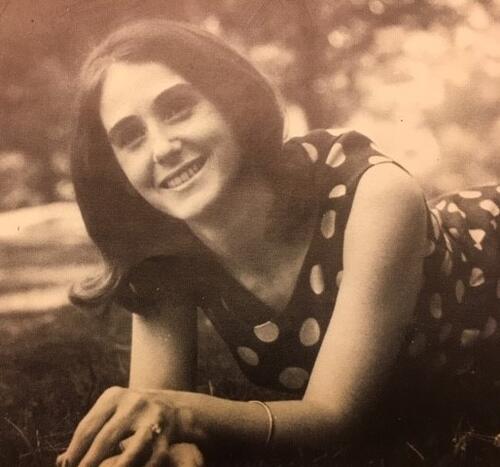 This was before Yale officially admitted women, and as such, I was not an official student, though I felt like one. I was the wife of a graduate student, Thomas Curtis ’68 PhD, and a mother. I really wanted a college education, and with the help of my husband's all-male undergraduate college, Kenyon, and of the graduate school of physics at Yale, I was able to do so as an auditor.

I took the best lectures on campus (as advised by a Skull and Bones man then at the law school). I learned more of what was best about Western civilization and also assimilated the implicit societal lessons addressed to male Yalies, of responsibility and leadership in America. As I drank in the Gothic atmosphere and enjoyed Sterling Memorial Library, homage in itself to knowledge, I felt akin to males my age. I paid attention to our culture, our government, and our country's place in the world, as well as our own responsibility to contribute, support, and lead.

These courses help explain that Yale message of the appropriate role for the generation of students:

While I did not know many students or engage in Yale's activities, I did enjoy the Long Wharf Theater, Ingmar Bergman at the local art film house, polo on Sundays in Purchase, N.Y., sailing at the boathouse and avoiding rocks in the Sound, attending concerts (Peter, Paul, and Mary) and Yale football games, and making furtive trips to a night spot playing blues on Dixwell Avenue.

In the spring of 1964, we in the Paul Rudolph Married Student Housing danced weekend nights to the Beatles (and saw them at their first concert in Queens). For a while, we were official chaperones for Yale fraternity dances and the prom, probably as we were young and would not dampen the fun (yet I was concerned about a Jerry Lee Lewis performance at a fraternity).

So far, this was all 1960s normal. But change was in the air. The Vietnam War was ongoing, and the Reverend William Sloane Coffin was a vocal participant in expressed opposition. There were demonstrations, many on the New Haven Green. The separation of the sexes was being rethought by academic institutions, and there were discussions about Yale merging with Vassar, a female college at the time.

I was told I could not get a Yale undergraduate degree because I was female, even though I had written papers and taken exams for the Yale courses. I could continue on to get a Yale master's degree, but I would have to go through life explaining why I had no undergraduate degree. This was deemed an insurmountable hurdle in the mid-60s, so I approached Vassar, which let me commute, take a reduced course load, do independent study in the summer, and gave credit for my prior college work at yet another institution and credit for my Yale work.

I attended Yale undergraduate classes from 1963 to 1965, the only woman in my classes.
This was before Yale officially admitted women, and as such, I was not an official student, though I felt like one.

And  thus, from 1965 through January 1968, I commuted to Vassar in Poughkeepsie, N.Y., over beautiful western Connecticut and southeastern Hudson Valley in New York. This drive gave me a chance to ruminate, enjoy fall colors and winter snow, and get to know Vassar students when I took them to New Haven on Thursday nights (they looked different, gussied up for their Yalie dates). If I traveled back late at night by myself, after Stirling Vassar Library closed, I assured my safety by wearing a fedora hat to appear as a man.

I managed to make almost every class and regarded this campus as a room of my own, an estate of my own, separate and apart from my married life and two preschool-age children.

This feeling of adventure came in part from Virginia Woolf's vision of what women needed to create: sufficient separate space and economic support. Woolf's “A Room of One's Own,” which I read at my secondary school Emma Willard, contrasted male and female experience in the world and its different creative contexts for the sexes. At least, Vassar provided a solid and prosperous setting for intellectual inquiry and creative development.

Still, it was a challenge at times to be an “extra,” in a different category than regular student – a commuting married mother of two who did not live in the dorms. Being out of the loop, I did not always get access to what was required. For example, I could not find a copy of Machiavelli's “The Prince” at Vassar or Yale bookstores or libraries of either college or New Haven, so I had to conjure up a paper based on a few preview statements by the professor.

Finally getting enough credits to graduate, in the fall of 1967, I was off the Vassar campus for the spring and so was not in the bureaucratic loop or informed of Vassar's lunch after graduation. So after many years of trying to get a degree, I had to celebrate with the family – girls, husband, and parents – at a fast food diner, as I had no reservation at college, increasing my “L'Etranger” mood.

Yet, I was happy to have had a Vassar education. Vassar when I was there emphasized independence, a “can-do” attitude, pragmatism, the search for information and truth, and the desire to enlighten the soul and toughen the mind. It pushed one to analyze, connect ideas, formulate opinions, and express those opinions. It also encouraged attitudes of adventure, daring, and self-value, for it would be up to us to create our own world in conjunction with or in opposition to the world we found ourselves in.

Just when I finished my college degree requirements, both Yale and Vassar became coed, in 1968-69. Kenyon did, too, and I am pleased that one of my daughters was accepted at Yale, Cathleen Curtis '84, and the other at Kenyon, Caren Curtis. 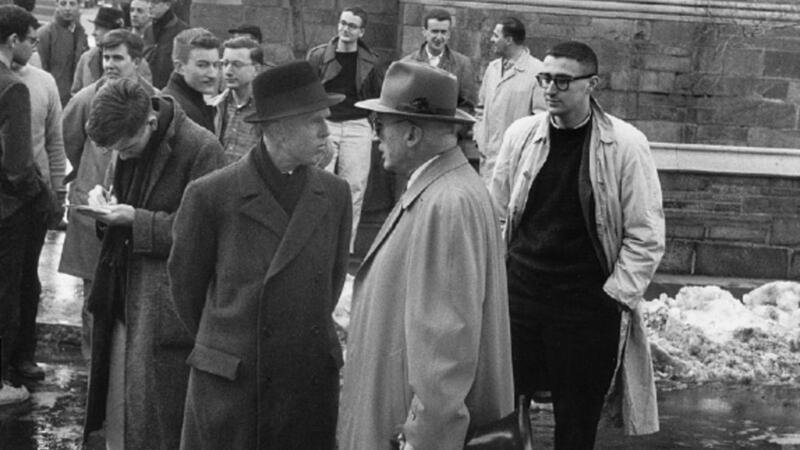 After finishing Vassar college course work in January 1968, I looked for a job in New Haven. But the best offer I could find was to compile a “Who's Who of American Library Science” (for minimum wage, contrasted with well-paying jobs offered Yalies in Manhattan). I did not accept this but decided to further my education. I thought eventually something else would turn up or that something would happen in society to change opportunities.

To figure out what further education I wanted to pursue, I audited courses in three different Yale graduate schools in the spring semester to see if the subject matter appealed. They were:

Law seemed more likely to improve the human condition, slowly accommodating, improving trends in Western culture. So I applied to law schools, even though only a few women were accepted each year. I was accepted by several law schools in the spring, determining where best to raise two young girls as a single parent, as I was getting divorced, and where it seemed that some societal change would be made. A dean of Stanford Law School told me most other women in my law school class were on wait lists, to see in the fall where the Vietnam conflict stood and whether they would be accepted as supplemental students.

Then, Martin Luther King Jr. and Robert Kennedy were assassinated (I had seen RFK campaign in New Haven in the spring of 1968 and noted his haunted eyes as he moved through crowds). These overwhelming deaths “bookended” my Yale times: the death of JFK in fall '63 and of MLK Jr. and RFK in spring '68.

These incidents reinforced my need to be involved in change. San Francisco and the West Coast were offering new approaches to our culture and so I decided Stanford Law School was a good bridge between East Coast-style establishment and West Coast-style culture. I was committed to a law-abiding, evolutionary path and felt it as a calling, in part the Yale lesson of public service (as lawyer and activist Ramsey Clark once told me, “Once you decide to go to law school, you are a committed evolutionary, not revolutionary, person”).

I am grateful to these academic institutions and the education, training, and lessons in value.
Thank you Yale and also to Vassar – what an impact you had on my life.

In fall 1968, I took a constitutional law course taught by Professor Gerald Gunther. He was so invested in the United States' Constitution, telling how he arrived as a little boy from Germany after Kristallnacht, seeing the Statue of Liberty in New York Harbor. He committed his life to preserving freedoms set forth in the Constitution, and I have too in my own way. I recalled the lessons, not only from Stanford Law School, but most particularly from Yale and Vassar, to use energy to “better” humanity and society and yet be an individualistic voice.

My concern is attention to cultural and political activity, expressed in written form or in legal or organizational work. I found it compelling to be told, “Your country needs you,” by the assistant state department head at OECD Paris in 1989. I chaired the California Comparable Worth Task Force, worked as an attorney for the California Legislature's Joint Committee on Legal Equality (to achieve gender equality in California's laws), and served as an attorney for Governor Jerry Brown's Department of Industrial Relations (I wrote/worked California's pregnancy leave law, carried by former U.S. Representative Howard Berman).

I was asked by the State Department to come to Croatia. (I did not go as it seemed too late to make a difference there, but not too late to inform citizens in the U.S. about the Constitution.) I have studied and written on government/constitutional law issues and taught from Professor Gunther's text book as an adjunct at UC Berkeley's Public Policy graduate school, taught from my textbook at the New York Public Library. And judged “We the People” high school debates in California.

I mention these just to note that I have been involved in public service, especially involving constitutional issues. A position in a Manhattan law firm after law school – an experiment in hiring a woman attorney – did not satisfy my need to be of public service and to be an individual.

I am grateful to these academic institutions and the education, training, and lessons in value. Thank you Yale and also to Vassar – what an impact you had on my life.

I feel gratitude for my excellent education and actually feel like Yale and Vassar were my true parental figures, in that they offered ideas and knowledge and enthusiasm for the future.

Christine Curtis lived in New Haven from 1963 to 1968. She earned her undergraduate degree from Vassar in 1968 and her law degree from Stanford in 1971, before embarking on a long career as a lawyer, advocate, and adjunct professor, as well as a painter and a screenwriter. She currently lives in California and also spends time in Paris and New York. She last returned to the Yale campus in 1984 for her daughter's graduation.