Last year, the Centers for Disease Control and Prevention issued a report stating that one child in 88 has autism or a related condition, leading to impaired social interaction and communication, restrictive and repetitive behaviors. Researchers around the world and right here at Yale are working to determine what causes autism and how to prevent, treat, and cure it. 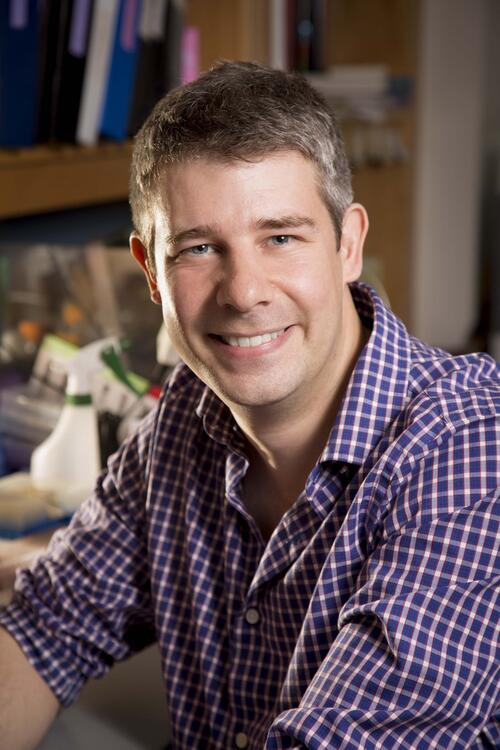 Graduate student Stephan Sanders (Genetics) is studying rare genetic mutations associated with autism as his dissertation project in Matthew State’s lab. His work was recently published in Nature and presented at a conference in Spain.

“There is strong evidence that autism is a genetic disorder, based on studies of identical twins and recurrence rates in siblings. However, the genes that are responsible have defied detection,” Stephan says. “Finding these genes is vital, since without them it is difficult to make progress in understanding the neurological problems that lead to the symptoms of autism.”

Stephan and his colleagues used a new technique that involved sequencing all the DNA bases that code proteins in the human genome (called the “exome”), comprising about 20,000 genes. “The new exome technology was developed by Richard Lifton and Murim Choi in the lab next door to us, and it provided the opportunity to investigate the genetics of autism at a resolution over 1000 times greater than had ever been done before, with the possibility of identifying specific genes.”

He looked for new (de novo) mutations that are present in a child with autism but not in either parent. Such mutations are extremely rare, he says. “We see roughly one base pair change in each family, despite looking at 35 million bases in each individual.” His study found that a subset of mutations, specifically ‘nonsense’ mutations that completely disrupt one copy of a gene, “is strongly associated with autism.” These mutations were observed roughly three times more often in the 200 individuals with autism than in their unaffected siblings. “This is very exciting, in and of itself, since we have shown that as a class these nonsense or ‘loss of function’ mutations are one of the causes of autism,” Stephan says.

The next part of the project focused on finding out “how many loss-of-function mutations we need to see in the same gene before we know that the specific gene is associated with autism.” So far, Stephan and colleagues have identified three new autism genes “with very high confidence, and more importantly, we have developed a method to find many more.” He estimates that they are on track to identify 37 autism genes by the end of 2014. He and his colleagues “were able to estimate how many genes in total play a role in autism. Surprisingly, the answer from the data is about 1,000 genes. This, in part, explains the difficulty of prior research to identify autism genes. It also shows the sheer complexity of autism,” he says.

Stephan’s preliminary findings are already transforming the way autism is understood. “Using simple methods of systems analysis, we can ask whether these genes share similar functions and can therefore hint at what biological processes cause autism,” he says. “Some of the answers challenge our understanding of autism. The top hit is ‘chromatin regulation,’ the process by which cells are programmed to form specific cells in specific locations. The data are telling us that there is a fundamental defect in the way that stem cells differentiate to form the human brain in individuals with autism. Seeing a result like this makes us appreciate the incredible research environment at Yale, since down the hall are scientists like Nenad Sestan and Jim Noonan, experts on human brain development and chromatin regulation, respectively, with whom we can collaborate to investigate what this new lead in autism etiology truly means.” Stephan’s interest in genetics began when he was six years old and his parents gave him a book about Nobel laureates James Watson and Francis Crick, who discovered the structure of the DNA molecule. “I can distinctly remember being fascinated that a simple code described an entire human. It had a cut-out 3D model of DNA which also captivated my interest. Thirty years later the code seems less simple,” he admits.

A native of England, Stephan trained as a pediatrician at Nottingham Medical School in the UK. He moved to New Haven when his wife, Imogen Hart, an art historian, took a position at the Yale Center of British Art. He became interested in pursuing a PhD in Genetics at Yale “due to the welcoming and collaborative environment, the amazing track record of research, and the investment in genomic technologies. Matt State, Rick Lifton, and Jim Noonan were all extremely kind and generous in considering an overseas pediatrician with minimal research experience.”

When not in the lab, Stephan likes to serve as an expedition physician. He was the doctor on several BBC TV shows that air on the Discovery Kid’s channel in the U.S. “Serious Andes,” “Serious Ocean,” and “Serious Livingstone” have taken children to climb Cotopaxi, the second highest peak in Ecuador; sail around Cape Horn in Patagonia; and face other extreme outdoor challenges. Most recently, his free time has been devoted to his baby daughter Xanthe, who was born in October at Yale New Haven Hospital. Becoming a father has given him “a fresh perspective on parenthood, pediatrics, and genetics,” he says. And a fresh appreciation for a full night’s sleep.